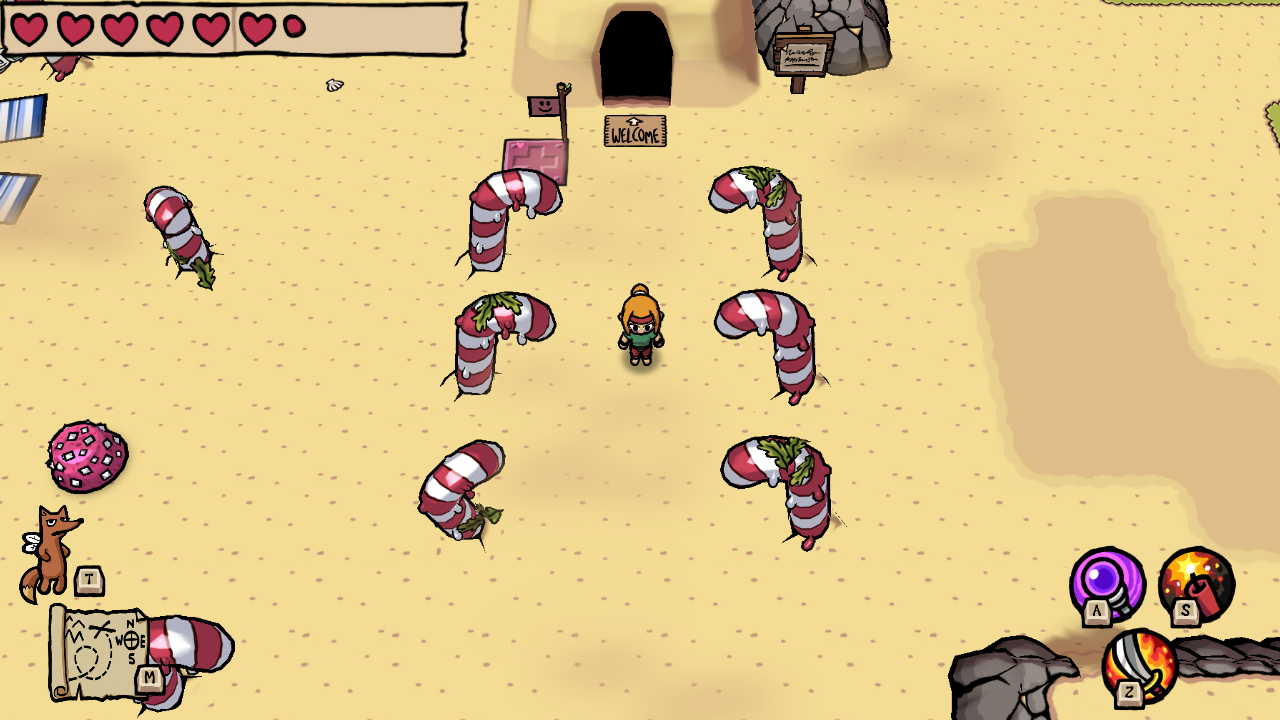 Ittle Dew 2 is the second game in this top-down Legend of Zelda-esque series from developer Ludosity. The first one was originally launched on the Google Play store and later seeing a fan base grow when it finally hit Steam. Although rough around the edges, Ittle Dew’s cute art style and unique humor are what kept people around and make this sequel welcomed.

We join Ittle and her Fairy Fox companion Tippsie as their raft wrecks onto a mysterious island riddled with dungeons and secret caves. To get off the island, you must build a new raft by finding the eight different pieces hidden around. If you thought that each one of these pieces would be in a dungeon, then you would be right. Just like all dungeon crawling action adventure games before it, Ittle Dew 2 offers up multiple enemies, puzzles and bosses. Let’s dive in and see if Ittle Dew 2 can improve upon itself and stand out amongst the crowded genre. 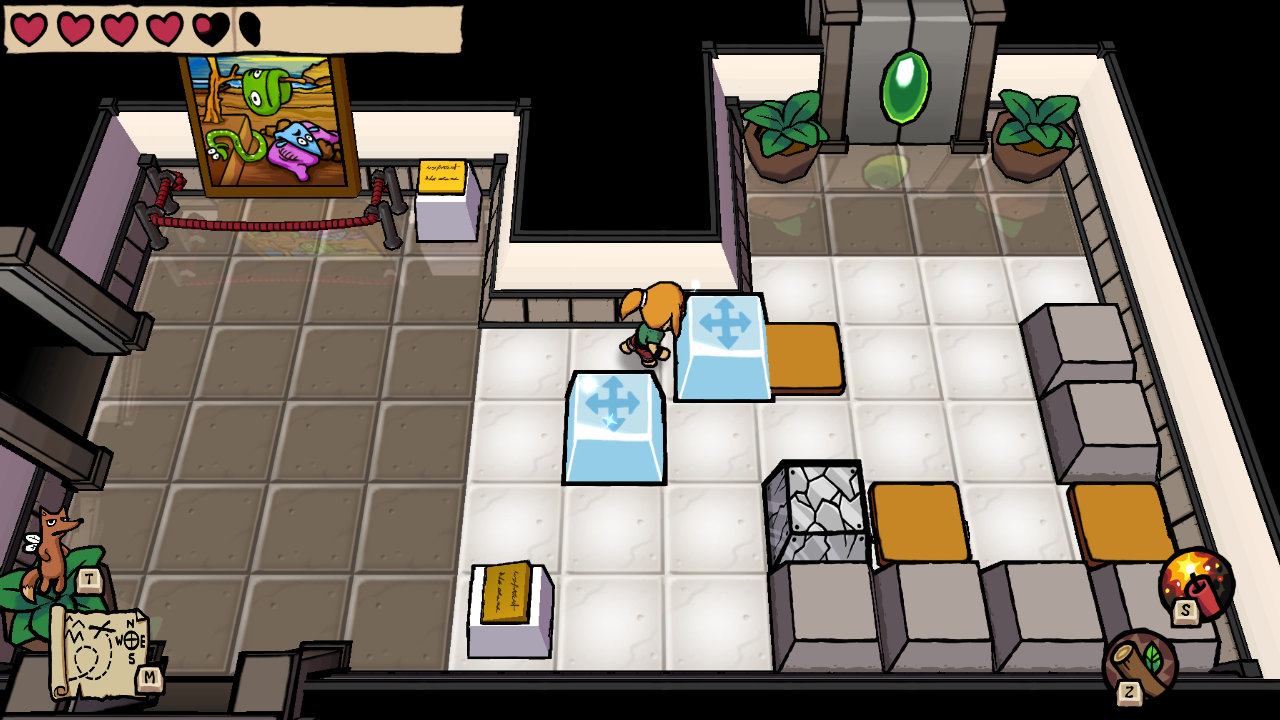 Gameplay – How Ittle Dew 2 feels has to be one of the best parts of this game. I can honestly say that this is the first time in a long time, that I have fully played through a game and not once felt like my missed shot or wrong step was due to the controls. Being able to get this right a huge thing to me, especially when many AAA developers can’t. So props to Ludosity for paying attention to the details that matter.

Humor – Throughout the whole game, this dynamic duo never takes anything seriously. Tippsie wants nothing more than to guzzle life potions (it’s like booze to him) and avoid making any effort. Tippsie is also the smart-*** of the two; he has something to say about everything, always. Even when they crossed the line into corny, I still couldn’t help but laugh at the banter between them. The characters are pretty entertaining as well, one of my favorite enemies is the bro ‘d out cactus. Maybe it’s because of the voices I use in my head to read their lines, but it still made me laugh, and that’s what counts.

World – Exploring the overworld feels real good in Ittle Dew 2. You’re able to go pretty much anywhere you want from the start, free to explore the world in whatever order you choose. Each dungeon is in a different section of the map, each section having its own style and set of caves. You can defeat most dungeons with just the stick you start with, but there will be many things that will have to be left behind until you upgrade or find more weapons. Being able to go everywhere makes the game a bit more interesting, as things can be much harder than they’re meant to be because of doing them out of order. I also loved the feel of the world; it had a very, everyone is broken here undertone to it no matter how happy or bright the surrounding environment felt. 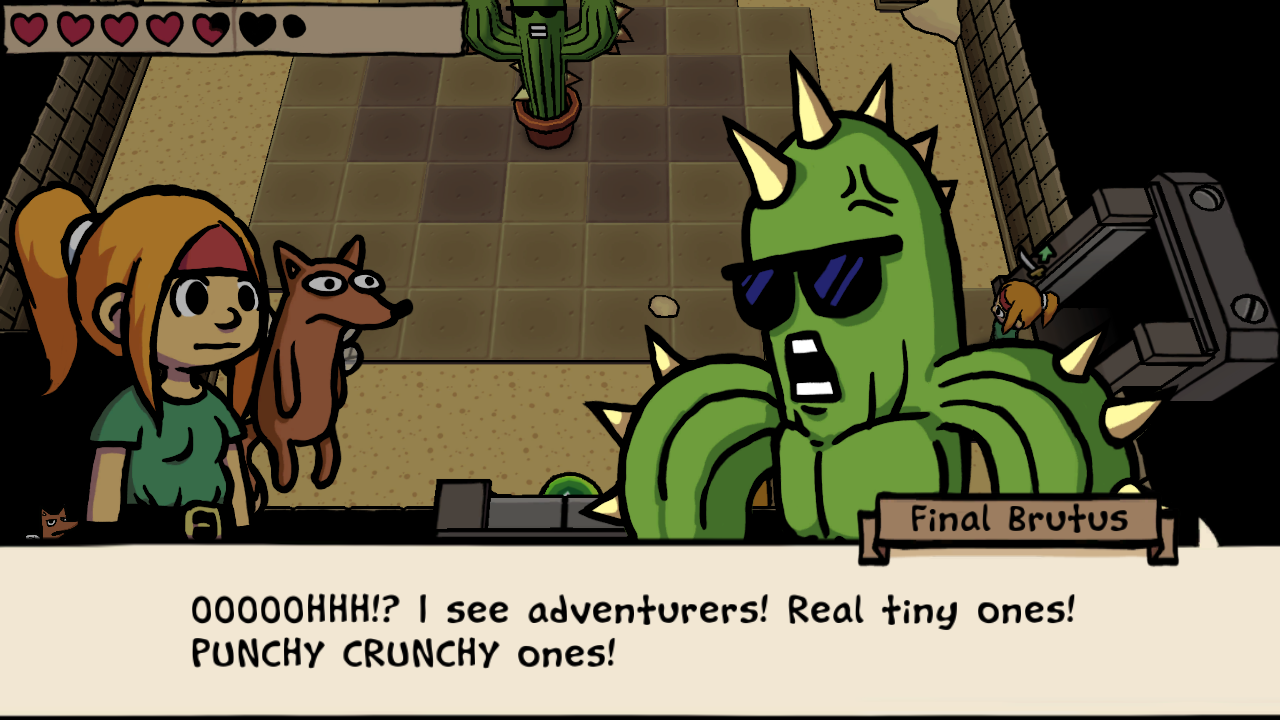 No instructions – At no point are you ever given any real instructions on how the game works or how any of the weapons or their upgrades work. Sure, everything has flavor text, with a bit of description in there, but for the most part, it was completely up to me to figure things out. Now don’t get me wrong, I like some mystery and challenge to my games, but when the game fails to tell me or give me some sort of hint that my weapon has a particular ability or that I can move things in a certain way, it’s not okay. It no longer feels mysterious or challenging; it instead feels like they are tricking me.

Bosses – You can go to any dungeon at any time, although doing them in the correct order makes it easier or so you would think, I felt like there was no real rhyme or reason to the difficulty of certain bosses. When your bosses are hard for the sake of keeping you from finishing the level and not because it feels fun and challenging, there’s a problem. I know that dungeon crawlers are supposed to be difficult, but it should also feel good when I come out the victor, yet most of the time, I just felt lucky and glad to be done with it. I never felt like knowing the pattern of the boss mattered and there was never any trick or combo I had to figure out. It was always just running away and dodging attacks until I could find a second to hit them once or twice and back to running away.

Story telling – Ittle Dew 2 Is about crashing into a mysterious island and having to build a new raft to get off. Although there is more story than that, that is all you know for 80% of the game. Once you reach the final two dungeons, suddenly the whole story is crammed in there. I don’t understand why they did this, the story isn’t huge or super in-depth, but it is there and it’s not bad. It just makes absolutely no sense to me why they didn’t spread this out through each dungeon; it would’ve allowed for the story to resonate a little better with the player and feel like we were working to a conclusion other than collecting raft pieces. Ittle Dew 2 was a fun little title that I enjoyed about 80% of the time. It controls well and unabashedly pulls from many classic games from the past. However, it fails to achieve the same level of greatness their inspirations achieved. Instead, you find bosses who feel impossible to beat and solutions to puzzles you will only find by accident or Google. The idea of me finishing off as many bosses in as many dungeons as I did and never once feeling accomplished or masterful was saddening. If you’re a fan of this genre in need of a quick fix, maybe check it out, if not, don’t waste your time.

Ittle Dew 2 was developed by Nicalis and published by Ludosity. It was released for the Xbox One on November 14, 2016, for $19.99. A copy was provided for review purposes. 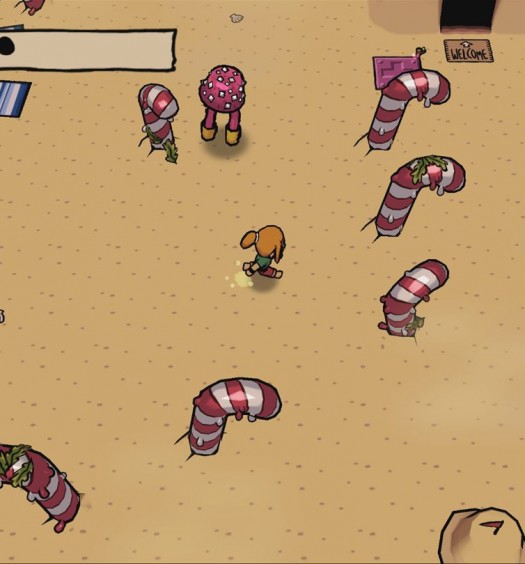