Girl Fight was only introduced a couple weeks ago but the upcoming fighting game with plenty of girls is soon around the corner. Kung Fu Factory and Microprose have revealed their first character entitled “Wrench”. While she may lack a shirt, she makes up for being a “tank” class which deals heavy amount of damage. She also graduated MIT at the age of 19, so it only makes sense a shadowy organization would kidnap her and make her fight other girls. Check out her arena after the jump. 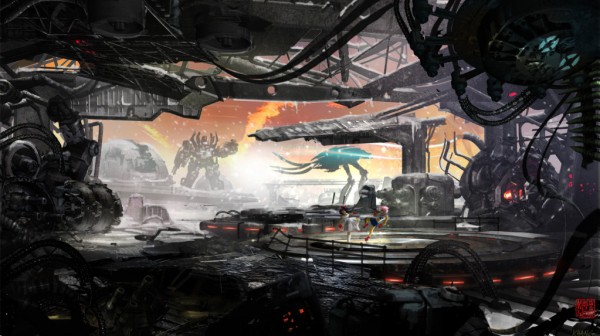 This is Wrench’s arena, “Mech Battle”, which every fighter in the game has a specific stage. Wrench’s involves a post-apocalyptic battleground with mechs outside while you’re in her garage, fighting another girl. While it would sound better to be on the mech background, the fighting sounds just as alright. The game will be making a showing at GDC this year and our own Editor-in-Chief will be representing us there. Girl Fight is looking towards a spring release, hopefully doesn’t start a tiff with Skullgirls.