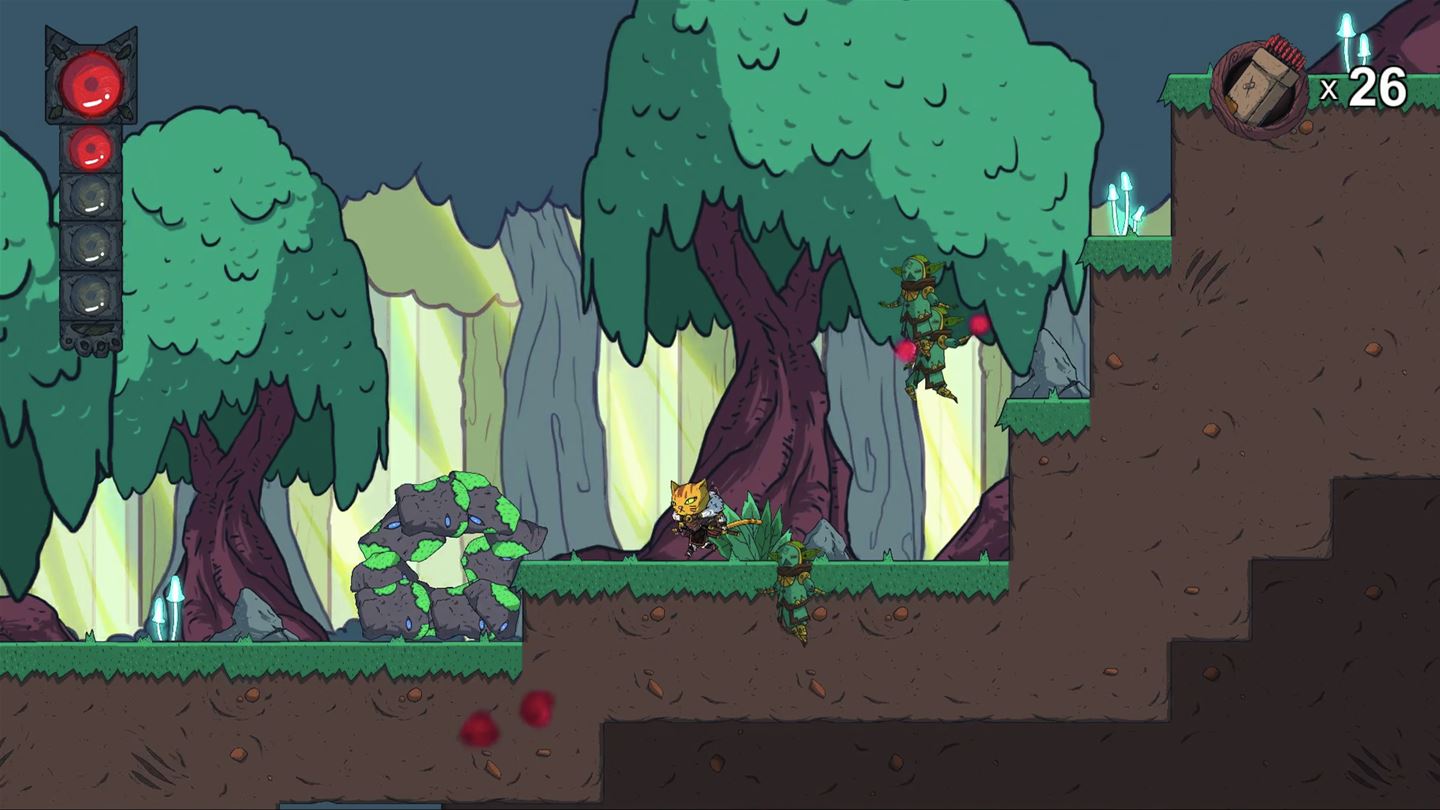 Ikki, the great cat huntress of Un’Amak is on a quest to save the kingdom from the evil Morodir. I traveled through forests, mountains and even volcanic depths in an attempt to restore order to the world. Hunter’s Legacy is a 2D Metroidvania platformer that allows plenty of freedom for exploration. There are numerous enemies to be slain, puzzles to be solved and upgrades and unlockables to be found, but after a cursory look world, I was left wondering what was next. 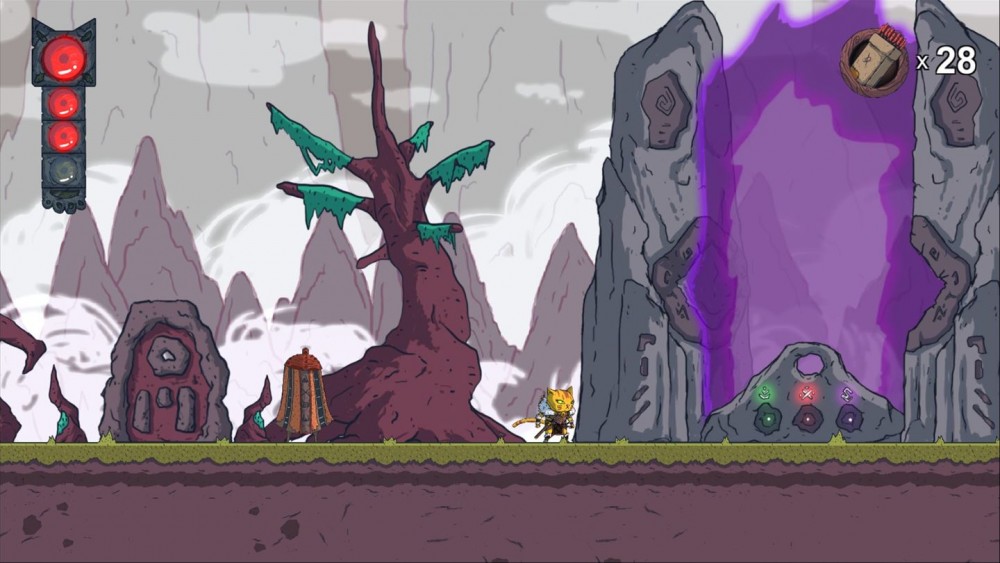 Flash art style – The flash art style of Hunter’s Legacy is nothing new for those with a history of flash games, but the style is still pleasing to look at for the duration of the game. Enemies and the environment vibrantly stand out and are worth noticing. The enemies also receive color palette swaps as the game goes which look fantastic, although it does allude to some of the larger problems of the game. Lienzo committed to the flash art style, and that commitment paid dividends as it ends up being the most enjoyable aspect of the game. 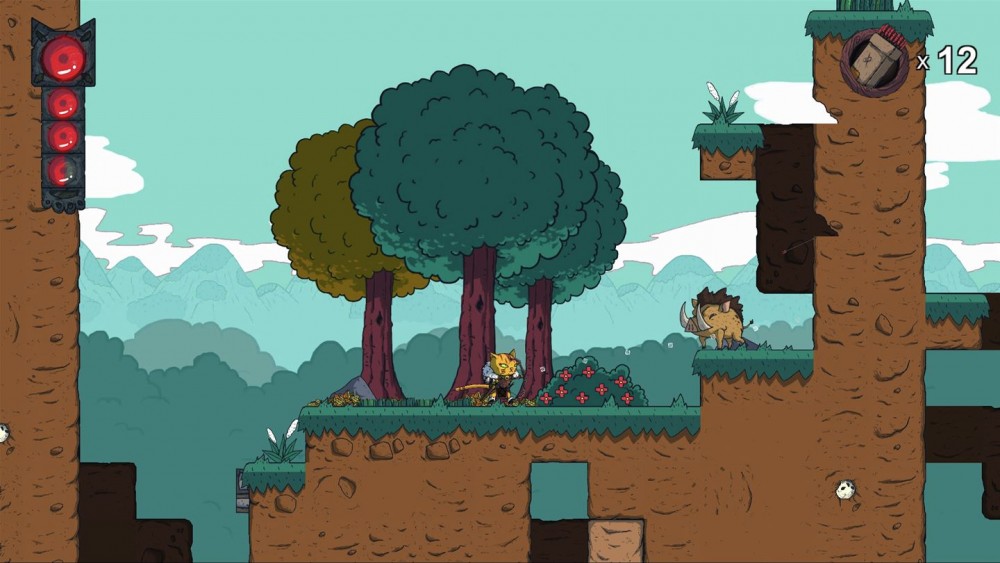 Lack of awareness in fights – Hunter’s Legacy has a fixed camera that reveals a wide area around and above the player. When I was roaming the world and looking for upgrades the camera was fine but entering combat is another story. There are a handful of regular enemy types that fly around and will often fly out of the range of the camera by a good margin, but their return is never all that dangerous as they are fairly weak and slow, however; when bosses exhibit the same behavior the consequences are devastating. This is because Hunter’s Legacy offers no way to determine where enemies flew off to or what angle they plan on returning at. Rather than have a little pop-up appear to track engaged enemies that are off screen Hunter’s Legacy offers no solutions and boss fights end up being unbearable to suffer through.

Combat – The combat of Hunter’s Legacy is lackluster and boring. The sword and bow both feel weak despite upgrades and the roll feels clunky to execute. I soon grew fatigued of fighting the most basic of enemies because I was continually fighting the same enemy types, albeit in greater number and with new colors. After a few hours, my primary tactic became running straight towards the objective and ignored the world around because I couldn’t stand to fight the same fight again and again. The boss fights do offer new combat experiences and are a departure from the fights with common enemies, but they still maintain all of the flaws inherent in the combat and weapon systems. In addition, bosses are cheap and showcase incredible spikes of difficulty when compared to traversing areas and engaging in regular combat and puzzles.

Been there, done that – The combat and puzzles blur into one long and tedious mission that takes far too long to complete. Enemy types are fully revealed within the first couple of hours so don’t expect any new combat surprises, outside of boss fights, which makes every area feel the same regardless of if it has a different backdrop. The key trait of Metroidvania games, returning to previous areas with newfound skills to unlock new areas and upgrades, was something I went out of my way to avoid unless I knew I absolutely needed an upgrade. 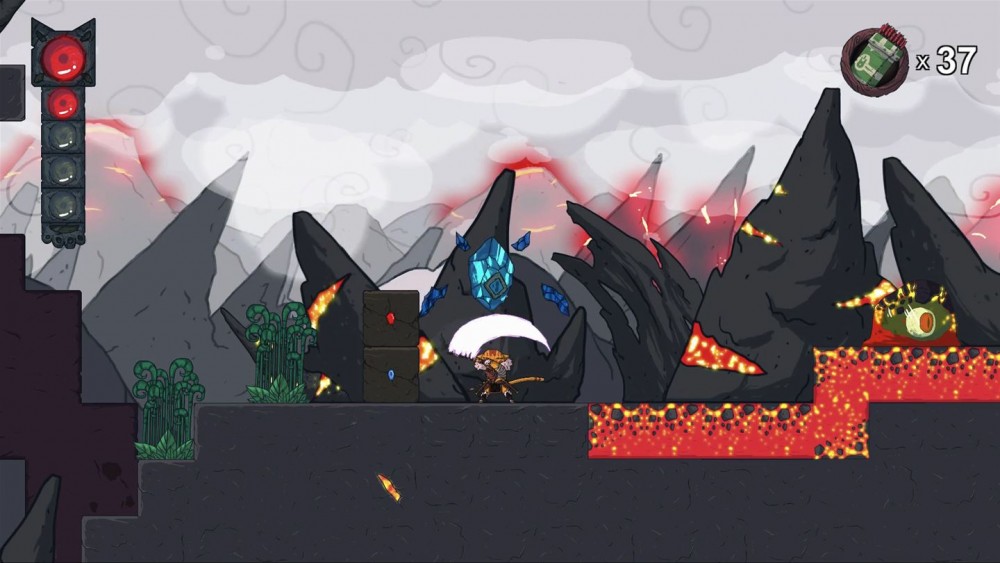 I certainly enjoyed looking at Hunter’s Legacy while I was playing, but I can’t really say that I enjoyed the act of playing it. The combat is slow and exhausting, and the lack of awareness afforded by the camera when fighting enemies that fly off screen is an enormous pain that leads to countless deaths. There’s plenty of game in Hunter’s Legacy, and a 100% will probably take close to 20 hours; I just can’t think of who would be interested in such an offer, especially with far better Metroidvania games on the market.

Hunter’s Legacy was developed and published by Lienzo on Xbox One. It released on January 19, 2017, for $11.99. A copy was provided for review purposes. 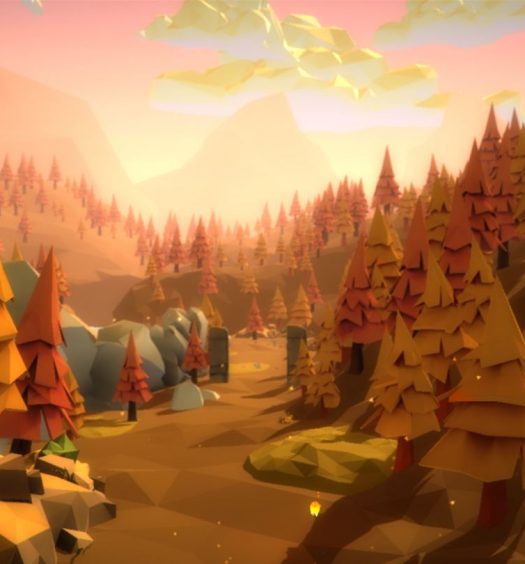