Some children seek to emulate their parents, while others choose to strike their own path in the world. Poor Jack, however, has a problem. If he mimics his parents, that means he’ll turn into a vampire intent on conquering the land of the living, as his father, known as Count Necrosis, has done. If he goes his own way, dear old dad will need to become “dead old dad”. Fortunately for the rest of us, Jack opts into the hero role for Happy Tuesday’s tower defense adventure, the aptly-named Hero Defense.

Like other such games, you must place defenses along a path that your enemies will always follow and prevent them from reaching their target. Unlike them, however, you’re limited to a maximum of five “towers”, which are actually the five members of your team, which you can around as needed. It’s up to you to place them where they’ll be most effective in order to keep the hordes of creeps at bay. Cool concept – At first, you’ll have only one character to work with; thus you’ll only have one “tower” to place on the battlefield. Fortunately, you start with Jack, the last in a long line of vampire hunters (sound familiar?) whose father has fallen in with the forces of evil. As you progress, new characters join the party and bring their respective abilities, such as a former preacher seeking to avenge his deceased wife and a charming brat raised by zombies with a thing for exploding pumpkins. The characters themselves are invincible and will target any enemy in their range. Defeated creeps produce the resources needed to call in new characters and level up their abilities. Players can pause the game with Left Trigger and evaluate their situation, even giving orders to your team to move to new locations.

Colorful guidance – Fans of the “Power Rangers” franchise will recall that our heroes wear the general color of their respective Ranger in their normal appearance. That trope works here too, as our characters are color-coded to match the enemies they are most effective at killing. For example, Jack is wearing red clothing, so he’ll be most adept at slaying the red-clad vampire hordes. Similarly, the information ticker at the top of the screen, which shows what types of enemy waves are approaching, has that same color. The waves also have a thin colored stripe that indicates which path through the level they are taking, helping you strategize more effectively. 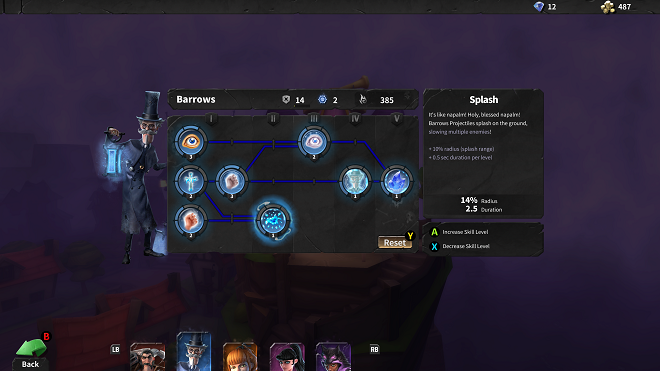 Character growth – Your five heroes can be customized in a number of ways. One such way is through the runes that are earned as you beat levels or are purchased using the in-game currency. As characters level up on the battlefield in a given level, they activate the next rune and gain its buffs. The Forge lets you choose which runes are equipped and the order in which they’re used. Similarly, the Academy grants access to each character’s skill tree, which lets players power up existing abilities and learn new ones. Both the Forge and Academy can also be leveled, making them more effective.

Learn from mistakes – I’ll admit it: I rage-quit a lot in these kinds of games. If a level doesn’t go exactly my way, I quit and start over. You can do that here, but you’re honestly better off to simply play out the level. Players earn a star for a completed level, with the only real change being how much XP and gold is earned in the battle. You’ll get the same star if your base is down to its last bit of health or hasn’t been touched. Even in defeat, your heroes will still earn XP, which will help them level up their abilities and perhaps make it a bit easier on the next go-round. Where are my glasses? – Much of the text in the game is very small, making it tough to read on a large TV. This is not the first game lately where I’ve encountered this problem, and it’s usually for the same reason. On a hunch, I took a peek at the Steam Store and found that Hero Defense was first released in 2016 on PC. While I’m glad to see developers are going into their back catalog to bring games to Xbox One, I would like it more if they took the time to enlarge the text to compensate for playing on the couch instead of at the computer desk.

My aching ears – The sound design in the game gets the job done, but that’s about it. The same musical tracks play continuously, even in the menus, which gets tedious after a relatively short time. However, I do have to call out the choice of sound effects for the werewolf creeps. If the sound of dogs yelping in pain gets to you, I’d recommend muting the sound whenever these creeps appear (again, you’ll see it in the info ticker). This is a tough one for me. I like tower defense, and Hero Defense is an unusual twist on the format. The story is entertaining, and with Halloween right around the corner, this is the perfect time of year for it. The gameplay is quick to learn, and it is both challenging and forgiving; however $30 is a high ask for this type of game. If you like the genre and catch it on sale, grab it, and you’ll have a good time. At worst, it will make your own family reunions seem just that little bit less awkward.

Hero Defense was developed by Happy Tuesday and published by Headup Games. It was released on August 15, 2018, for $29.99. The author was provided a review copy of the game.