Guardians of the Galaxy Episode 4: Who Needs You review: Don’t Stop Me Now

Guardians of the Galaxy Episode 4: Who Needs You review: Don’t Stop Me Now

So, now that the big narrative-changing choice has been made, how do we prevent that decision from actually taking effect until the finale? By shoving the Guardians into a secluded cave, of course! No matter how you ended Episode 3, your actions will literally be world-shattering, causing the Kree to flee and knocking the Guardians deep into the bowels of the mysterious planet. It’s weird to have something so separated from the main plot as the penultimate chapter, especially in a series where the main villain hasn’t gotten a huge amount of screen time, but at least this episode is very well done. I’d go so far as to say this is the best episode of Guardians of the Galaxy yet. 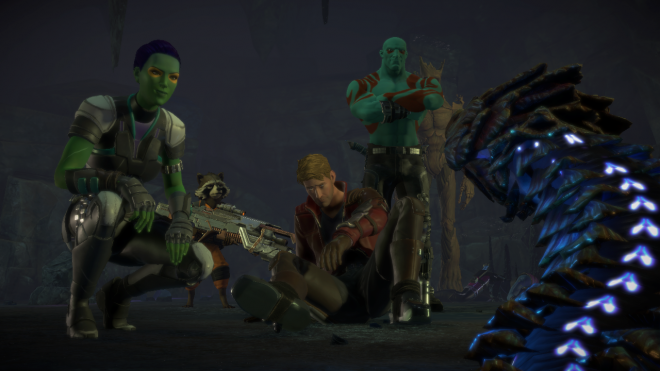 Who Needs You is all about the Guardians trying to escape a winding cave system full of unusual dangers at every twist and turn. Expectedly, in forcing them to be together the rift between them is only getting larger. They’re fighting even more than usual, especially Gamora and Rocket, and the wounds you made in your decision with the Infinity Forge are still festering in everyone. The writing here is at its finest, creating an incredible sense of tension while still leaving room for jokes. Choices feel like they have a whole lot more weight; with everyone set on hating each other, every little thing you do will be scrutinized by someone. In this episode more than ever, it feels like your choices actually do matter – there are actually different endings based on the decisions you make. Mix those in with the big choice from Episode 3, and we’re looking at a lot of potential variability leading into the finale.

The flashbacks this episode were also extremely well done. We get another scene with Peter and his Mother, as well as a look at Drax’s life on his home planet with his daughter. They’re both emotional gut punches, and Drax’s, in particular, does a great job at adding depth to the character. For once the flashbacks don’t feel as integral to the present-day plot, instead of acting as a thematic compliment. The only real downside of the episode was its long traditional gameplay section, where Star-Lord is flying around with his rocket boots looking for ship engines. It’s long, dull, and overly straightforward – while it’s spiced up by some radio chatter, it really could have been improved with puzzles or some other gameplay twist. Other than that, I’d say this is the first episode in the series that not only is legitimately great but actually has me really excited to see what happens next.

Guardians of the Galaxy Episode 4: Who Needs You was developed and published on Xbox One by Telltale Games. It was released October 10, 2017, for $4.99. A copy was provided for review purposes.