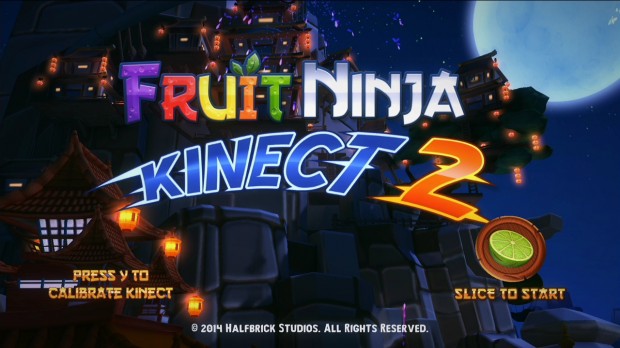 The gameplay is very simple. Slice, dice, chop and cut up fruit to gain high scores. Along the way, different obstacles will attempt to impede your path to success. With the power of Kinect, players will feel like they are in the moment on screen and look good in the process. But can such a simple concept carry a second game in this franchise? Kinect accuracy — Immediately upon starting the game and for the duration of my playtime, the Kinect felt incredibly accurate without requiring me to try too hard. It’s nice to see how the technology has improved and to be able to interact more seamlessly without struggling. The bow motion to pause the game was the one and only gesture that at first felt incredibly awkward. After paying more attention to the load screen tool tip, however, even that became second nature. Nothing like chopping fruit with deadly accuracy.

Variety of activities — Fruit Ninja Kinect 2 features many game modes that change the core goal of slicing up fruit. In the Festival Mode, one challenge has the player dodging a shuriken-firing bullseye for a few seconds while dicing fruit. Another mode has the player dodging persisting spotlights while, you guessed it, cutting fruit. For those that may not enjoy the extra festivities, Zen Mode in Quickplay is there to allow you to blissfully chop fruit in style. There are seven modes available to play in single player as well as multiplayer. Unfortunately, I did not have the opportunity to play multiplayer with friends, but doing so may extend the life of this title.

Objectives keep things fresh — While playing, you can level up by completing objectives. Game modes within Festival require the player to level up, but doing so is thankfully a quick process. For the rest of the time, completing objectives will help you earn level ups to unlock cool effects that can change different backgrounds, the color on slice animations and more. Each game type has three different objectives and any time an objective is completed, it’s replaced by a new one to keep the action going. To give an example, for Mari’s Strawberry Stealth, three sample objectives are “slice 10 coconuts in one game,” “slice three purple bombs in one game and score over 100 points” and “perform three combos with two spotlights or more on screen in one game.” It’s a great idea that keeps the player engaged throughout each game session The game feels a little hollow — For a brief period of time, players play to unlock the various modes in Festival. After that, there really isn’t much left to do other than unlock optional stuff and cut more fruit. At least there is an intrinsic sense of fulfillment that comes from slicing fruit, but the game’s provided motivation is otherwise lacking. If chopping up fruit in style is your idea of fun, Fruit Ninja Kinect 2 will deliver in full. The core gameplay is pleasant and relaxing and will bring hours of enjoyment to chopping enthusiasts. It’s unfortunate that I didn’t have the opportunity to play with another person, because the multiplayer looks promising and has an option to cooperate or compete against people in a local environment. The incentives provided by Fruit Ninja Kinect 2 are a bit lacking, so players will have to bring with them their own desire to have fun chopping fruit. Still, a great Kinect experience is ready to be had here.

Achievement Notes: While I did not have time to fully obtain all Achievements, most of the ones I did have been very easy to unlock. Some Achievements require commitments such as reaching level 30, which means completing 90 objectives across all game types. A few words of warning: there are at least four Achievements that require multiple people, and there is no online play available to help you unlock them.