From Mario to Sonic, one of the most prevalent genres in gaming has always been platforming. It hasn’t been as important as it used to be but games like Rayman Origins prove people still care about platforming. On the XBLA side, the platforming genre has seen many leaps forward with hard difficulty, precise platforming or a creepy atmosphere. We’re not even done with the genre either with upcoming games like Pid and Fez. Today we thought we’d take a look at five really great platformers and discuss why they’re so good on XBLA. Limbo began the Summer of Arcade in 2010 and made one of the biggest splashes back then. You play a boy looking for your sister in this desolate dark world filled with spiders, villagers that want you dead and traps that will kill you in a matter of seconds. Less about fast-action and more about methodical thinking, it feels like those classic rotoscoped animated platformers but has better works than those games (we’re looking at you War of the Worlds). There’s a lot of people who love Braid because it did a lot of things that we usually don’t see. It was very artistic and had a plot about saving the princess that was much deeper with books to evolve the story in your mind. Our hero Tim has a mechanic that allows him to wind back time at any given moment. You’ll need it to go through the intricate puzzles to save the princess but does she really need saving? All you have is one button: Splode. That’s all you have to do and it was such a great mechanic, they gave it to his lady friend too! An experiment gone wrong, you’re ‘Splosion Man, setting off to escape a laboratory and explode everything in your path. Simple platforming with loads of laughter along the way as the titular character. Ms. Splosion Man carries that ethos over even further with more environments and crazier bosses. Not to mention everybody loves donuts. 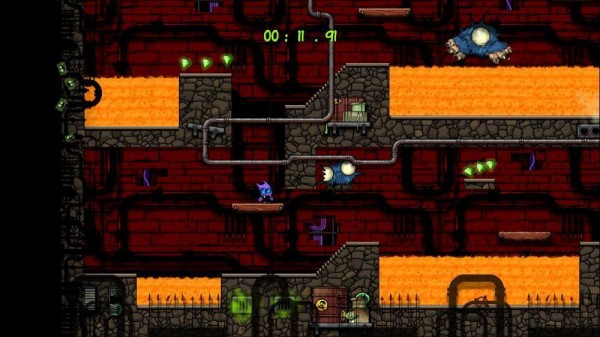 This is on this list purely to get more people to actually play this game since it’s one of the best platformers to come out of recent memory. You play a vampire named Shuggy who’s inherited this house filled with challenge rooms. Some of the challenges veer from collecting all the gems as quick as you can to cloning yourself or rotating the room to get to the end. It’s an incredibly overshadowed game that would be great on your digital shelf. Going out on a limb by calling Super Meat Boy the greatest platformer of this generation (although Rayman Origins just came out) but it’s hard to think of what else could take its place. Combining pitch-precise platforming with 300 levels, each getting harder than the next. Some people don’t like the gameplay and think of it as masochistic but maybe that’s due to their lack of skill and patience. You need to focus when playing the game and only then will you beat the game and make Dr. Fetus give you back Bandage Girl.

Let us know what your favourite platformers on XBLA are and what platformers you’re looking forward to this year in the comments below!