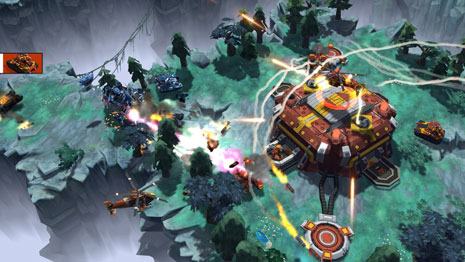 Popular browser-based, real-time strategy game AirMech is coming to Xbox 360 this summer in the form of AirMech Arena. Indie developers Carbon Games teamed up with publishers Ubisoft to bring the free-to-play game to console gamers. “As an indie developer, AirMech has been our passion for the past several years, and we are thrilled to partner with Ubisoft to bring the game to console,” said James Green of Carbon Games. “AirMech Arena was created from the ground up to be the ultimate RTS experience with a gamepad. The fast-paced action and depth of strategy brings console gamers a new experience we are confident they will enjoy.”

The game will include single-player, along with both multiplayer cooperative and multiplayer competitive gameplay for teams of two to three players, with teamwork being a particular focus. Carbon Games have promised that AirMech Arena will continue to receive regular updates post launch with content drops that include new AirMechs, units, maps and events.