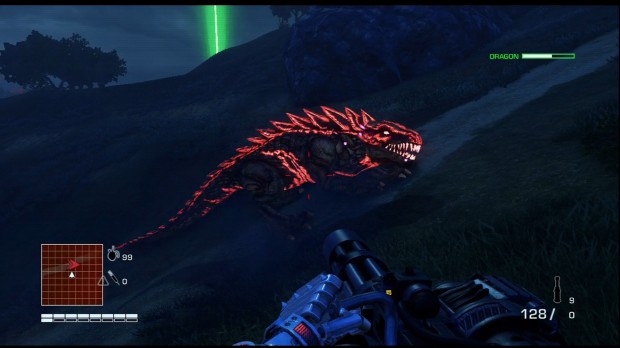 Characters – All the main characters in this game will make you laugh and chuckle the entire way through. The protagonist is a running joke of every adrenaline fueled hero from action movies of old. Jokes fly rampantly between characters and there are dozens of references that movie buffs will love. The villains are equally likable, shouting out threats while constantly seeing their armies die before you and accidentally revealing plans because they are so certain you will not live to see another day. To top it all off, the various A.I that you encounter in the game are always ruining your enemies plans and spouting lines dripping with sarcasm that will leave the player laughing.

The music and sounds – The music they chose for Far Cry 3: Blood Dragon fits the game so perfectly, we can not imagine anything else ever being in it. As battles heat up and things start getting intense, this great 80’s style soundtrack kicks up and really gets things going, making the whole experience better. The sound effects are right up there, fitting perfectly in with the vibe of the game. Characters have an synthetic sound to them, while weapons have that futuristic sci-fi feel as imagined by people 30 years ago.

Everything is a joke! – What truly makes this game fun, is the humor. It never stops and players will always find a reason to chuckle or laugh as they play. Even the tutorial is a joke, making fun of older, clunky tutorials from games made years ago. Load screens are filled with “helpful” messages that end up being less about help and more about making you laugh. It is clear the people making this game had a great time doing so, as it reflects in their work. Players will be hard pressed to find something in this game that isn’t designed to get a chuckle out of you. 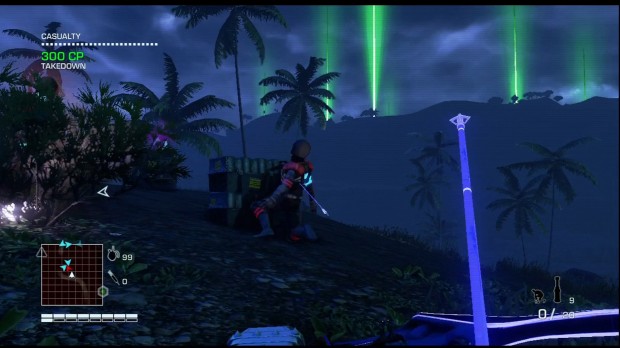 Things can get repetitive – Although everything surrounding the combat is hilarious, the core experience of shooting enemies and clearing out rooms can get tiresome. New weapons and abilities will pop up over time, but things rarely get past the enter a room and kill everything phase. Far Cry 3: Blood Dragon is not a terribly long game, so this repetition is not a detrimental to the overall experience, however it can wear on players, especially returning Far Cry 3 veterans who have been through it before.

Things are dark, all the time – Far Cry 3: Blood Dragon is a dark game, plain and simple. Although this was probably done to set the mood and help accent the glowing “Tron” like lighting that covers many objects in the game, it can wear on you over time. There will be moments when players simply want daylight so they can actually see clearly what is going on around them. The issue of darkness is even more annoying in the early stages when a red hue is filtered over everything. Thankfully that redness will vanish as players liberate outposts, but it is a nuisance all the same.

All things said, Far Cry 3: Blood Dragon is a fun game to play. It is a great example of how to use an existing game and spin it off into something fresh and fun while still retaining the core of the original. Whether young or old, there are jokes a plenty in this game to keep players having a good time while exploring this insane world. Although it is not a perfect experience, the story, music and characters will compel you to finish, just so you can see the ridiculous outcome of this parody of a game. New to the franchise or not, everyone should check this one out, you simply can’t go wrong for 1200 MSP.