In an alternate history two World War I veterans, Frank Woodruff and Vladimir Farnsworth, return from action wounded and disabled. Frank creates a new apparatus that allows injured soldiers to walk again and becomes the toast of the town. Vlad develops the television in an effort to bring the world to him from the confines of his own bedroom. In doing so, Vlad drives himself mad modifying the televisions into evil Tubes. These creatures collectively formed his Monovision Empire and become the new threat to American society. Again, the United States turns to trench warfare; however thanks to Frank these trenches can press forward and bring the fight to the enemy. 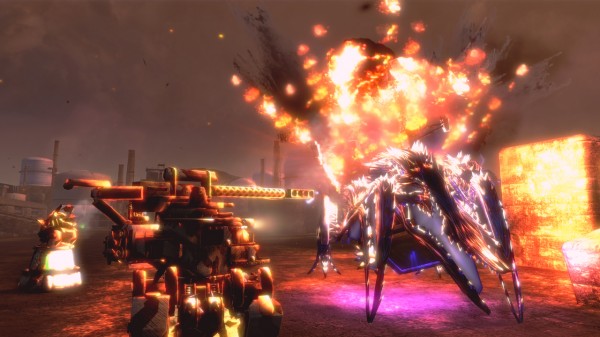 Players take on the role of mobile trenches that can be highly customized, allowing players to pick a play style that suits them. Three different bases can be chosen from (bipedal, tripedal or quadpedal) offering different levels of speed and stability; unit is fastest with two legs, but sturdiest with four. Players can also modify loadouts of their trenches, selecting both right and left weapons as well as what emplacements they want to bring to the battlefield. As player progress throughout the game new weapons will be unlocked through completing challenges and picking up weapon drop crates. These crates will drop a random weapon from a specific tier. If a player has a hard time getting a specific weapon they can always save up and purchase it in the store through money earned in game. Even the pilots can be customized. Players can select different hats, which will in turn allow the pilots to do different salutes when on board their ships.

Once players enter the battlefield they will engage in a hybrid third person, tower defense game. Waves of monovisions will attack the player’s base as the player uses their mobile trench and emplacements to hold off the attack. Once placed, a emplacement can be replaced by an upgraded version that does significantly more damage for additional funds. These funds are known as tubes, collected by destroying monovisions. Any time a mobile trench walks near a cluster of fallen tubes, the trench will absorb them allowing for additional emplacements. Should a player be able to drop a tube directly on an enemy that enemy will feel a massive amount of pain and likely die. The game features various enemy types. Some enemies will rush the base, whereas others will focus on the player or their emplacements. Thus players will need to prioritize which to attack first during larger waves. If a player’s own mobile trench is destroyed, they will soon respawn; however, if the base is destroyed the mission is over.

Trenched plays fantastic as a single player experience but really shines when other mobile trenches team up to combat the monovisions. The game is instantly scalable from one to four players. Instead of throwing more and more units onto the map, the game recognizes that additional players are playing and buffs the health of the enemy. At the same time, larger matches will typically sport larger amounts of enemies and more emplacements.

The Double Fine team has configured the game to encourage cooperation. All tubes collected will count for every player, while each player maintains their own tube count. Thus if a player prefers to sprint around collecting tubes the whole game, instead of griefing and stealing all the drops that player actually becomes a huge asset to the team. The same goes for any special loot drops. The team has gone so far as to create an online regiment system that allows players to unlock new items when their friends play the game. 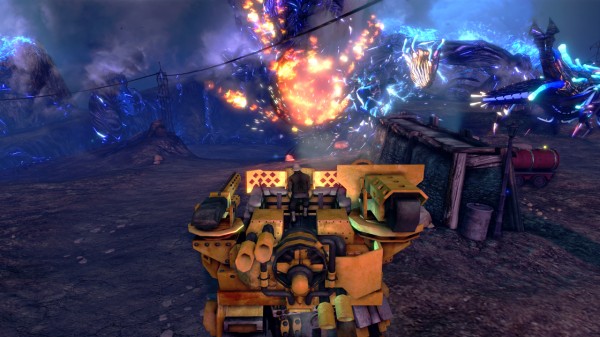 Periodically, players will reach a boss mission. On these missions instead of protecting a base, the trenches will mobilize and push forward attacking and enemy monovision encampment. One such boss battle we saw focused around a three stage battle with a massive monovist creature that encompassed most of the screen. In order to defeat it, players had to avoid its attacks which became progressively more deadly over time as it transitioned from form to form. Periodically smaller enemies would rush and drop loot. These boss fights serve as a fantastic way to flip the entire tower defense genre upside down.

All in all Trenched provides a groundbreaking experience by completely uprooting the trenches themselves. While active tower defense games have been done in the past, it’s rare that a game succeeds on so many levels at the same time. Trenched provides a comical, exciting experience in the usual Double Fine fashion. Look for it to release June 22 for 1200 Microsoft Points.