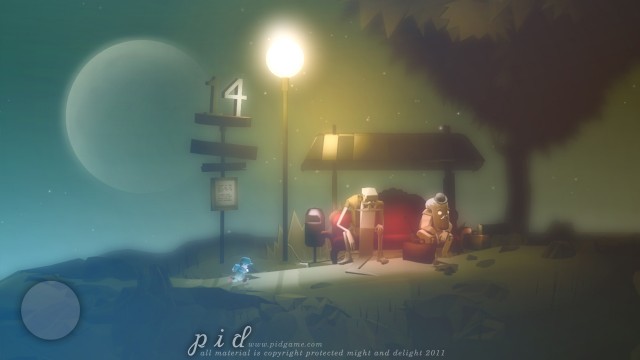 The preview build we saw at E3 started from the game’s inception, familiarizing players with the controls and then acquiring the  gravity manipulating light… shaft… We’re going to call it the light beam. The light beam is the main traversal mechanic in Pid (other than walking and jumping). Shooting a ball of light at most surfaces will result in a ray of light cast perpendicular to the surface. While it lasts, the beam pushes anything (enemies, levers, your character etc.) to the end of it. When playing solo, players can have two active at a time.  In co-op however, each person only gets one at a time, which is the biggest difference between the two modes. The beam can be cancelled at any time, such as when you’re floating into some deadly spikes.

The first couple of puzzles were pretty simple “get here by floating over gaps and up walls” affairs but I remember my first challenge vividly. I had to float up, then make my way through a series of boxes in the air to get to a nearby ledge. Each box was coated in giant, red, unwelcoming spikes. I must have died in that puzzle 10 times trying to rush through it; jumping too early, missing beam shots, or goofing up the timing. From there on out Pid proved to be a game which demanded patience and attention.

These early challenges also proved how much finesse Pid‘s platforming requires. Because the main mechanic is based on aerial-traversal and physics manipulation (rather than just jumping), the challenges are very spatial in nature. Obeying the rhythm of an enemy who dives at you, timing jumps from light beam to light beam, dodging spikes, these are simple and in most games very easy but Pid makes them difficult obstacles, and it feels good (even when you die). 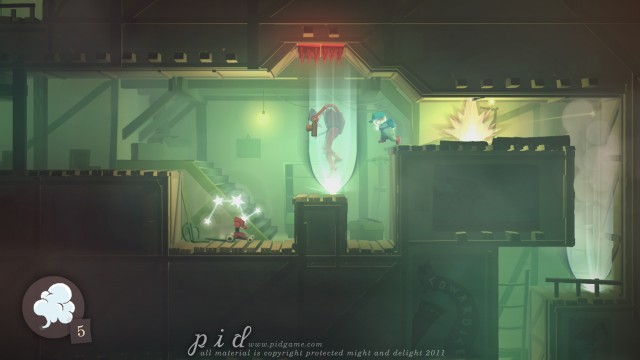 The demo skipped ahead to a later part in the game which seemed to take place outside. Blocky red robots roughly twice my size shooting rockets that tailed the young schoolboy hid under platforms. Colliding with any of these would end his life. Luckily death is forgiving in Pid, which implements a now-familiar checkpoint system.

After dodging all manner of jerks with projectiles, I came to a boss fight which consisted of a big(ger) red robot on a platform. In Pid, you can collect bombs and other items to throw at enemies but that didn’t work here. Instead, as he fired ominous red rockets at me, I had to trick them into flying right back into the robot’s face. Pid had taught me to be patient; to watch the rhythm and outsmart the robot to achieve victory and move onward into the unknown.

Shortly after thwarting that boss, I picked up the slingshot. The slingshot is apparently one of the core items that stays with you throughout the game, allowing you to shoot light beams far beyond yourself in any direction. Unfortunately, just after acquiring this magnificent tool, my time with the demo ended. I wanted more. 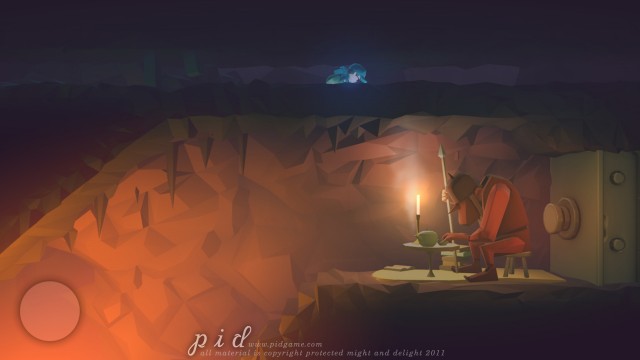 Pid is a platform puzzler — a genre littered with unique games — and yet it manages to find a solid identity for itself. With its beautiful pastel palette, awe-inspiring environments, and strange enemies, the game manages to grab your attention and coaxes you into delving further. Pid offers challenging platforming gameplay, puzzles varying from fast and reflexive to slow and intellectual, all wrapped around its unique light-beam mechanic. Watch for this truly intriguing adventure releasing sometime this August.