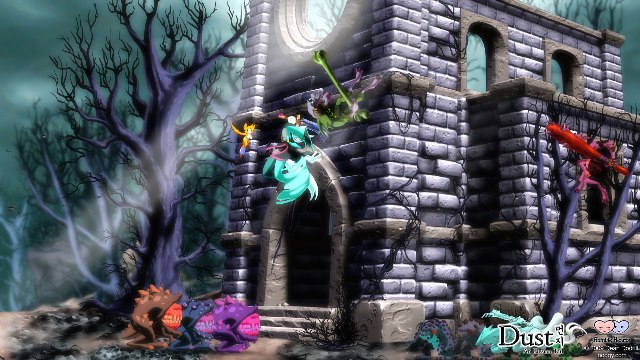 I almost missed it. I almost wearily shambled right out of the Boston Convention Center this past Easter Sunday without playing what just might have been the most gorgeous XBLA title on the show floor. Luckily, Kinect Fans Managing Editor Nick DePetris issued a last minute reminder that readers had been flooding the site with requests for coverage of developer Humble Hearts’ Dust: An Elysian Tail. So off the two of us went to Microsoft’s blessedly carpeted booth one final time before departing PAX East 2012.

Sandwiched between the 360s running four-player previews of Minecraft and Tequila’s Deadlight demo was the side-scrolling action title from the inspired mind of one Dean Dodrill. That a sole man could craft something so wonderfully creative is extraordinary. It’s almost impossible to believe that Dodrill is the only member of Humble Hearts given how excellent his work-in-progress is at this stage of development. He’s been working on it for several years (see its victory at Microsoft’s 2009 Dream.Build.Play Challenge for evidence of its lengthy development cycle), but there are still some months to go before its vague 2012 release date arrives.

The titular main character is an adorable-but-deadly anthropomorphic hero questing through the alluring world of Falana with a charming fairy sidekick in tow. Falana features dark and dreary caves with medieval castles looming in the background. Players will venture into at least one cavern that is darker still, but they’ll also emerge from the “it was a dark and stormy night” motif and find themselves in a gleaming, tranquil forest with cute woodland animals prancing about at some point in the adventure. I’m hardly the first to compare the aesthetics to the masterfully animated Disney films of old, and I am unlikely to be the last. 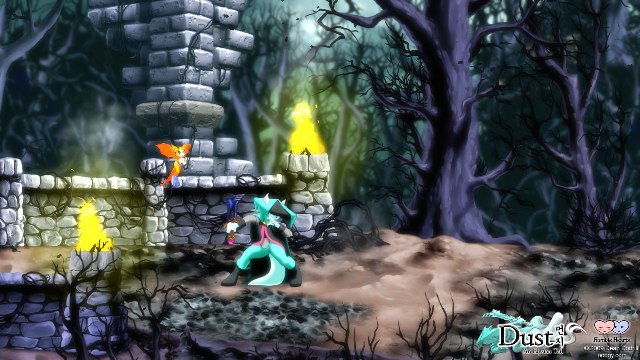 Disney is a brand that immediately invokes warm and fuzzy Zip-a-Dee-Doo-Dah-esque memories of innocent — or childish, if you prefer — settings. Think harder, though, and you may also recall the grimmer portions of classics like Snow White and the Seven Dwarves and The Sword in the Stone. Without getting too carried away and stating that Dust is something on par with those seminal works of animation, I’ll just say that Falana bears an impressive resemblance. I’d love to see more of the title and discover what other visual wonders lay in wait, but that will have to wait for another day.

The enemies found in the PAX East demo are mostly delightfully freakish little monstrosities that pose little threat on their own, but can be troublesome in large groups. Dust has basic sword swipe attacks for dealing with one or two of the baddies or inflicting some quick damage on groups or bosses, but the power lies in his ability to toss little balls of energy out and convert them into a whirlwind of devastation by twirling his trusty blade, Ahrah. That’s where the real fun is at.

Dust can either stand still during these times and let these chaotic winds whip enemies into submission or jump right into them and fly about the screen with an awesome special attack. Either method allows massive damage to be done to a foe and also presents an opportunity to easily wrack up huge combos. Despite playing the game for the first time in Boston, I was seeing the combo meter spiral up into the 40s and 50s without straining to make it happen. 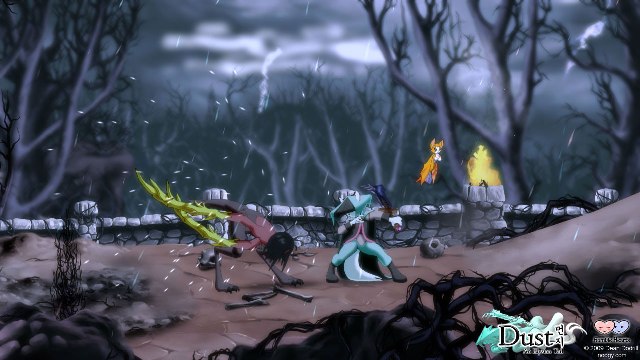 Gluttons for punishment shouldn’t get too worried about the lack of challenge, though; the level played appeared to be early in the game. On top of that, many convention demos have their difficulties dialed down for obvious reasons, and that may have been the case at PAX. Regardless, the game’s website promises “a fighting system that rewards skilled gamers.”

Dust’s other moves included a slick dodge and the ability to hold the attack button down to parry. The former is extremely useful when facing a number of monsters at once, and the latter had to be leaned on to overcome a large boss made of stone that carried an otherwise impenetrable shield.

Elysian Tail is gorgeous, fun and smooth as butter. At least, it was after the game was restarted for me after it initially suffered from some framerate choppiness. It was said to be a glitch that will be ironed out in time for launch but worth mentioning all the same. I’d very much like to see how much deeper combat gets later in the game to properly judge whether or not the battle system can hold up over the length of the title, but it definitely felt great during the demo. With the action-platformer supposedly releasing later this year, the wait shouldn’t be too much longer.