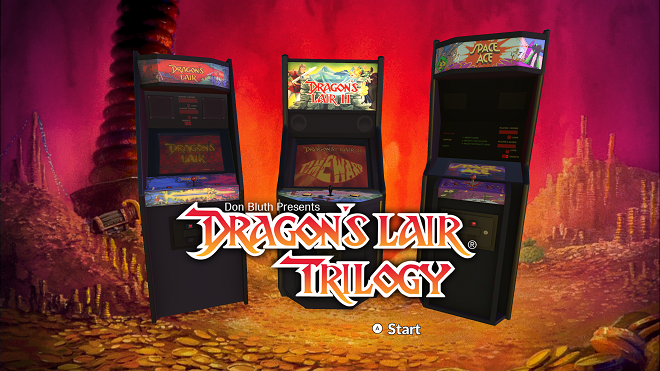 In the early ’80s, arcade gamers were happy to have moved past the era where games were black and white, or used tinted coverings on the cabinet to simulate color. They were happy that the characters had some personality, like Ms. Pac-Man and Mappy. So you can imagine their surprise when a fully-animated arcade game, Dragon’s Lair, arrived at their local Putt-Putt or Aladdin’s Castle. They were stunned by the thought of playing a game that looked like a Disney-style animated film. They were stunned by its hero, Dirk the Daring, who was as entertaining in death as he was when he saved the fair Princess Daphne from the evil Singe. They were also, no doubt, stunned by the game’s steeper cost of 50 cents per play at most venues. The laser-disc game had arrived in America, and while the format’s time was short, Dragon’s Lair, one of three titles represented in Digital Leisure’s Dragon’s Lair Trilogy, is still fondly remembered in gaming culture.

Players choose from one of three digital representations of the arcade cabinets for the included games: the original Dragon’s Lair, its sequel Time Warp, and the sci-fi themed Space Ace. These games rely on what we now know as quick-time events, where players must move the joypad or press the action button at the right time to keep the sequence going. Make the proper selection at the right time, and the scene continues. Miss, and you’ll see the result of your mistake. Throughout, players will enjoy hand-drawn cinema-quality animation from Don Bluth, a former Disney animator whose own studios produced films such as “The Secret of NIMH” and “An American Tail”.

Memories –These games devoured an un-ending number of tokens on my weekends in the summer, so playing them again is as much nostalgia as it is entertainment. Aside from being a frame-for-frame copy of the original, each game has a number of bonus extras, such as the arcade machine’s attract sequence and interviews with the animators and developers. Like the original games, Dragon’s Lair features a randomized sequence of scenes, while Space Ace and Time Warp are played in a linear fashion. Also like the original, some sequences can run in standard or mirrored versions, increasing the challenge and testing the player’s dexterity and memory. As a side-note, Dragon’s Lair requires the most memorization. Space Ace and Time Warp have more cues in the animation to direct the player to the proper reaction, perhaps indicating how the designs on the format evolved from one release to the next.

Options – Each game features a range of options to level the playing field or increase the challenge. One that players will not remember (because it wasn’t in the original games) is a translucent image of the controls near the bottom center of the screen. The controls will flash at the appropriate point, to tell players what move is needed. Of course, if you prefer to relive the sense of discovery those of us at the arcade had, you can turn the guide off and try to figure things out using the animation itself. Other options include the ability to change the number of available lives and to turn on and off the telltale bleep that indicates a correct move. If memorizing moves isn’t your thing, feel free to sit back and watch the animation play through uninterrupted.

Classic animation – Don Bluth was an animator with the Disney studios during the 1970s who became disillusioned with how that studio was operating, so he struck out on his own, taking a number of fellow animators with him. Dragon’s Lair was his first project after the meager box-office performance of “The Secret of NIMH” forced his studio into bankruptcy, and it showcases the traditional hand-drawn animation style that has since been lost in the rush to computer-generated animated features. Bluth’s team gave Dirk and the other characters in the games distinctive personalities that needed little spoken dialogue to express. (Time Warp and Space Ace are much more talkative than Dragon’s Lair itself, however.) Therefore, I would encourage watching the animation through on its own to simply savor it without having to worry about recalling the movement sequences, although parents of very young gamers may want to pre-screen it.

No remastering – These games were intended for low-resolution arcade-machine TV monitors from the 1980s, so plopping them onto a modern 50-plus-inch 4K display reveals some problems. The animation still holds up, but the picture is quite grainy. Disney has taken the time to restore many of its traditional features for the benefit of newer technologies, and I do wish Digital Leisure, which has owned this trilogy of games for years now, would commission just such a restoration for the animation used here. For what it’s worth, the Wikipedia article for the company suggests they actually were restored to HD levels about 10 years ago, but (1) it’s Wikipedia and (2) it’s still grainy.

Some not-so-good options – Difficulty and number of available lives are good options I expect for this type of title. One that had promise was the arcade-style display option, which (in theory) would have decreased the resolution and aspect ratio to match the original, plus apply a replica of the arcade cabinet bezel. While the bezel is there, the resolution of the game hasn’t changed, so it actually cuts off a large percentage of the screen area. It also splits the movement guide, placing the joystick on the left and the action button on the right … along with their corresponding indicators. Hopefully players that use this will have good peripheral vision.

No new ground covered – Digital Leisure has re-released these titles, either individually or in this trilogy bundle, for the past 20 years. One of the first ports was to the then-new DVD format in the late 1990s, with gamers using the navigational joypad on their device’s remote control. They even partnered with Microsoft to release an Xbox 360 version of Dragon’s Lair that lets players use Kinect to control Dirk, and that version, sans Kinect functionality, has been back-compatible on Xbox One since October 2016. In other words, despite the relative rarity of Space Ace and Time Warp, there really isn’t anything novel here that would prompt a re-purchase, outside of it being native to Xbox One.

I do vaguely remember my first experiences with Dragon’s Lair. I didn’t do well at it because I didn’t know the moves, but that never stopped me from playing it, even if I did find Dirk’s death scenes a bit too macabre (hey, I was a kid; don’t judge). As an adult, I applaud Digital Leisure for keeping the laser-disc arcade era alive. The main attraction here, without question, is Dragon’s Lair itself, but Space Ace and Time Warp make the trilogy a well-rounded ensemble. If you don’t already have all of these games in your collection, Dragon’s Lair Trilogy is a great way to fill that void, and the cost of admission is quite reasonable. So, as the narrator says, “Lead on, adventurer … your quest awaits!”, and it awaits you in the Xbox Store today.

Dragon’s Lair Trilogy was developed and published by Digital Leisure, Inc. It was released on May 17, 2019 for $19.99. The author was provided a copy of the game for the purpose of this review.