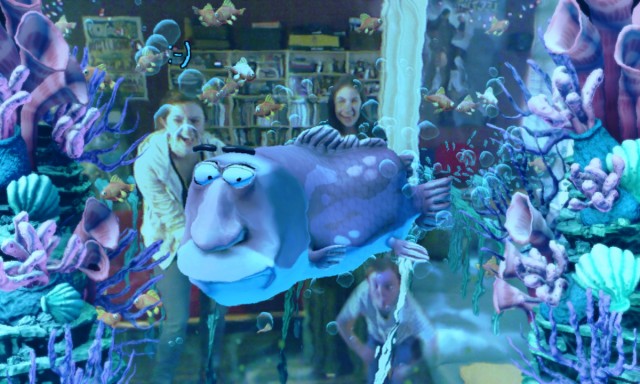 Development studio Double Fine will unveil a sequel to its February Kinect title Happy Action Theater on Friday, if a tweet from Giantbomb co-founder Ryan Davis Monday afternoon is to be believed. Davis had this to say:

Furthermore, a report over at SideQuesting reports the unveiling will involve a livestream of the game. SideQuesting also writes that the game will be playable at PAX Prime, which runs Aug. 31 – Sept. 2 in Seattle, Wash. According to the report, a Double Fine forum user noticed the name “Happy Action TV” used in an email sent out to Double Fine Adventure backers, though they note “Double Fine wouldn’t confirm the name” to them.

If all this proves true, the new title will be a sequel to an all-ages augmented reality title that used the Kinect sensor attachment to place the player in unusual situations – say, lava flowing into your living room, an undersea adventure or a replica of Space Invaders – and asked them to simply react, usually to humorous results. The game was generally well-received upon release and currently sits at a Metacritic score of 80 (we here at XBLAFans suggested players try it before spending hard-earned MSP).

Double Fine isn’t a name that will be new to most gamers; the studio has produced some of the more unique downloadable titles to hit the market this generation – most recently the original Happy Action Theater, but also recent critically acclaimed titles like Trenched/Iron Brigade, Stacking and Costume Quest. The studio is also no stranger to full-fledged retail releases either, with generally well-reviewed titles like Brutal Legend, Psychonauts and Sesame Street: Once Upon a Monster under its belt.

The studio made headlines in February when it announced an upcoming title, currently known as Double Fine Adventure, would be funded entirely through crowdfunding website Kickstarter; the title reached its original goal of $400,000 in just nine hours (the game would go on to net $3.45 million and 87,000 backers by the time the funding window closed; there are currently no plans for an XBLA release). That success has led to a number of developers taking their projects to the website for backing, some of them revitalizations of properties such as Leisure Suit Larry and Wasteland.