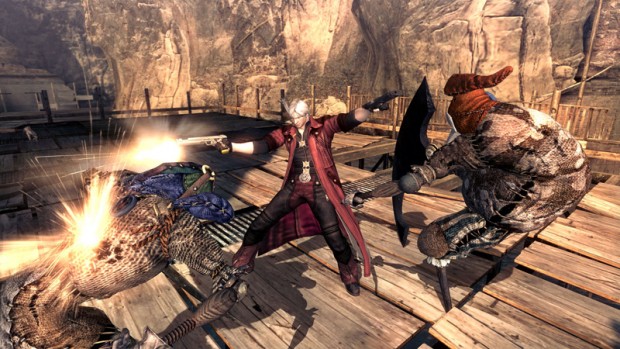 Vergil retains his look and feel from his last cameo in Devil May Cry 3: Special Edition with a variety of move sets and weapons. He can charge up his Devil Trigger to transform into a demonic warrior with enhanced abilities. Less is known about Lady and Trisha, except that Lady will take on Nero’s missions with her varied arsenal of guns and Trish will go through Dante’s.

The game is also being changed slightly with an automatic save feature instead of just save points to make the game more convenient to play. You also acquire Proud Souls and Red Orbs more quickly so you can unlock abilities sooner.

The Devil May Cry series is renowned for its delightfully complex combat systems that let you mix and match all kinds of attacks for improvised fighting. When you’re not taking on an insane variety of enemies with your ever-growing moveset, you’re watching characters beat each other up in perfectly choreographed cutscenes.