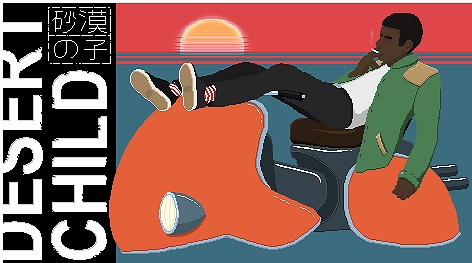 Like many stories told before, people like to set goals in life that sometimes seem unreachable. While trying to reach these goals, they’ll also have to survive life. In Desert Child, you take on the role of such a dreamer in the 2070’s. He needs to reach Mars and enter a big race; he races hover bikes. Not only must he afford a ticket to fly there, but he also has to have quite a lot saved up for entering the race. Your bank account reads $0.00 and you must start from scratch in order to accomplish the goal. It’s a racing game that comes with a heavy emphasis on managing your money. There are plenty of other things to manage, like hunger and damage to your vehicle which make a difference in your races. But these things cost money. If you do really badly in a race, then you must pay more to get things fixed so your next race is a fresh one. You can make decisions to be a good or bad person, or maybe a mixture of both. However you decide to make that stack of cash, it’s all about spending it wisely and saving it.

Money management — What took me by surprise was the way in which money is managed. It was more entertaining than the actual racing. You need $10,000 in order to finish the game. Earning this amount can be easy, but depends heavily on your choices for how fast you can rack in the dough. You can do bad deeds to gain money if you’re bored with racing. There are also other little jobs to do such as pizza delivery. What I really enjoyed was that you can put your money in a bank that gains interest. I always made sure I had around $600 in hand in case I needed to fix the hoverbike or buy food. Also if you’ve been doing illegal activities, the police may find you and you’ll lose all your on-hand money. You can force close the game if this happens to save yourself.  I chose not to purchase parts for the bike; instead, I would just steal them when given the opportunity. That’s what I really enjoyed about managing money. You can earn it and spend it how you want, but just need to make sure you’re saving up for that race. Otherwise, the game never ends. 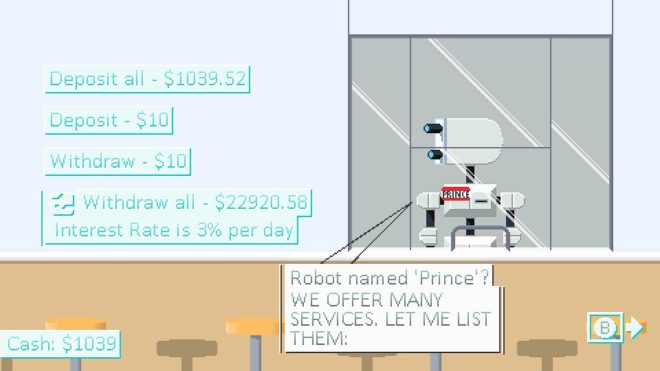 Music — There is just absolute groove going on with the soundtrack. It sets the tone of a chill game. You can even chill instead of racing. I highly recommend you buy the in-game records so you can hear all that is has to offer. It’s simply fantastic. It’s catchy and adds an undeniable enjoyment while playing. Oscar Brittain, who made the game, contributes quite a bit of music himself. I almost feel like he made the game around the music, it’s just that good. I think it really sets the tone to a more casual relaxing experience that you can just pick up and play without much worry about losing.

Style — If you like the classic look of pixels, you’ll be satisfied with the art direction in Desert Child. The pallete of colors is easy on the eyes.  Writing and text are easily read. The colors consist of a lot of warm colors cooled down a notch so that even with plenty of them all in one scene, they aren’t overbearing and bright. It actually feels like you may be playing a game that was designed in-between the Nintendo and Super NES era. I like how this is set in the future as imagined by someone in the ’80s. Not everything makes sense and there is no explaining how you can breathe on Mars or why gravity isn’t an issue. Weapons and ammo are basically made of lasers and energy balls. There is no real attention to detail, and that’s why I believe the style works so well with the gameplay and simple design. 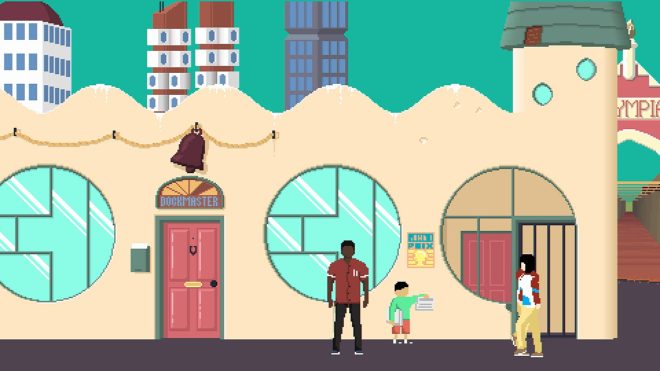 No direction — Besides the starting area, there isn’t much direction in how you should go about things. You’ll find yourself just guessing on how things work. There are two different vendors to repair your bike and I always just went to the closest one who seemed cheaper. The HUD while racing gives an okay amount of information, but it was hard to tell what damage to my bike was actually doing. I only could tell how damaged it was when out of the race. I also don’t know what hunger was doing to me. I do know that one of them, maybe bike damage, was lowering my ability to boost more often (or at all if at 100% damage). I just made sure I had both under 50% and I had no trouble completing the game very easily. The most annoying alternate way to make money was robbing a bank. You raced through shooting statues and Windows (PC) enemies. Whenever I completed these races, I just got a game text saying “hmmmm”. It paid me nothing besides what I picked up on the course. I have no clue what a successful bank hack should be because all you can do is shoot things and I shot them. If there was some kind of hint at least, I would have enjoyed it more trying to figure it out. Instead, you’re left confused and felt like you’ve wasted your time trying it.

Upgrading and choosing weapons — Choosing a weapon can be difficult. I love choices and customizations, but you cannot change your mind later. You’re simply stuck. You would have to restart your game or do a new game plus to play around with the other weaponry. Upgrading itself isn’t a very pleasant experience either. You insert cell blocks and oddly shaped parts into the bike. You have to make choices on which parts you want because they can’t all fit and some even make you sacrifice a lot of room. The real flaw is you cannot easily place and take out the parts. You have lots of cells and must erase them all at once in order to play around with the various pieces. This is pretty annoying and made me avoid upgrading. I didn’t feel like the cells were making much of a difference. My first race to my last with a fully upgraded bike felt pretty much the same. One upgrade I installed was laser-sight. It showed a line to where my bullets would go. Straight ahead, just like I knew they would. So I saw no use in having it. Even this simple update to my bike was a failure, as usually it glitched out and only showed a dot in front of my bike. There is no customization beyond those minor changes in bike performance. You cannot choose the color or add designs to your hover vehicle. I would have loved to have been able to buy different cosmetic items. Even clothes for the main character. Maybe even some new shoes to make him walk faster. 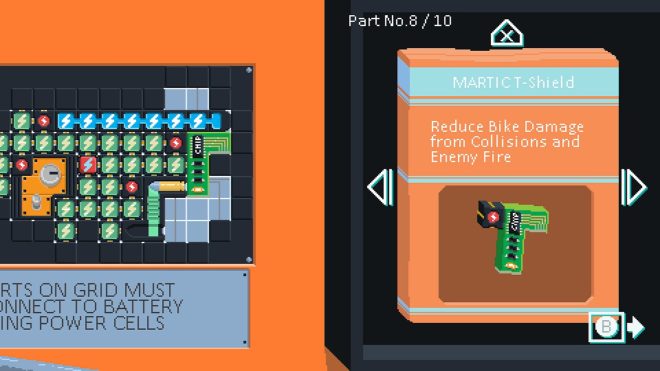 Walking around town — The first town on Earth feels just about right. Everything is close together and it’s just a brief walk to eat and repair your bike. Once you get to Mars, you will have a lot more to explore. While exploring is initially fun, it becomes a bit of a time-waster. You will spend more time wandering around the alleyways than actually racing. Once you’ve completed a race, you will appear back at your bike. Therefore, if you want to do several races to make money, you’ll have to keep walking back to the racing place. There is also the fact that every area you walk into, it changes perspective. Sometimes you’ll just be looking at shoes. I would much have preferred fewer areas to explore. One area is home only to a lone fisherman from whom you can buy a fish. That’s it. I bought the fish once for an achievement then avoided that area. I had to pass by an actual restaurant to get there, so I didn’t see the point. There is no map that exists, meaning you’ll really have to explore and memorize where different areas lead to. I didn’t know there was an area with a bank until more than halfway through my playthrough. A little direction would have been nice!

The actual races —Luckily there are more things to do than just racing because the actual races are a bit on the mediocre side. There’s nothing exciting about it, and it’s quite easy. You are only ever against one other person and it’s just a matter of pulling ahead near the finish line. You’re always neck and neck. You can just shoot the other person a few times and boost ahead to win. There is a grading system in place, but it just gives you information on your earnings for doing certain things. You are never taught what counts as destroying an object. I tend to save ammo and just boost into the various obstructions (like robots that shoot at you). I really don’t know if that counted, but I know for a fact when the other AI-controlled player destroys something, it does not count for you. It seems impossible to have a perfect race because there is no way you can control them blowing stuff up. I found myself only doing races in order to progress the days so that I could go back and do other events that were more entertaining. Like delivering pizza, or testing out a new laser gun for a guy sitting on top of a giant mech. I don’t look at this game specifically as a racing title. There’s a lot more to it. Racing isn’t all that entertaining and gets repetitive. Usually, you just have to make sure you inch ahead of the other competitor at the finish line. Losing just means you earn less money. The strong point is actually managing your money and saving up in order to complete the last Grand Prix. There are clever dialogue moments and lots of humor thrown in showing that it was a fun project that doesn’t take itself too seriously. The music is an absolute pleasure and I was impressed with how many tracks are present, changing as you play. The overall mood for Desert Child is casual. You can play it without stressing about losing. You really cannot lose. Just based on your actions the game might take longer to complete. It’s a somewhat brief experience but is entertaining. Nothing in it will blow your mind but you won’t regret your time while on Mars, chilling and making your dream of success a reality.

Desert Child was published by Akupara Games and developed by Jammed Up Studios on Xbox One. It was released on December 12, 2018, for $11.99. A copy was provided by the publisher for review purposes.