The twin-stick shooter made its debut 40 years ago with Midway’s release of Boot Hill, but it was five years later when the genre took off thanks to Williams’ Robotron: 2084. Williams returned to the genre again in 1990 with Smash TV, which added a second simultaneous player and random weapon pick-ups wrapped in a dystopian game-show theme. Badland Games appears to have taken the gameplay of Smash TV as the inspiration for its value-priced shoot-em-up, Demon’s Crystals.

The player is cast as one of four humanoid demons known as “Uricans” who are forced to fight for their lives when the inhabitants of their world turn on them. Fortunately, the Uricans are well-armed and can collect new weapons that appear at random on the various battlefields. Players can fly solo or buddy up with three other local players. Simple controls – The controls for Demon’s Crystals are as pure as those of its genre ancestors. Left Stick moves your character, while Right Stick points and fires your weapon in the desired direction. This makes it easy to pick up and play for both fans of the genre and new players alike. The latter is important because of the numerous multiplayer modes offered; nothing slows down a party more than having to teach people how to play your new party game. While the game isn’t marketed as a party game, the speedy learning curve and easy controls would make this a good choice for your next gathering.

Cut-and-dried gameplay – Players advance through the main story by clearing levels, with each level made up of one or more “hordes”. Hordes require players to either defeat a certain number of enemies, collect a certain number of glowing crystals, or a mixture of both, all within a given time limit. The Smash TV gameplay is very prevalent here, as weapons spawn at random locations and last for a set period of time; even the crystals appear in random locations, and random shapes, much like the piles of cash and gold did in Smash TV. Changing things up are a mushroom power-up that does just what you think a video game mushroom would do, as well as items that can actually hurt you – for example, you can find your controls reversed, your player uncontrollably dropping bombs that will damage them unless you keep moving, or you could lose precious seconds of time.

Value price – For the game’s low asking price, Demon’s Crystals offers a pretty good amount of content.  There are three general game types available. Single players can enjoy the standard Arcade mode and play through the story, or see how long they can last in Survival. Groups of two to four players can play the story mode as well as six different multiplayer games. That is very respectable bang for the buck, punch for the pound or excitement for the euro. Not so easy on the eyes/ears – On the other side of value pricing is the game’s audio/visuals. Demon’s Crystals is not awful to look at, but it does look to be designed for the Xbox 360, or even the Original Xbox near the end of its life-cycle. The soundtrack also leaves a bit to be desired. In-game, it’s not too bad in a funny-spooky sort of way, but out of nowhere comes an out-of-tune horn section that can make one wince.

No hit-flash – One of the surest ways to know you’re actually damaging a larger grunt or a boss is the hit-flash. However, nobody seems to have told Badland Games that, as they’ve chosen to replace that option with a life-meter that appears over targets. In fairness, it works for grunts, but in boss battles, there is a large hit meter in the center bottom of the screen, which inexplicably is in a different format that makes it harder to tell at a glance just how much damage you’re doing, or if you’re hitting the boss in its weak spots. Even more inexplicably, the hit meter actually has a hit-flash. Just as its protagonists change into bats at the successful completion of a level, Demon’s Crystals has two forms. One is its enjoyable gameplay that sticks to the script for twin-stick shooters pretty well, providing great fun in short arcade-like bursts. The other is its lack of polish and confusing design choices. What would ultimately tip the scales towards purchasing the game will either be the user’s interest in the genre – notably fans of Smash TV due to the very similar mechanics – or willingness to take the plunge at such a low price point.

Demon’s Crystals was developed and published by Badland Games. It was released on May 11, 2017, for $4.99. A copy was provided for review purposes. 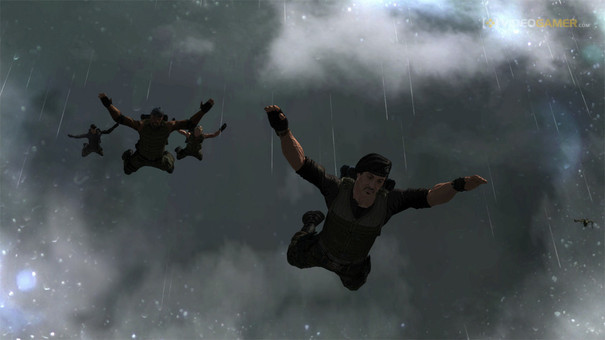