Crazy Machines Elements was developed by Fakt Software and published by DTP Entertainment. It was released August 24, 2011 and retails for 800 MSP.

There are a handful of genres that are largely untapped on Xbox Live Arcade: MMOs, real-time strategy games, even some sports sub-genres such skateboarding. But one that’s never been touched is that of a Rube Goldberg-esque puzzler. Crazy Machines Elements is an attempt to dive in and take the monopoly. Players must complete partially finished machines in order to complete a given objective. Now something like this could easily sink or swim based on the quality, but this is from Fakt Software, a team that is no stranger to machine games, having made them since 2005. 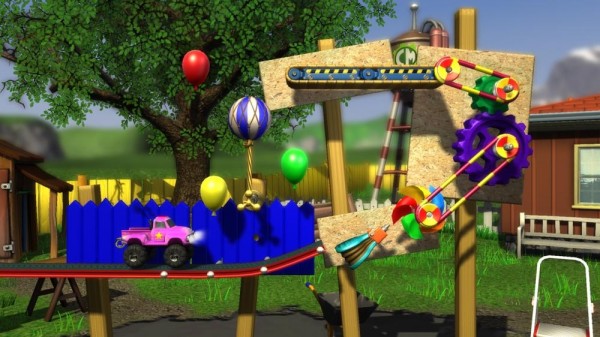 It’s unique – Xbox Live Arcade is the perfect medium for games that are totally unique. So many games that wouldn’t have succeeded at retail have thrived here: Braid, Limbo, Swarm–they all bring something original to the table. Crazy Machines Elements does this in spades. Everything about it is original, nothing feels borrowed from large retail games. Sure, one could argue that The Incredible Machine started it all back in the 90’s, but this is an evolution leaps and bounds beyond that, and the first of its kind on XBLA.

Uniform physics – In real life there’s always an element of error, but thankfully the physics in Crazy Machines are uniform. In layman’s terms that means that if you ran the same simulation twice with no changes it would happen exactly the same each time. It’s absolutely essential in a game like this, and thankfully the uniformity makes the more difficult puzzles a bit more forgiving.

A lot to do – Nobody can say this game is lacking in content. It comes with 100 levels, and each level has optional gold nuts to pick up for a better rating. That alone will keep folks busy for some time, but a challenge mode and editor are also included. Challenges vary in difficulty, so they both help the learning curve and merit from it. The editor is fully fledged with tons of unlockable parts. Think of it as the game’s version of Halo‘s Forge mode. You’re given a budget with which to place objects. Luckily the budget is rather large, meaning the inner child in you can go nuts constructing brain busters. 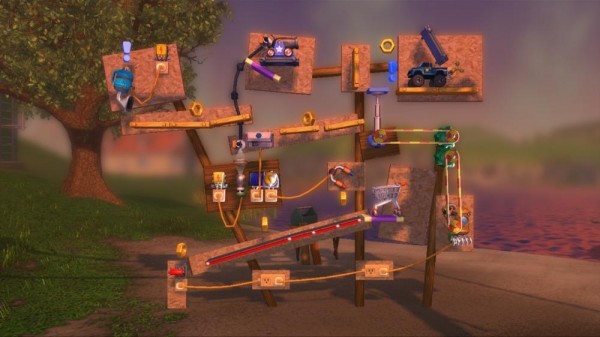 Not SDTV friendly – We hear the tired excuse from the industry a lot: there’s no reason to support SDTVs. We disagree. The fact of the matter is that while most homes now have at least one HDTV consoles are often buried in a bonus room, basement, or bedroom away from the fancy pants HDTV. There are still plenty of consumers that suffer. Now to be fair the game is mostly playable on a SDTV, just be prepared to squint while reading the objective text.

It ends – We can’t say enough about how fun this game is. But at some point the puzzles will be solved, the challenges completed and you’ll run out of ideas for custom levels. The in-game menu has a Download Content option, however we haven’t received any information on DLC. We’re guessing that since they option is there that there’s hope yet. 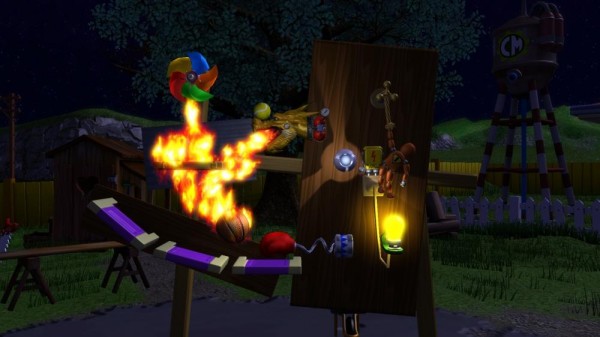 Crazy Machines Elements embodies one of the great principles of Xbox Live Arcade: giving players a unique experience at an affordable price. There’s just so little not to like about this game. It’s charming, it makes you think, it has a truckload of content and its reasonably priced. In fact we’d say you’re “crazy” not to take this one for a spin.