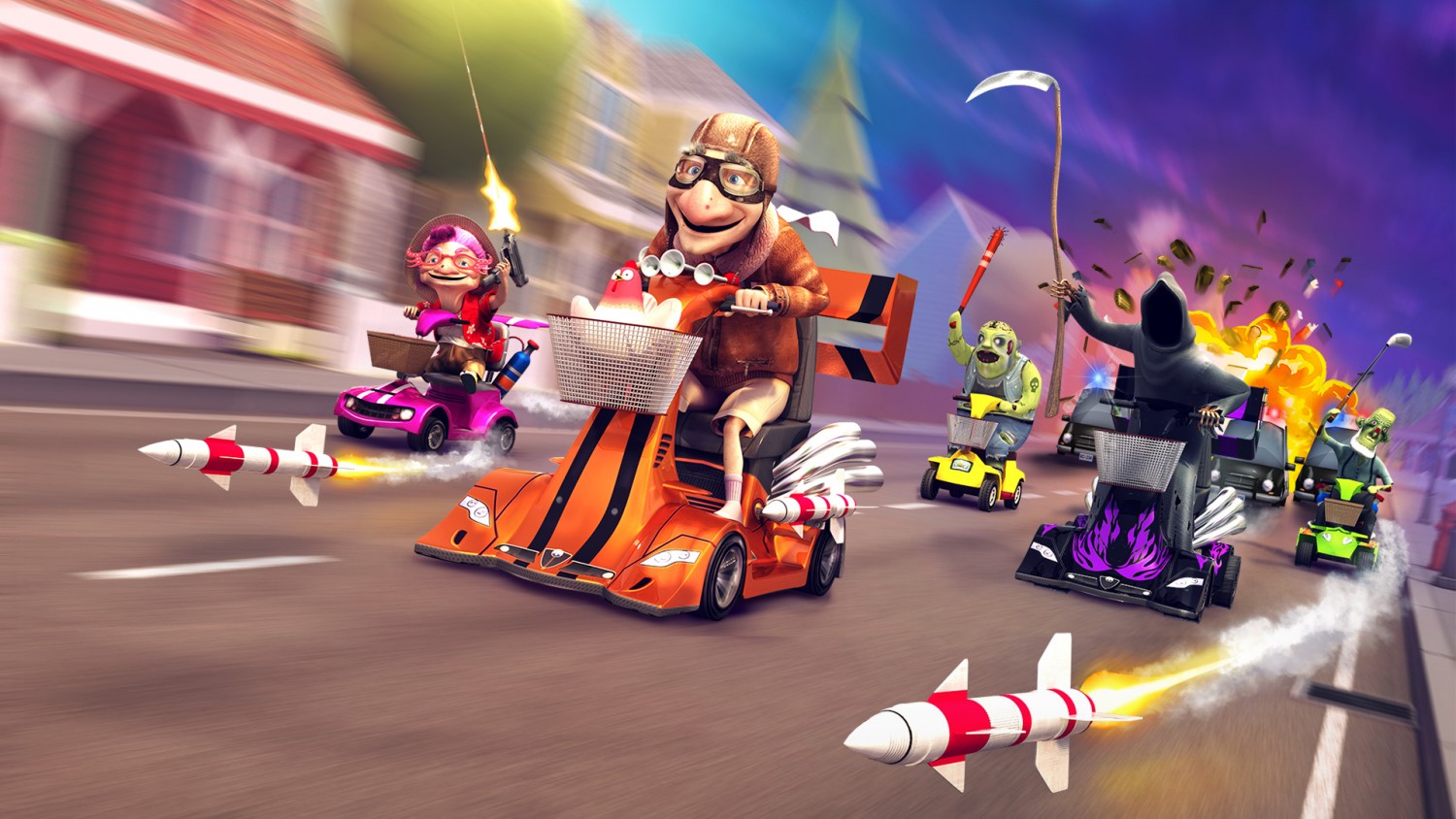 Coffin Dodgers is a kart racer with a story following a race between retirement village residents and Death, literally and figuratively. Players race to finish higher and higher to avoid Death claiming them and returning them to the world as zombie drivers. You’ll choose between seven different residents of Sunny Pines retirement village to race as. Each character, while unique in personality, drives exactly the same, so there isn’t much variation.

Development studio Milky Tea is home to employees who were involved in Project Gotham Racing, Blur, Bang Bang Racing and Drive Club, making it easy to assume that they know a thing or two about racing games. Coffin Dodgers to be set-up for success with a knowledgeable team and a console with few kart racers, so it comes as a surprise that it struggles as much as it does with the basics. 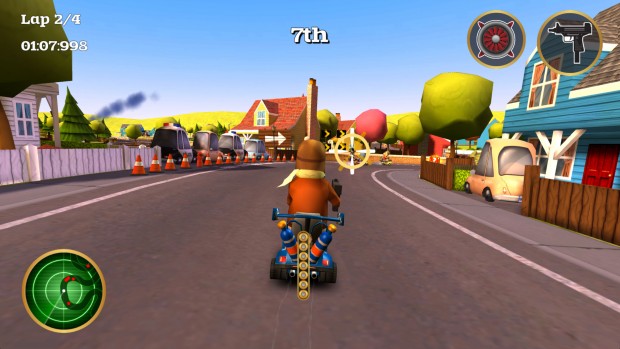 Morbidly cute and funny — Coffin Dodgers is completely absurd but also morbidly cute and delightful. As mentioned, the characters are racing against one another to stave off their deaths, and each character has a short and humorous backstory that adds some much needed life to the game. The story seems to know how off-the-wall it is and uses that to its advantage by causing laughs at the sheer ridiculousness of everything that is going on.

Split-screen four-player races — Playing local multiplayer with four people is still as fun as it’s ever been, especially when it runs as smoothly as it does in Coffin Dodgers. The tracks feel more lively, and the races feel more competitive with three other real friends. The only issue is that there still isn’t much to keep the fun going for more than an hour or so despite what playing with friends adds to the game. 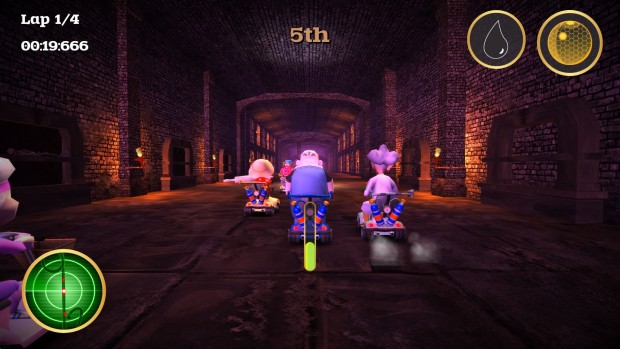 Not a lot of track variation — There are 13 different tracks in Coffin Dodgers, but only four of them feel unique. The majority of courses lack character, and oftentimes the only distinguishing feature is how hard of a turn it has. However, the four tracks that do manage to feel unique are fun to play time after time. Each one manages to craft a design that makes the race actually feel fun to take part in rather than a mindless task to be completed.  While the four tracks are great, they aren’t quite enough to keep the fun going into the night, leaving Coffin Dodgers a kart racer best suited for short bursts.

Power-ups — The power-ups range from practically useless to mediocre. Most of them are only good in very select instances, and the lack of the ability to throw items in both directions compounds this problem. All projectile items can only be used in one direction; this means that a slippery oil spill can be thrown behind the player’s car but not in front, and that rockets can only be fired in front of the player and never behind them, etc. The ability to hold two power-ups and to switch between them are both unlocks in the story mode that have to be purchased using in-game currency. This means that a fundamental aspect of playing is inaccessible until players decide to upgrade, usually at the cost of delaying the improvement of speed, acceleration, etc.

Controls are just serviceable — While the controls don’t do anything particularly innovative they also don’t hinder the racing in any noticeable way. I never felt as though I was fighting them in order to drive, and a loss can never really be blamed on them. At the same time, a sense of mastery of the game never comes because the controls, coupled with the tracks, are so simple that the difficulty curve feels like a horizontal line.

Innovative ideas falter — Coffin Dodgers introduces two new ideas into the kart racing genre: a melee button and an open world, neither of which find much success. The melee button is a somewhat useful weapon during races, but it amounts to nothing more than mashing the “B” button when near other racers, which isn’t fun or satisfying in the slightest. The open world allows players to drive around a united version of all the maps and play a mini-game called “Crazy Granddad.” Crazy Granddad tasks players with collecting as many collectibles scattered around the map as possible within a certain time frame while being guided by a giant overhead arrow pointing to the next object. This is fun for handful of attempts, but the fun doesn’t last much longer than that. Neither Crazy Granddad or the melee attacks add anything worthwhile to the experience.

Extreme rubber banding for everyone but the player — The AI rubber banding is fairly apparent, but most of the time this isn’t too big of an issue in racing games, and it’s event to be expected, at least to some degree. Unfortunately, it’s so extreme here that the game can become incredibly frustrating when the same kind of help isn’t extended to the player. I dropped from first to last in multiple races by lap two as I was knocked off my kart by nearly every other AI kart in the game in succession. Once in last I would stay there for the rest of the game because I would rarely get a useful power-up, to the extent that a power-up can be useful in Coffin Dodgers, and I would often finish the race without seeing another soul on the track. 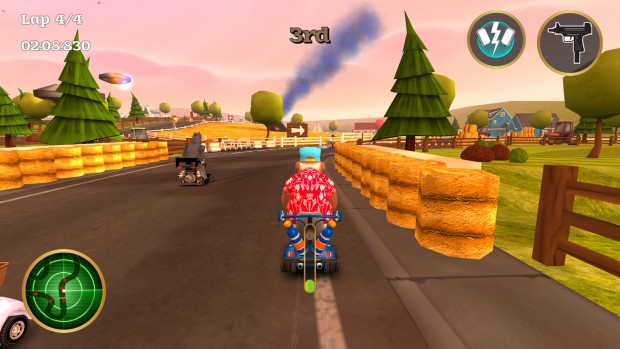 On a system with limited kart racing options, Coffin Dodgers seemed poised to gather fans, but it is ultimately held back by not bringing anything of value to the table other than simply being a kart racer. The tracks, power-ups and controls aren’t offensively bad; they’re just average and lacking in innovation. Coffin Dodgers can be a good bit of quick fun with friends, but don’t expect most to stick around for more than a few races or an hour or so for the most dedicated drivers.

Read More
Newsbits: Looking back at some indie titles you may have missed