Choplifter HD is developed by inXile Entertainment and published by Konami. It was released on January 10, 2011 for 1200 MSP. A copy was provided for review purposes.

Choplifter HD is the revival of a franchise first seen in 1982 on the Apple II. The game sees the player take the flight stick of a helicopter pilot traversing foreign lands ravaged by war, saving refugees. Now, inXile Entertainment brings the series into the current generation as an XBLA title with hi-def graphics, achievements and the whole shebang. Each level sees you traverse across a two-dimensional plane to rescue the refugees while avoiding (or blowing away) generic terrorists. Some levels are just that straightforward, while others toss in additional obstacles, like necessitating refuel stops or throwing an injured refugee with a timer into the mix. 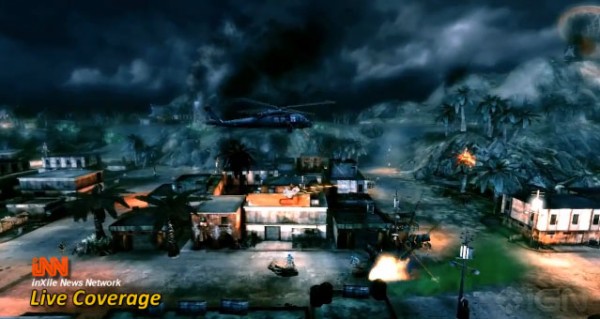 A Blast from the Past – Fittingly, Choplifter HD plays like classic helicopter shooters of yesteryear; it’s in the same vein of Desert Strike, Super Thunder Blade and…well, Choplifter. The classic, fast-paced action-movie-at-the-arcade feel is probably the game’s biggest strength and makes the game an easy one to pick up and play.

Tons to do – Each of Choplifter’s numerous levels is ranked, with performance earning the player anything from one to five stars. Earning stars unlocks new, more powerful choppers, which can be used on subsequent level playthroughs to earn yet more stars (a default chopper has to be used the first time you run through a level). Add to this a secret objective in every level (usually rescuing a foreign news correspondent) and completionists will have plenty to keep themselves occupied. 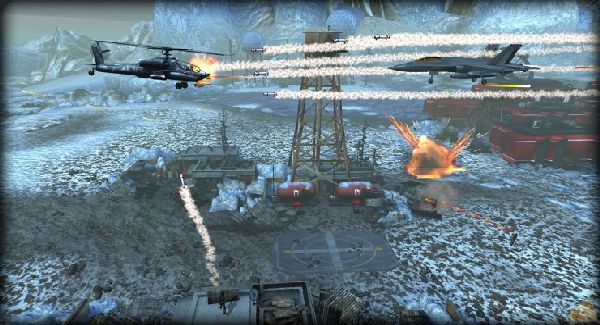 Hard to fly – Choplifter’s controls can be a little on the airy side; sometimes your chopper will move just a little bit further than feels natural or come down slightly faster than you’d expect (which can sometimes lead to…let’s say unfortunate ends to the refugees you’re supposed to be rescuing). They aren’t totally unresponsive, but they don’t feel as tight as they should, which can lead to some frustrating moments, especially when you’re trying to earn those stars.

B-Movie dialogue – The voice acting in Choplifter HD is, for lack of a better word, awful. That said, it’s awful in a sort of charming, B-movie, so-bad-it’s-good-kind of way…for the first few levels. After that, the poorly-voiced, unfunny quips start to grate. It doesn’t help that the entire script has been exhausted by about the fifth level; about the eighth time you hear your gravelly-voiced gunner sarcastically note that “We’ll send flowers” after blowing away a terrorist, you’re more than ready to put the TV on mute.

Braaaaains – The game inexplicably takes a break from the normal action of rescuing refugees to drop you in the middle of a zombie apocalypse. When this happens, you’re not tasked with rescuing survivors so much as you are with defending locations from an undead onslaught. This in itself isn’t a bad thing. However, the loose aiming controls can make things difficult, as it’s game over if even a single zombie breaks through the barricades. Add to this the fact that the undead seem to be there for no other reason than to capitalize on the popularity of the most pervasive video game enemy since the Nazis and you have portions that are frustrating and feel out of place.

Price tag – There may be a lot to accomplish, but overall the gameplay isn’t terribly varied, meaning the player finds themselves essentially playing variations on the same couple of level types over and over again. This isn’t necessarily a detriment until you consider the cost of the game: 1200 MSP. This seems like a bit of an uneven cost-to-content ratio, and some might be turned off by it. Something in the realm of 800 MSP might have been more appropriate. 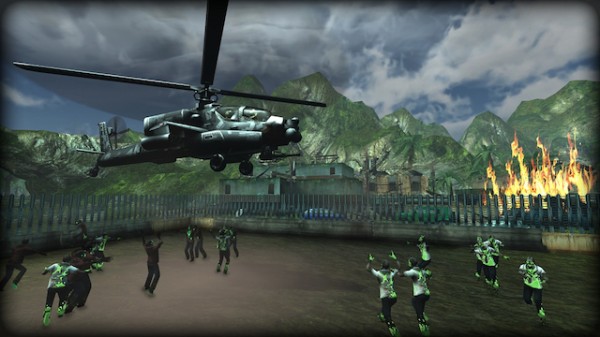 Is Choplifter HD worth your time? Well, yes and no. There’s a solid game here – if not a blockbuster one – beset by some problems that, admittedly, boil down to taste for the most part. Some won’t mind shelling out the MSP, or might think the voice acting is great. Your mileage may vary; in the end, we recommend playing a trial version before committing the cash.