Chivalry: Medieval Warfare was developed by Torn Banner Studios and published by Activision for Xbox 360. It was released December 3, 2014 for $14.99. A copy was provided for review purposes. 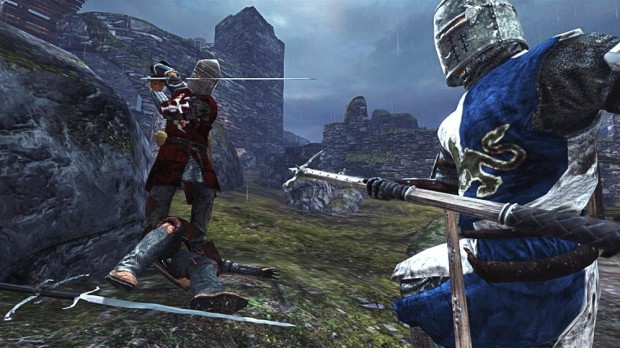 Within the first five minutes of booting up Chivalry: Medieval Warfare, I was absolutely certain that I would hate it. After a year packed full of dazzling next-generation titles delivered via the might of Xbox One, I was ill-prepared for Chivalry‘s low-res textures and clunky combat; in fact, the whole thing repulsed me. Regardless, I ploughed grimly forward like one of the stoic feudal knights to whom Chivalry pays homage, chopping, hacking and bludgeoning my way through one foe after another – and as the body count mounted, so did my respect for this brutal, bloody title.

Battles take place between the rival forces of the Mason Order (bad/red) and the Agatha Knights (good/blue) as they vie for control of their fictional kingdom. Whilst it is possible to play against up to seven AI bots, the real fun can be found in multiplayer battles featuring 12 human combatants. Each player chooses a class from the four available, including an archer and three melee fighters ranging from light through to heavy in terms of their weaponry and armour. More on that later, though; let’s cut right to the bone and find out if Chivalry is worth your hard-earned cash. 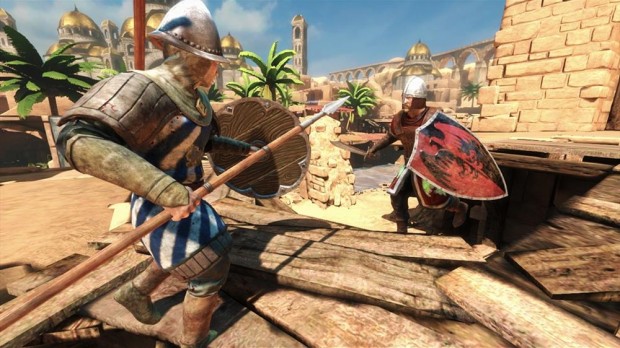 A bloody good time — The key selling point of Chivalry is that it goes to some length to recreate the carnage and slaughter of a medieval battlefield, and, yeah, that’s no bad thing. Whilst the initial look and feel of the game is unattractive and clumsy, the robust tutorial will soon have you swinging blades, clubs and axes with ease, timing your strikes to perfection and dodging or parrying with aplomb. What begins as a slow and uninviting grind rapidly evolves into a calculating dance between warriors in heavy metal. Battles between multiple combatants quickly descend into chaotic slugfests that add to both the enjoyment and authenticity, but purists and technical-minded gamers will be especially pleased to hear that the most disciplined of fighters will usually be the most successful.

Deadly force — Torn Banner has sought to include as wide a range of medieval weaponry as possible in Chivalry. In addition to a number of the more devastating, inventive and often outright cruel killing implements of the period, such as siege weapons and castle defences. Broadly speaking, weapons and armour are decided by the choice of class: archers provide ranged support, whilst men-at-arms, vanguards and knights/crusaders offer light, medium and heavy melee infantry. The man-at-arms is uniquely able to perform a dodge move, whilst the knight has access to heavy weapons and armour from the outset. The vanguard occupies a middle ground that includes axes, polearms and the like, which offer a decent mix of speed and power. All things considered, the balance of power across these classes is good, and each is useful in its own way. Progression comes in the form of a simple XP system, but the number of weapons that can be unlocked and used to customise each class is decent, leading to elongated gameplay and a sense of reward for those who persevere.

Theatres of war — I was initially underwhelmed by the range of maps offered by Chivalry, as well as the compact size. In actual fact, though, the number of maps is limited to six, and they are both varied and put to excellent use across a number of interesting modes. Team Objective, for instance, typically has one team defending a series of objectives whilst the opposing team attacks them. These objectives range widely from pushing a battering ram to a castle, smashing the door down and then killing a monarch through to burning a village and murdering its inhabitants. These same maps are reused in Deathmatch, Capture the Flag, Team Deathmatch and Duel modes in different ways. Most are cut down deliberately to ensure a faster pace, and once I got used to it, it became a perfectly logical design decision. 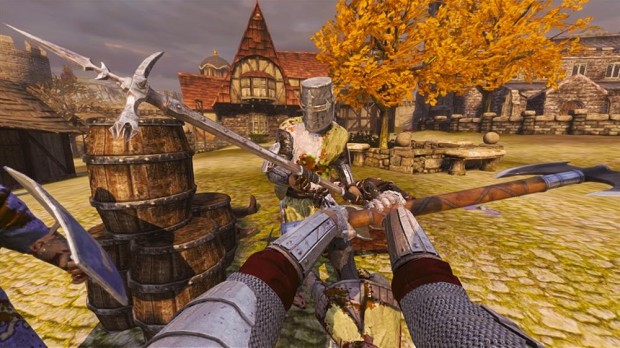 The pauper or the prince — Much as I grew to enjoy Chivalry over the time I spent playing it, it is still undoubtedly rough around the edges. Despite Torn Banner’s best efforts to create a rich and often colourful range of environments, the textures expose the aging engine room of the Xbox 360, whilst the levels themselves suffer a little from the feeling that they might have been lifted directly from a very early iteration of the original Unreal game. Although character animation is sluggish by design, only leaping enemies look particularly dodgy as they float into the air as if driven by some otherworldly force. Thankfully, a great deal of effort has been spent to ensure that the death animations are detailed and gruesome, which will doubtless please the masochists among us.

Archenemy — I’ve already mentioned that the melee classes are generally well-balanced and enjoyable to play with, but the archer — which should perhaps be the most fun — is without any shadow of a doubt the worst. For a game that is already sluggish, Chivalry takes things to a whole new level with its archery. Arrows take an absolute age to knock, and firing them lacks impact. The visual cue that indicates that the bow is ready to fire is very subtle, which ultimately leads to misfires, not firing at all or button mashing to distraction. Most of these things will result in decapitation as even the sluggish knight will close the distance between him and you before the next arrow is ready to fire. Your dagger might help, but by that logic you might as well be playing as man-at-arms anyway.

Skirmish order — The name says it all, really. This game is called Chivalry: Medieval Warfare, with the operative word being warfare. Yet whilst the PC original supports up to 64 players, the Xbox 360 version supports only 12. This is almost certainly due to a mix of technical and budgetary limitations, but what it really means is that the biggest melee you’ll ever engage in is at best a skirmish as opposed to a full-on battle. I’m plucking at hairs here, but I can’t help the feeling that considering the concessions already made to texture detail, draw distance, resolution, etc., perhaps support for a few more players could have been squeezed in. 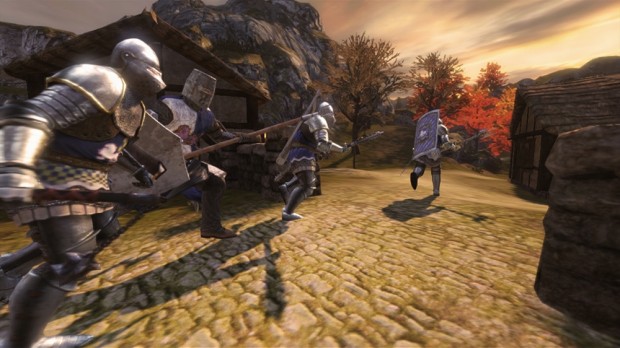 It’s difficult to recommend Chivalry: Medieval Warfare wholeheartedly because at $15 and arriving late as it has during the twilight of Microsoft’s second console, this is a game that has both a limited audience and fairly niche appeal. I managed to fight through my initial reservations not only because reviewing games is my job, but also because I am heavily biased towards this kind of game. I really wanted Chivalry to be amazing, for it to have instant appeal and to blow me away with huge, impressive battles. Sadly, though, it doesn’t achieve any of these things. It does smoulder slowly away, however, calling me back for just one more round, and there is a certain grim satisfaction in delivering that perfectly timed swing that sends a head sailing through the air, or causes a limb to slump, pulsating onto the bloody ground.