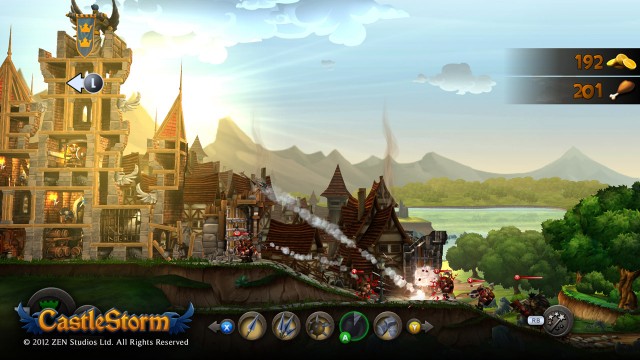 In releasing the latest CastleStorm trailer – complete with its own karaoke-style theme tune – Zen Studios invites players to submit their own karaoke videos for the #CastleStormSong competition. The studio implores “anyone with a love for war and karaoke” to submit links to their own homemade #CastleStormSong music videos,” either via email or Zen Studios’ Twitter page. Oh, and dressing up as “a Knight or Viking, or even an Extra Terrestrial is you so desire,” is also encouraged. Winning submissions will receive Zen Studios slippers, redeemable codes for CastleStorm (when it releases on XBLA) and also for the next Pinball FX2 release. The contest remains open until 11:59pm PST, November 16, 2012.

CastleStorm is a 2D, physics-based, real-time combat game where knights and Vikings engage in battle in an attempt to demolish their opponent’s castle. Players will command medieval artillery, up-close skirmishes and powerful magic spells in a story-driven solo campaign, online multiplayer, local co-op and more. A final release date for CastleStorm has not yet been specified. But for now, here’s some inspiration for your own CastleStorm karaoke video, courtesy of Zen Studios.