BurgerTime World Tour was developed by MonkeyPaw Games and produced by Konami Digital Entertainment. It was released November 2, 2011 for 800 MSP. A copy was provided for review purposes. 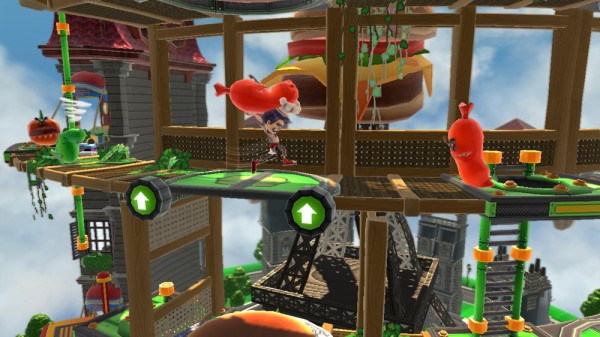 BurgerTime World Tour is a remake of the classic 80’s platformer starring the lovable chef Peter Pepper. The simple concept of making a burger while platforming was intriguing and something no one had honestly really even thought of. In this remake all the classic features that made the original are back: building burgers, evil sausages, killer eggs, jumping pickles and more. As Peter Pepper (or your Xbox Live avatar) you must travel through several large 3D environments across several cities. Also included are boss battles and both local and online multiplayer.

Local multiplayer – It seems as though the industry has forgotten that gamers have family and friends at home that to play with. MonkeyPaw not only gives us local multiplayer, but a total of four players can join in the split-screen action. It’s one of the shining points of the game as it can get very hectic with four people running around at the same time. High score battles make for some great couch competition.

Avatar – Playing a game with the intended character is something that we have all become accustomed to. As games have progressed the ability to customize our characters immersed us more into the game. Things have moved to a whole new level with the ability to use your avatar in place of the main character. It’s a nice touch and sometimes (such as this) it makes the game a little funnier to watch.

Enemies – These are all fun little characters that you’ll want to laugh at more than kill. They range from carrots, to eggs, and even an exploding pumpkin. Each character has its own unique form of attack that constantly keeps you on your toes, especially when several of them attack at once. 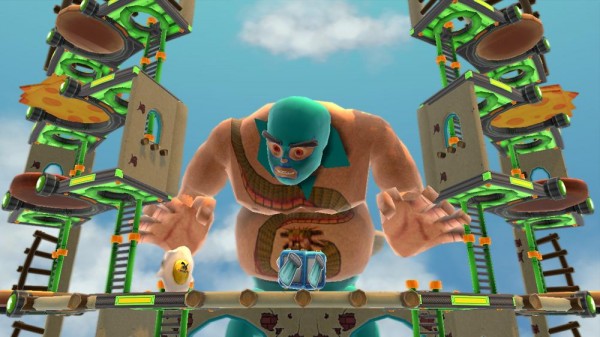 3D Environments – It feels like a natural thing to move a 2D platformer into the 3D world, but here it just doesn’t flow well. Many times, you feel lost or not sure where the missing ingredient is because the levels are all pretty much a circle. This sphere shape also creates a major issue in split-screen, it definitely takes several rounds to get used too as it just feels very awkward and disorientating the first few rounds.

Graphics & art – MonkeyPaw definitely wanted to create a cute cartoon feel with BurgerTime World Tour. Though you definitely get that feel, we can’t help feeling that something just doesn’t look right. The art style is definitely strange–almost creepy to an extent.

Controls – In a platformer precision is always key; sadly BurgerTime World Tour feels heavy and clunky. Every action feels delayed leading to many cheap deaths. Another key issue is getting off the ladders, you should be able to just slide off by pressing left or right, but no dice here. You’re forced to either slide all the way to the bottom or jump off one of the sides. 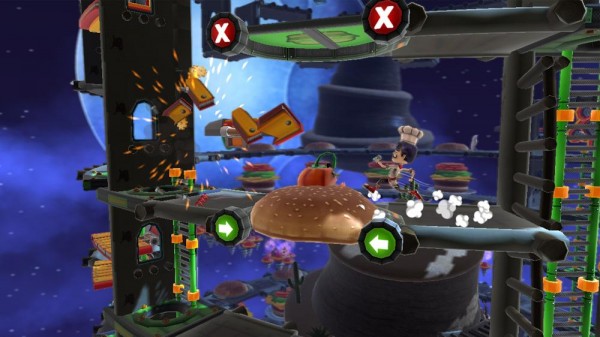 Repetitive – Most of the time a game ends and we wish it hadn’t; we want more story, more gameplay or possibly just a little more bang for our buck. This isn’t the case here at all, the gameplay becomes very repetitive before you finish the very first world, making the next three (10 levels a piece) head knocking agony.

BurgerTime World Tour just lets you down one ingredient at a time, definitely ruining any nostalgic memories you might have from the past. Cool characters and bright colors are just not enough to sell any game that comes out this day and age, especially when it is an old-school game that not a lot of people remember. BurgerTime is a classic that is best left in the past with great memories that have yet been tainted.

Burgertime: WT isn’t a terrible game, it’s just one that doesn’t have a lot of substance. MonkeyPaw did what they could to bring an Atari-era classic back to life, but there’s only so much evolution that can come to such a flat game. It also feels like there was a misguided focus during development. Unnecessary boss battles are found in the game, yet characters feel boxy and poorly rendered. At 400 MSP and with better rendered environments this would be an easy recommendation, but unfortunately this burger is just a bit undercooked.