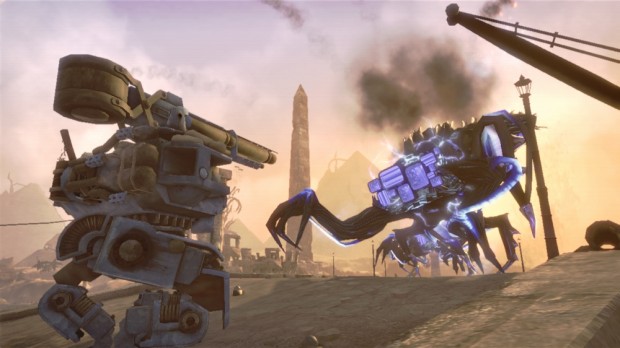 After playing MechAssault on the original Xbox, I became a huge fan of mecha action games (words cannot express how excited I am for Titanfall). The MechAssault sequel was fun, but it focused too much on the Battle Armor, which wasn’t as fun to use as the standard mechs. Then the next generation of gaming came around, and Iron Brigade was one of the few fun mecha games made available for the Xbox 360.

Iron Brigade is actually a tower-defense game disguised as a mech title, but the mecha foundation is still there. I first started playing the game alone in single player and thought it was a lot of fun, but then I kind of forgot about it for a few months. I picked Iron Brigade back up in order to clean up some achievements. For anyone who has played Iron Brigade, this is nigh on impossible to do solo, so I jumped online to find people to help out, and that’s when the real fun began.

Iron Brigade is one of the most fun online co-operative titles I have ever played. As I built up my mech with new customizations, I had to work with my team to determine which turrets were the most useful and which guns and armor style I needed to equip in order to complement those chosen by my teammates. Through strong communication we made good headway in some of the tougher survival levels and I finally experienced co-operative gameplay the way it was intended (not like those unrealistic video game commercials portray them). It was a blast to play, and I made some good friends in the process. It may not be considered one of the greatest games on XBLA, but Iron Brigade was probably the most fun I’ve had online.