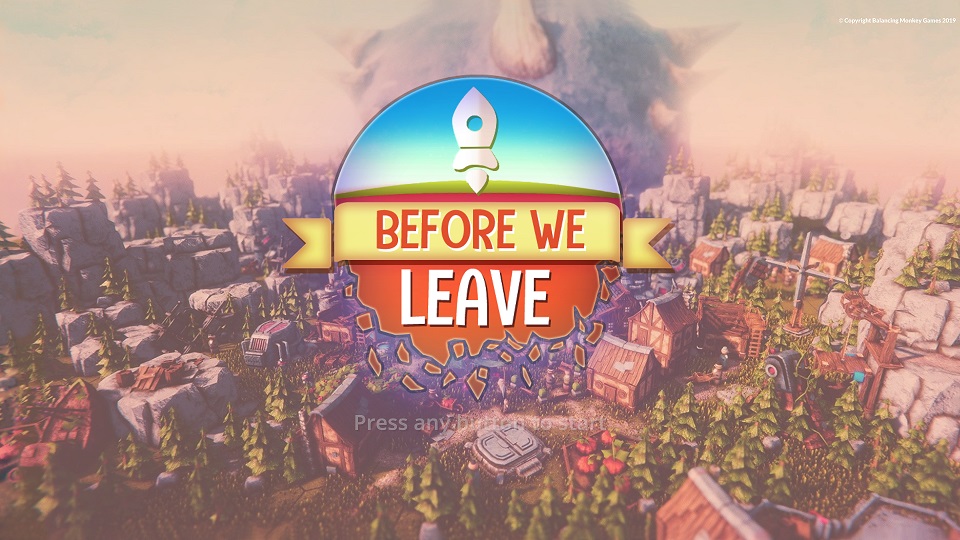 Before We Leave Review: Too Late, I left

Before We Leave Review: Too Late, I left

Casual Building — You start with basic supplies and must create a village. A tutorial will help you kick things off. You’ll be building a population of people and each will have their own tasks to do. There will be a wrecked ship and later a space shuttle which you need to repair and is your main mission. This eventually leads to sailing and space travel. The road to get there is mostly free of stress. You can go at your own pace and the island seems to have just enough resources to upgrade your technology. You can also send your resources to your other islands with your ships. You don’t have to worry about enemies attacking your villagers or being on a time limit. Yes, there are space whales that can ruin your day, but they are introduced later in the game so you can get used to the way the game works well beforehand. There’s also a nice save system that allows you to erase mistakes as long as you remember to save often (there are automatic saves too that happen fairly frequently). It’s a nice experience to get lost in and hours go by without you realizing it.

Before We Come Back — After not playing for a long period of time, you may find it beyond frustrating to play. It is indeed casual and that may be because there had been a tutorial helping you step by step. But if you take a few weeks off, or months, prepare for a horrible experience. Jumping back in without the tutorial guiding you is so painful that you may never want to play again because likely you’ll need to start over to relearn everything. There is a tutorial log that you can access, but all it tells you is what it told you to do (but not how to do it). By now you may have guessed that it is what happened to me. It did, and the first several hours of the game when I played it for days straight was enjoyable. Coming back to it, I feel like I have no hope of figuring it out. I need tools, my planet doesn’t have enough to build anything, and I can’t fly materials from my first planet over because of the same issue. What a mess!

HUD-ifying — While the game is pretty and there’s a special presence of the Peeps that do your bidding, the heads-up display lacks any character or appeal. It’s one of the worst I’ve seen in a strategy game. It’s boring, it’s mostly blue and completely hard to read. Go to build something and you’re met with a row of blue squares with white images. The first one for peeps looks like you’re choosing a burglar. There are two conveyor belt images, right next to each other! Click on them, and you’re greeted with another series of confusing yet basic images, that give more information above them. Everything is so hard to look at and read, you get lost trying to figure out where to build certain things. Why can’t they be full of color and life like the rest of the game? If it’s a power give me a yellow lightning bolt. If it’s a well give me a stone image with water in it, or even a bucket. It’s too bland. Just too simple for its own good, which had the reverse effect of making it horrible to look at.

Missing my Tools — There are only a few basic resources you need to be successful. However, one of these are tools, and somehow later in the game, you can be stuck because you ran out. I guess if I destroy my town I can get out, but I’d rather fly resources up from my other planet. However, if you can run into an issue of not having enough resources to do this. You could very likely get stuck, specifically if you haven’t been playing frequently as mentioned before. Coming back, even figuring out a few things, you’ll kind of just need to start over because you don’t exactly know what resources do what anymore and are out of most of them. It’s almost like you need tools to obtain tools, which is pretty difficult to do if you run out in the first place. Maybe I’m just bad at the game, but I really don’t have the patience to do it all over again. If I loved the game this wouldn’t be a problem, but I don’t, so it is.

A world I enjoyed being in, at least at first. As things get more complicated, soon the HUD becomes a miserable mess that’s too hard to read or look at. Maybe if I started over I would have figured it all out again, but I just couldn’t be bothered. This is not a good experience with a controller and I’m sure it’s much better with a mouse and keyboard where you have more control over what you’re doing at a faster pace. It’s a shame because it was briefly very fun and addictive. Just it wore out its welcome a bit early. If you’re a fan of strategy games you may be able to ignore the negative stuff, because it’s not a terrible game, just one I couldn’t find enjoyable as I progressed.

Before We Leave was published by Team17 and developed by Balancing Monkey Games on Xbox One. It was released on November 22, 2021, for $19.99. A copy was provided for review purposes.

Read More
Deal of the Week: From Dust down 33%