While one of the best things to do in Minecraft is create new games to play with your friends, it can also be rather frustrating. You have to build the stadium, reset everything after every match, and trust that everyone will follow the rules. Playing Minecraft competitively can be difficult, but Mojang, 4J, and Microsoft have come up with a solution to make it easier. Console editions of Minecraft will soon receive mini-games, complete with specially-made maps and pre-determined rule sets. 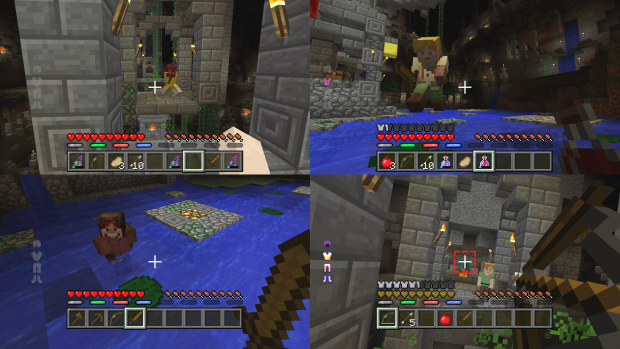 The first mini-game is Battle, due out in June. This is a competitive free-for-all deathmatch where skills and luck will determine the winner. The game doesn’t end until one person is left standing, but if you die the fun isn’t over. Losers will be able to fly around the arena and spectate the game as a bat. While this game mode utilizes pre-built maps, resources will be randomized in chests throughout each arena. Up to eight players online, or four players split-screen, can take part in the fight for survival. If you want to join a game with other community members, you can do so through the new matchmaking system.

The Battle mini-game will be available as a free update sometime next month and comes with three maps. If you really enjoy the mode, you’ll be able to pick up additional map packs for $2.99 apiece.