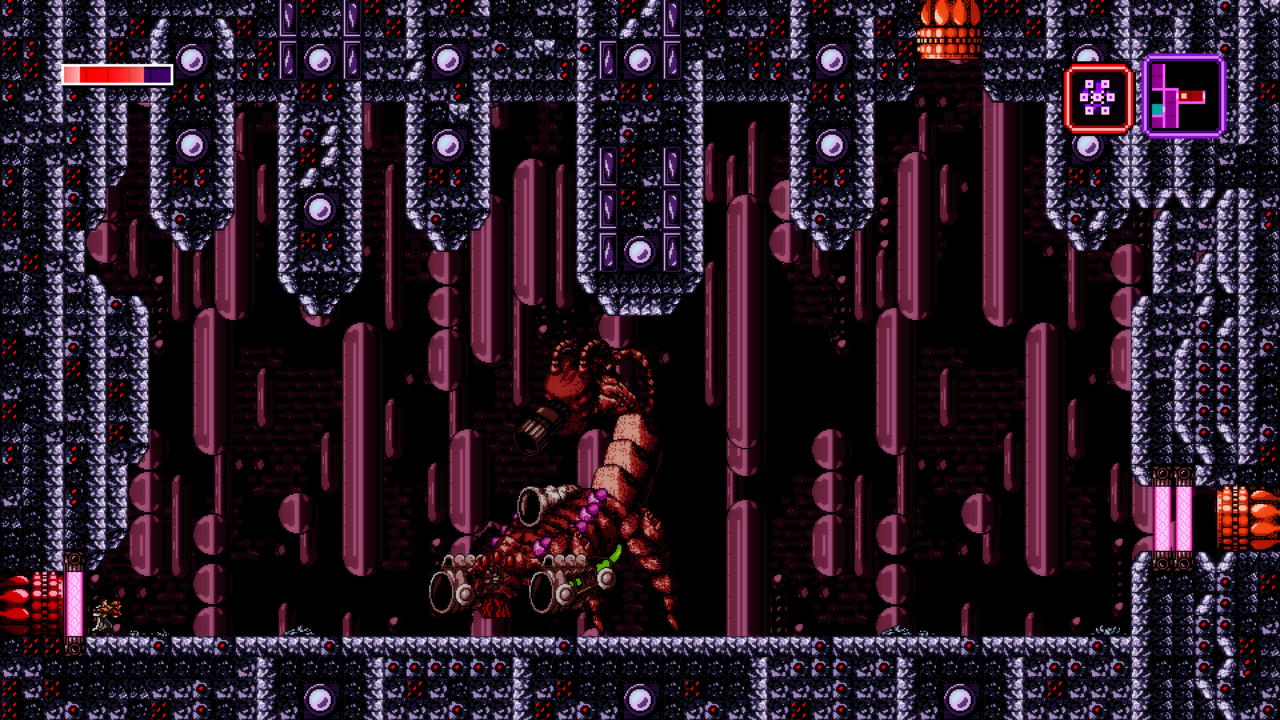 I’ve never been fan of the term Medroidvania, the subgenre label that was made by slamming its two most popular titles together. Not only were the original Metroid and Castlevania: Symphony of the Night released over a decade apart, but Castlevania as a series doesn’t really fall into that genre. Axiom Verge backs me up in this argument; it’s a Metroidvania that puts all the emphasis on the Metroid style.

Axiom Verge is a nostalgic throwback that looks and feels like a long-lost unreleased Super Nintendo game. You play as Trace, an unlucky scientist who wakes up in another world after a failed experiment. Starting with nothing but his wits, he must explore his new reality and discover its dark secrets Like a box of chocolates – When the game begins Trace is pretty weak, but a steady flow of new tools and enhancements will eventually make him an unstoppable killing machine. While this is a concept that comes standard for any Metroidvania style game, Axiom Verge does the basics extremely well. Not only do you get more powerful, but the new abilities you get feel increasingly more creative as you progress. The game starts you off by giving you new weapons and enhancing your movement, but later on you’ll be granted the ability to walk through walls and hack the world around you. To go from barely being able to kill the simplest enemy to being a super-powerful Swiss army knife is a thrill that never gets old.

A whole new world – The reason the game’s powers are so fun is the great playground in which you can use those powers. Axiom Verge has a large, continuous map that is extremely fun to explore. There are a myriad of hidden secrets and shortcuts hidden just about everywhere. The world is just waiting to be poked and prodded, rewarding those who experiment with their powers and really examine the environment. No ability goes wasted or becomes forgotten; the world is built so that you may need anything at your disposal at any time.

Formidable foes – Combat in Axiom Verge is a bit slow, but that’s not a bad thing. Even simple enemies can take a few shots to take down, making fighting more about careful planning and dodging rather than run-and-gun. Enemy encounters offer a nice variety; some rooms are simple enough so that you could sneak through without firing once while others offer a challenging gauntlet of violence. The bosses are a notable delight; they’re massive, visually impressive and take a lot of damage. These encounters will take a few tries before you get the patterns down, so thankfully the developers placed the save rooms right next door. 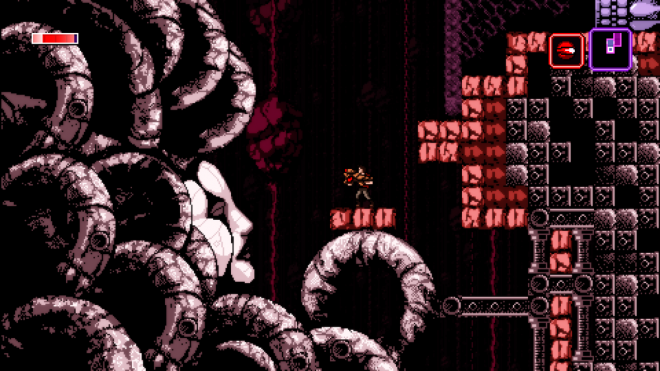 Most annoying sound in the world – Axiom Verge does an amazing job replicating classic SNES sounds, and often times it sounds really cool (especially the music). Unfortunately this was also the sound design’s undoing, as the dated sound effects can create some truly awful noise. Whether it be monster screams or the hum of a continuous laser beam, some sounds are just unbearable to listen to. While I must admit the direction for the sound design is pretty clever, I had to turn the volume way down in order to enjoy the game.

The Chozo One– Time to stop beating around the bush – this game is practically just Super Metroid. While it’s common for indie games to take inspiration from retro classics, Axiom Verge emulates its inspiration way too much. You’ll hear it in the music. You’ll see it in some of the level designs, or some UI elements, or the room transitions. The list goes on. It’s so blatant its distracting; it tends to feel more like a re-skinned mod than its own game. Axiom Verge it does a good job hearkening back to the days when both Metroid and Nintendo were Super, but it goes a bit overboard. While it constantly tip-toes the line between taking inspiration and just plain copying, there’s still enough unique stuff here worth celebrating. It’s incredibly well-designed, a ton of fun to explore and has its fair share of clever gameplay ideas. If you’re a fan of amazing retro titles, this one’s worth checking out.

Axiom Verge was developed and published on Xbox One by Thomas Happ Games. I was released September 30, 2016 for $19.99. A copy was provided by the publisher for review purposes.

Weekly Deals: Xbox 360 BC & Xbox One Sales and Deals With Gold