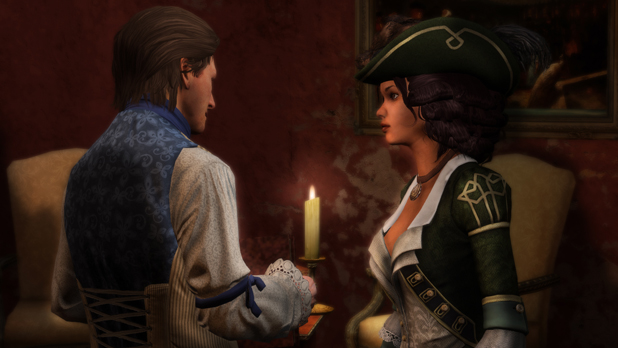 More of the same … – Assassin’s Creed: Liberation will immediately feel familiar to anyone that’s ever spent more than a few minutes on the franchise. The parkour that the assassins are so famous for is just as fluid as it’s always been. The stealth and assassination mechanics feel familiar, and fall somewhere between Assassin’s Creed: Revelations and Assassin’s Creed 3 in how they work. The whole thing feels comfortable, and players will find themselves immediately able to get down to business.

… with a touch of the unique – Liberation stands apart from other Assassin’s Creed titles in the execution of, well, executions. The protagonist, Aveline, has three personas to choose from: Assassin, Slave, and Lady. With each persona the mechanics are a bit different. The Lady persona cannot perform parkour, but can charm nearby men. The slave is less noticeable to enemies, and provides better open stealth. The assassin is easily noticeable, but has all the freedoms found any any other Assassin’s Creed title. Aveline can switch between personas at a dressing booth, and many missions can be played with a choice of persona. This allows players to mold the game to their play style, and provides replayability. There is challenge in returning to an old mission in a persona a player isn’t terrible comfortable with.

Sweet Aveline – Developers and publishers seem to have trouble nailing down the right kind of female protagonist. On the one end of the spectrum you have characters like Faith from Mirror’s Edge, who aren’t terribly visually appealing, and have very little depth. On the other hand we have the Lara Crofts of gaming, who have their enormous lady parts on display. These usually have inversely flat personality characteristics. Aveline then is the perfect female protagonist: she’s attractive, but not without dignity, she’s tough yet lady-like, and throughout the game you get a sense of her soul. Nowhere will you find any sort of female schtick coming to the surface. She feels like a real woman. One with a deadly line of work.

HD graphics – Liberation was an exceptionally good looking game on the Vita, but with a screen smaller than a modern tablet developers can use quite a few techniques to trick the eye. Thankfully the transition to big screens holds up. While it won’t win any awards, the game is perfectly serviceable in HD on a 50″ TV. Characters look the best, with a higher polygon count, crisp textures, and strong animations. Environments, though, are slightly less defined. In close quarters Liberation looks just as good as any other Assassin’s Creed game. Once the draw distance is beyond ~1/4 mile the game’s Vita roots start to bleed through. Thankfully these instances aren’t constant, and the otherwise strong visuals keep the game feeling immersive. 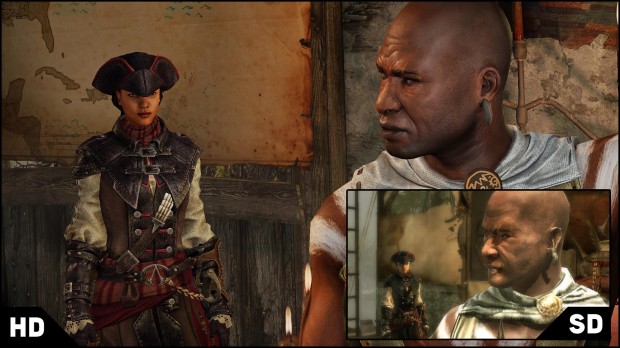 Blatant clues – Previous Assassin’s Creed titles could, at times, become infuriating when one was lost with no real sense of where to go. Sometimes you’d simply roam a city looking for the next clue, only to find you were distracted by collectables or some side mission. Perhaps, then, it was intentional. Liberation takes the opposite approach. Players will never wonder where they need to go, as person-sized orbs direct the player at every turn. At times it feels like Aveline is Ms. Pac-Man going for a high score.

Price – For fans of the Assassin’s Creed series that have not yet played Liberation, the game is a must-purchase. Those who completed the game on the Vita won’t have a lot to come back to, but if it’s been long enough the HD visuals and handful of other upgrades may yet be enough to warrant another playthrough. In the end, however, it all comes down to price. If you were itching to play the game but weren’t able to on the Vita, $20 is fairly reasonable. For anyone else the price of admission is a bit high. When the games on sale, don’t hesitate to pick it up. If you’re wanting to play it now, be prepared to pay the high-end XBLA price. 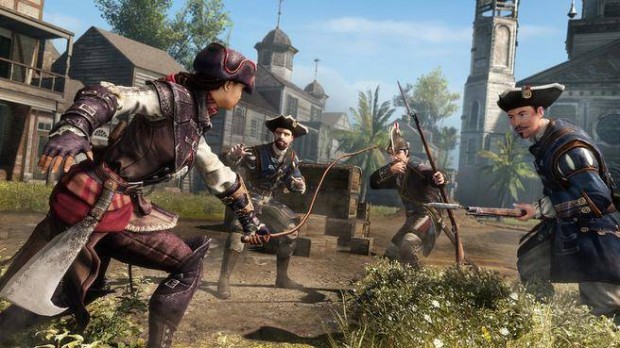 Anyone who is a true fan of the Assassin’s Creed games can’t miss out on Liberation. It’s got a few quirks, but it’s an incredibly solid entry that in large part stands with its AAA brothers. The deciding factor here will be whether you’ve played it on Vita. For those who haven’t, it’s an immediate purchase. For those who have, pick it up on sale. Either way it’s an entertaining game and a beautifully subtle spin on the typical Assassin’s Creed title.