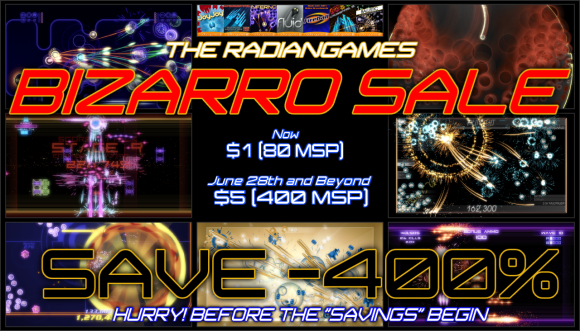 In a controversial and somewhat confusing move, hit developer Radiangames has recently announced that they’d be increasing the price of all their XBLIG titles to 400 MSP. All of the studio’s games have been well acclaimed and were difficult to pass up at 80 MSP, but the new price has fans wondering exactly why the prices would go up this late after release. Luke Schneider of RadianGames has responded that sales have dwindled over time and toying with the pricing model might yield “unexpected results”. Furthermore, he states that a Geometry Wars fan might be able to justify a 400 MSP price point for Ballistic to get more of the same flavor of game, which could justify the pricing for his own sake.

While this may seem immediately offputting, there’s no doubt that a higher price tolerance in XBLIG could truly help developers in the long term. In that context, Radiangames’s promised permanent price hike may ultimately do good for the indie development scene. The question is whether or not consumers will appreciate this particular move or the possibility of a future trend. The price hike will take place tomorrow (6/28), so make sure to check out the 7 titles before they become much more expensive fare.