Pinball FX2 was developed and published by Zen Studios for XBLA on October 27th, 2010. Retails for free, individual tables can be purchased. The publisher provided a copy of the game and 8 tables for reviewing purposes. Pinball FX2 is a pinball game, pure and simple. It never strives to be anything more or less than this, which is one of its greatest strengths. It’s the type of game that someone can get real serious or strategic about, or something that you can just kill time with, like Peggle.

I’m even tempted to say that there ‘s no excuse not to play this game. It is free after all, and only requires players to purchase individual tables for 200 Microsoft Points a piece. Any of the game’s tables can be demoed for free, and anything you may have purchased with the first Pinball FX can be ported and played on FX2 with the game’s improved ball physics. So honestly, what’s not to like? Unless you have a seething, underlying hatred for pinball then you have no reason not to check this game out.

It’s free! – Like I mentioned earlier, Pinball FX2 doesn’t cost anything to download, only the game’s various tables have a price (200 MS Points each). Even better, any of the tables can be demoed for free, so you can decide how much of this game you want to pay to play. Not many games have a pay to play model such as this, except for maybe the first Pinball FX. It’s a very interesting and effective way to get people to check out the game, and it’ll be even more interesting to see if any other games follow Pinball FX2’s example in the future.

Colorful and creative pinball tables – Not to sound like a snobby, pinball elitist, but I’ve played a lot of pinball games. I even used to have a Star Wars pinball machine in my room when I lived at home, which is still there, sadly collecting dust. That being said, Pinball FX2 contains some of the most colorful, elaborate and creative pinball tables I’ve ever seen. They have more ramps, lights, moving parts and bumpers than any table in existence, and all are really interesting to play and experiment with. Each table also features a unique theme and style, ranging from street racing, ancient Rome and a James Bond-type secret agent-themed table, complete with appropriate sound effects and music. It’s easy to tell that a lot of attention to detail was put into each of Pinball FX2’s tables.

Great multiplayer options and leaderboards – Pinball can be a great leisure game to play, but enjoying it with friends and family has always been the best way to play it. Pinball FX2 features both online and local multiplayer, which can be played either splitscreen or one at a time. It’s the type of game you can play with your mom or dad, younger sibling, or your hardcore gamer friend who plays everything, because pinball is just the type of universal game that people can “get.” The in-depth leaderboards add another degree of competition between your friends on Xbox Live, and also give you high scores to shoot for. 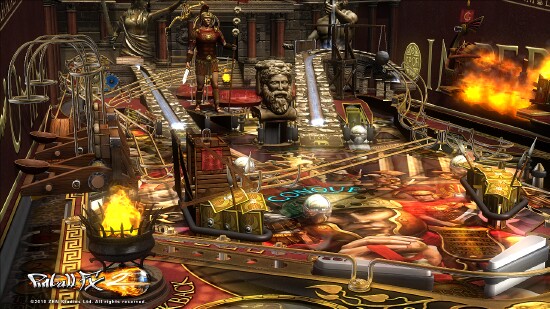 Well, nothing really. Pinball FX2 is just a pinball game, and you probably already know whether or not you like it. There is nothing inherently wrong with this game, or pinball in general, it’s just simple fun that most people will instantly know if it sounds like something they would enjoy. The game’s pay-to-play approach insures that you can get as much (or as little) out of this game as you want, and if you’re willing, there is a lot to do here (it’s the only XBLA game I’ve seen with 650 possible Achievement points).

So sit back, relax, and enjoy some of the best video game pinball you’re likely to see.