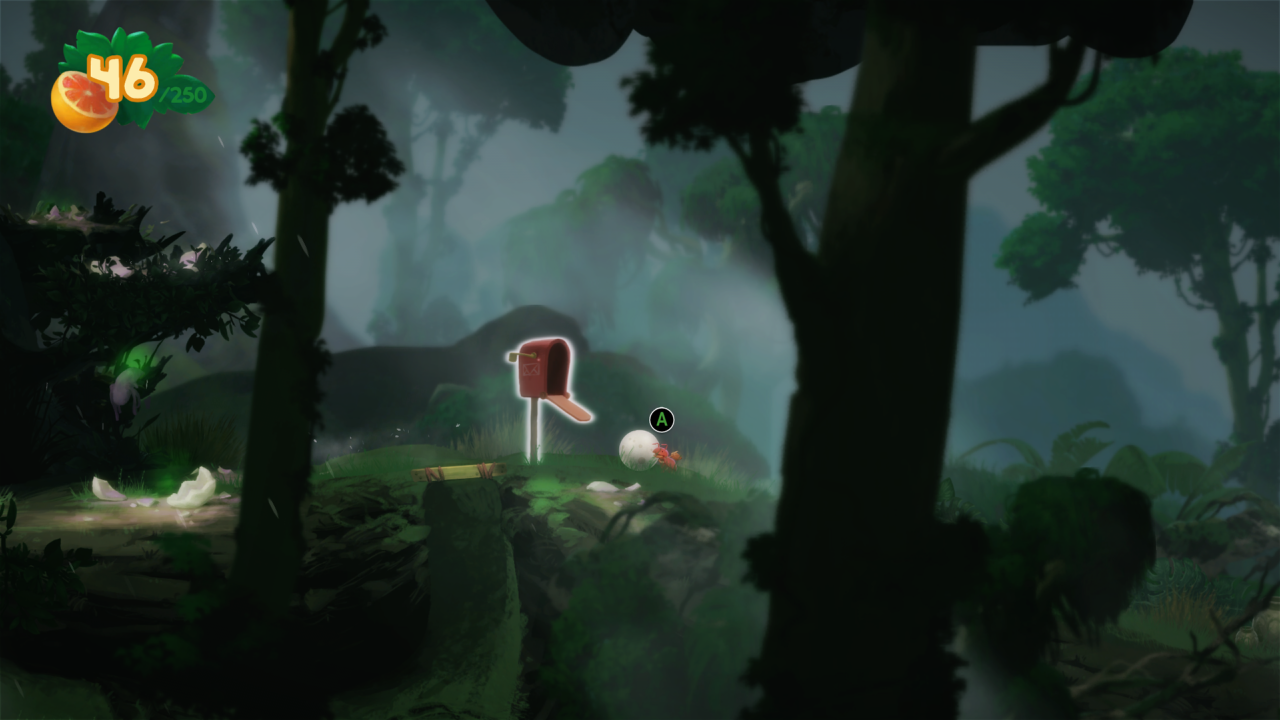 Creating a new combination of two very different items will only ever have one of two outcomes: either they were secretly perfect for each other and beg the question “why did nobody think of this sooner?”, or they’re so blindingly awful it makes you wonder why anyone could ever think it was a good idea. Yoku’s Island Express combines a whimsical open-world sidescroller with hardcore pinball action and actually succeeds in mixing the two. For starters, it makes the obvious choice of making its protagonist a dung beetle, one who thankfully rolls around a sanitary spherical mailbag. His first day on the job is off to a rocky start, as he needs to deliver summons to the island’s leaders to prevent an impending attack. He’s now on his own to find his way around a new mail route, deliver the packages on time and (indirectly) save the world.

Having a ball – While pinball may only be half of the game’s focus, its execution is on par with the greats. Yoku’s only means of self-propulsion is slowly rolling his spherical mailbag; for real locomotion, he has to rely on the pinball flippers and mechanisms spread liberally across the island. Said flippers are controlled with the left and right triggers, and helpfully color-coded due to the world being infinitely more complicated than a single table. Physics are on point, offering the control and accuracy you’d expect from a full-fledged pinball title. You have no direct control over the ball while it’s in the air, as Yoku is helplessly dragged wherever it goes, so it’s as pure as it gets. The gameplay leans heavily into using the same skills you’d use in pinball but increases the scope of what those skills can be used for. Flippers come in all shapes and sizes, used for various feats of platforming, puzzle solving and environmental interaction. One of the more clever bits the game throws at you is a multi-ball scenario that, beyond being fun, actually makes sense in terms of the plot.

Island adventure – Exploring the island is your usual Metroidvania experience – go down open paths, get new skills, use those to unlock new routes. The game plays out on a seamlessly connected map which, while not incredibly big, is densely packed with things to do. The main story will take you on a grand tour of the whole area, but dig a little deeper, and you’ll find plenty of secrets and side content just as well-crafted as the core storyline. To reach most of this extra stuff, however, you’ll need the abilities you learn along the main quest. These extra skills give you more means of exploration without sacrificing the pinball feel. Grappling hooks and makeshift bombs aren’t uncommon platforming mechanics, but by filtering them through physics-heavy gameplay makes them feel new and adds an extra layer of unpredictability. 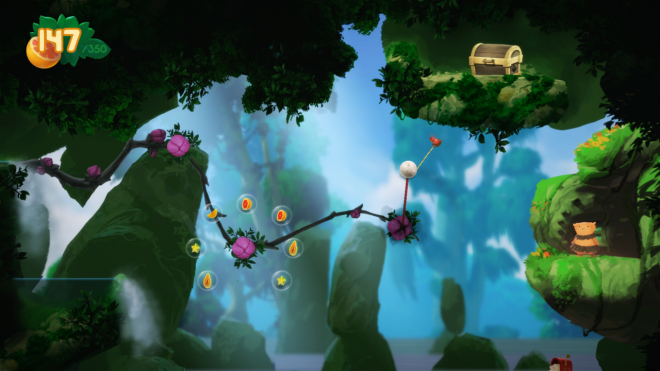 This is nice – While pinball is often an intense battle between you, the ball and the high score, this game is refreshingly laid-back. You never have to worry about losing a life or a ball. You can’t die, you have infinite attempts and the game’s often forgiving in how far a mistake will set you back. That’s not to say it’s easy; some parts can be rather tricky, but the game always supports a rapid cycle of trial and error. The island itself feels incredibly welcoming, free to explore at your own pace from the very beginning. It has a surprisingly diverse array of biomes, every one painted with happy colors and backed by an upbeat soundtrack. 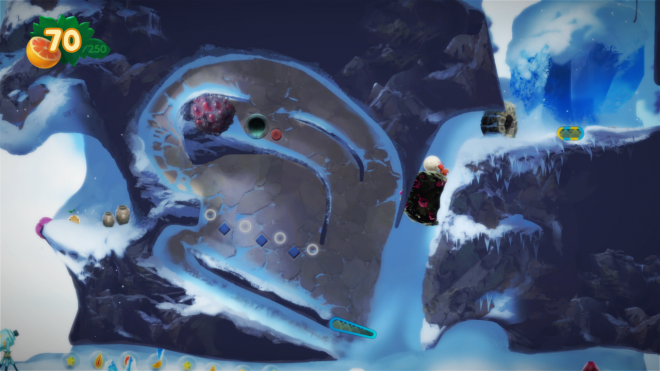 Periodic tables – Blending two disparate genres is never an exact science, and while this is an amazing first attempt, it doesn’t always blend perfectly. The game often resorts to what amounts to be standard pinball tables – a single static screen with two flippers above a gutter in the center. They have all the familiar fixings, from bumpers to black holes to lights that change every time you use a flipper, while rarely digging into Yoku’s expanding list of other abilities. You usually need to complete some objective to unlock the way out, with all the other distractions available to earn extra currency or collectibles. These moments halt the flow of the game, going from open exploration to being stuck in a room for minutes at a time, and become a pain to backtrack through. The game also keeps a behind-the-scenes counter of every time you fall down the drain, occasionally stopping the game dead to show when it hits certain numbers. Not only is this weirdly unfriendly in a usually laid-back game, if the counter goes too high, you’ll be unable to 100% the game. The tables are incredibly well designed and fun for what they are, but it feels like they work against what the game was trying to accomplish. The game’s much more interesting when it goes beyond the basic ideas of pinball to do something impossible to recreate with the standard silver ball.

Slow your roll – Playing on an original Xbox One, the game has some noticeable performance issues. When too much is going on it has the tendency to take it out on the frame rate, sometimes significantly. The game also has trouble loading the world, randomly halting your progress at inopportune spots to load the next chunk. This is most noticeable when using the game’s transit system, an interconnected series of Donkey Kong barrels. The next barrel may seem close, but in transit, you’ll be stopped dead and wait motionless for about 10 seconds. Since getting to a destination involves going through a chain of these barrels, this will likely happen more than once. 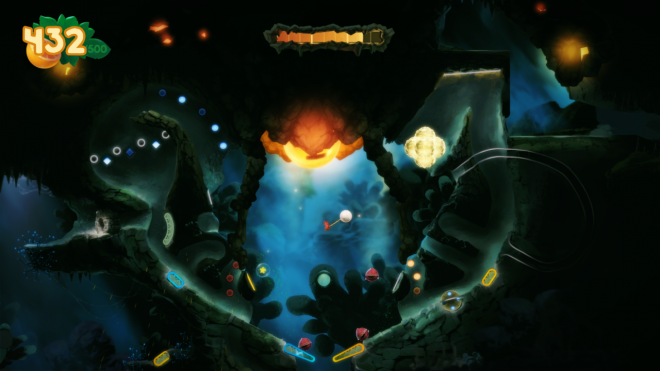 Yoku’s Island Express is a highly compelling mix of genres. Its pinball is fantastic, and its world is full of fun things to do. Through brilliant game design, this odd combo is merged into an inseparable, cohesive whole. The blend is not perfect, off-balanced in a way that will likely appeal more to pinball aficionados than fans of more classic Metroidvania fare, but still does justice to both genres. For the first shot at this unique idea, it definitely hits the mark; Yoku’s Island Express is so fun and charming it’s impossible not to have a blast.

Yoku’s Island Express was developed by Villa Gorilla and published by Team17. It was released May 29, 2018, for $19.99. A copy was provided for review purposes. 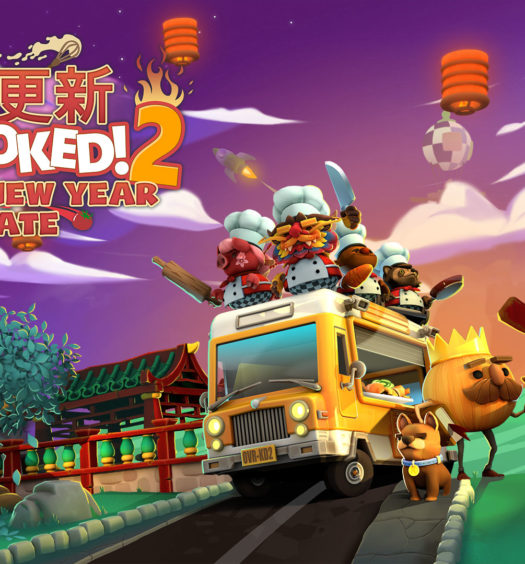