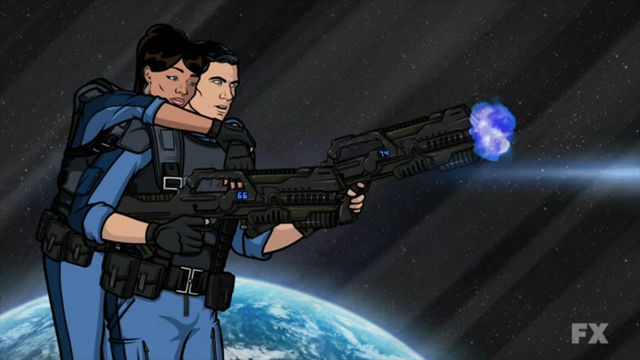 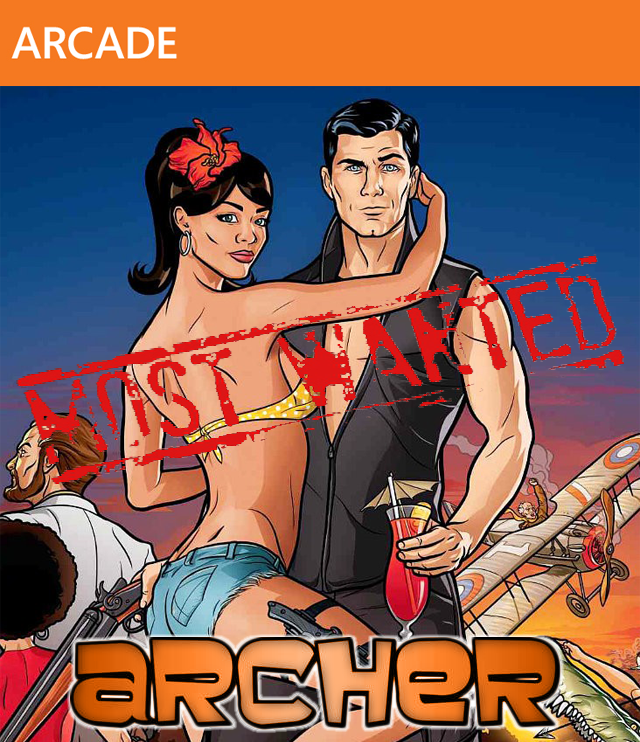 There’s an uneasy moment when the green light flashes on a videogame adaption of a beloved television series. Call it apprehension, call it skepticism, call it whatever you’d like, but there’s a good reason for knee-jerk worry – most of them don’t pan out. Sometimes the source material isn’t really conveyable in another medium; sometimes the ball is just dropped during development. More often than not it’s a little from column A, and a little from column B, even when the planets have spectacularly aligned to guarantee a surefire success. Whatever the cause, cross-pollinating entertainment can often deliver a dud, but it can also bring about completely new ways to enjoy something we love. In the 24/7 cacophonous overload that is modern-day television programming, there are few series more suited for the game treatment than Archer.

For the uninitiated, Archer follows the exploits of the International Secret Intelligence Service (ISIS) which trots the globe undertaking missions ranging from espionage to personal errands. Without overselling it, Archer is one of the most cleverishly written and reliably funny shows on television, thanks to the character-driven plots that don’t so much focus on the mission at hand but rather the many ways in which the tidy collection of lovable psychopaths will unflinchingly undermine and berate one another.

So what makes Archer suited for the fertile lands of videogamedom? In a word? Everything. Logistically, the show takes place in an intentionally ambiguous time period, seemingly set during the ‘60s while regularly incorporating elements of contemporary culture and other historical eras. The agents have been to space, the ocean floor, a pirate fortress, and most countries in the known world, especially the ones ending in “stan.” With a license to kill, seemingly unending resources, diplomatic-ish immunity and a never ending supply of super villains, communist and/or tracksuit-sporting cyborgs, environmental terrorists and.. regular terrorists – there’s literally no limits to what you would be able to do in this universe. The real question then is – how is Archer not already a videogame? 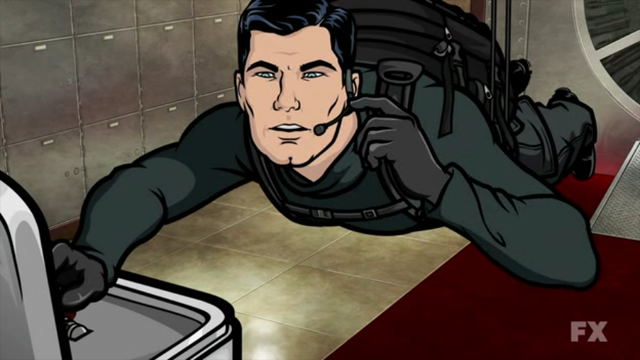 The write stuff – For all its preposterous set pieces and far-fetched plot threads, the glue that holds Archer together is the writing. Regardless of what’s happening at any given time, you can always expect a witty one-liner, a back-handed remark and occasionally the perfect storm of soul-cleaving emotional abuse. Every line of dialogue is seemingly engineered to capitalize on the vulnerabilities of another character and simultaneously serve as a callback for future burns. The devil’s absolutely in the details throughout every episode, and it’s not uncommon to discover subtle in-jokes during second and third viewings. That same attention is paid to the vaguest of references rooted in fact. These little morsels of real-world knowledge ranging from the current geopolitical climate to an obscure poetic stanza help to flesh out characters that regularly prove woefully unqualified for their line of work, let alone as freestanding members of society.

Complimentary gameplay – The beauty of Archer: The Videogame lies in how well the source material could translate to the current videogame landscape. Now more than ever, the right kind of attention is being paid to strong game writing while the demand for sneaky, shoot-y action thrillers is as high as it’s ever been. Take one part of each, add a splash of branching cause-effect storyline, garnish with quicktime dialogue options and boom – you’ve got a can’t-miss cocktail sure to whet the appetite of the coveted 17- to 34-year old demographic. Think of Archer: The Official Game of the Television Series like an animated Splinter Cell – except with a high-functioning alcoholic – crossed with the decision-based branching storylines and time-sensitive dialogue trees of The Walking Dead, Heavy Rain and Alpha Protocol. The important part is finding the balance between action, mission-based plot advancement, and character interaction without overshadowing any one part. It’s the same formula that keeps the show moving at a brisk pace while simultaneously feeling like we’re getting completely off-topic. 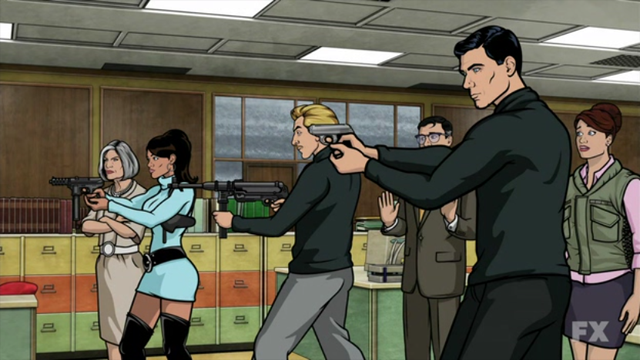 Extra points for viewpoints – Archer has assimilated the standard TV formula of a singular plot involving one or two lead agents while the ensemble cast supports the narrative through loosely related, secondary story arcs. While it’s certainly a trope, the series has arguably perfected it thanks to the always engaging personalities of the secondary characters, leaving us regularly wanting to see more of the subplot. FX Presents: Archer: The Official Game of the Television Series would provide the perfect jumping off point to explore more of those secondary characters and environments that the show can’t commit valuable time to in a brisk twenty-minute episode. We’d love to see the playable viewpoint shift from Sterling Archer and Lana Kane doing mission-focused fieldwork, to Krieger conducting God-knows-what experiments in his lab. We want to be able to roam the halls of the ISIS office, hit the break room as Pam to heat up some chili, watch Cyril pour out his insecurities in the men’s room mirror or burn something in the emergency stairwell through Cheryl’s propensity for arson. Not only would this serve as a healthy dose of fan service, but it could change up the pace of the gameplay from action to “mini-games” all while providing opportunities for Archer’s trademark character interaction.

Classic Archer – It goes without saying we’d like to see the original voice actors reprise their roles in the videogame. Like, obviously, duh. Similarly, we’d like to see the studio maintain creative control over the title, outsourcing the gameplay mechanics to an independent developer while using their own creative team to serve as animators. In addition, it’s not commonly known – why would it be? – but the environments generated for the show are created in 3D wireframe first, then painted by show’s studio artists. We’d like to see the those skeletal frames adopted as playable levels in the game, hopefully saving money on development and ensuring the legitimacy of the environments already crafted by the studio. Basically, we want to keep everything about Archer that makes it work, without diluting the mixture by relinquishing creative control during the publisher/developer negotiation. There’s a lot of moving parts before a videogame ever gets made, and we’d like to see all of the original pieces keep their place. 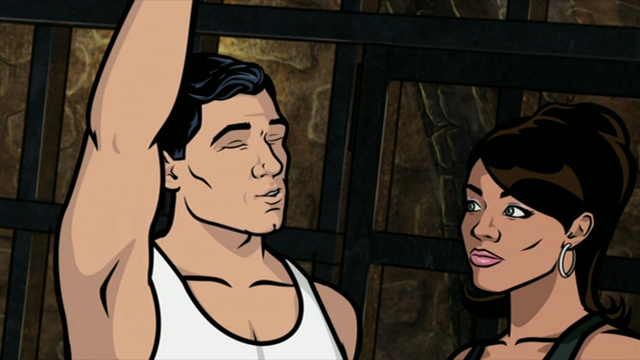 As we mentioned a few times already, there really isn’t a better property suited for adaptation. Aside from its continuously growing fan base, Archer is the complete package when it comes to the principal videogame demographic. You’ve got wit, sarcasm, action, violence, drama, sex, comedy, and strong relatable characters chock-full of shortcomings. Though the show carries an MA rating – which should carry over to the game – the success of mature-themed, character-driven digital titles have already been proven thanks largely to Telltale Games. If the creative minds behind the animated series put the same talent and attention into the game that goes into every episode of Archer, there’s no way they wouldn’t nail it. Boom – phrasing.