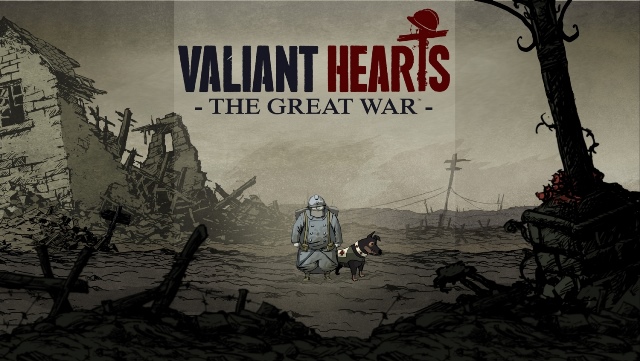 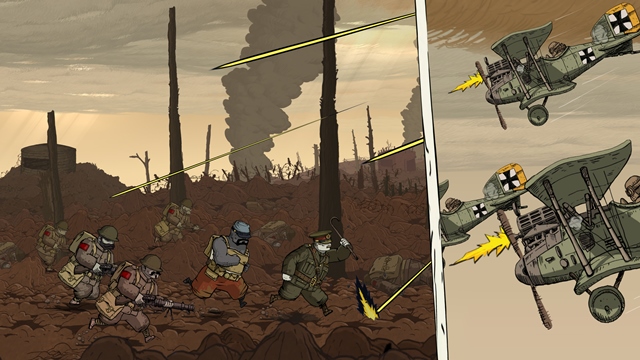 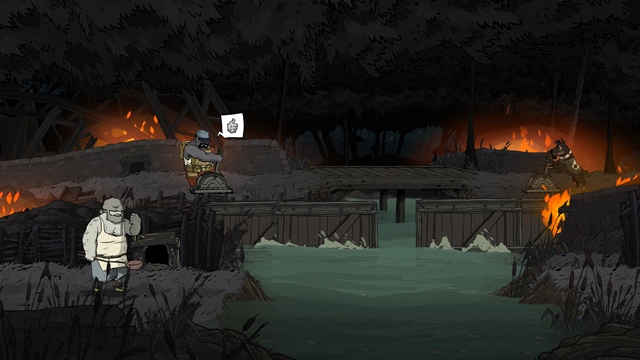 Depression — Valiant Hearts: The Great War is not a game that will make you feel good about playing the hero in some noble cause to defeat evil. Not even having a shiny medal pinned on one of the playable character’s chests will make you all that good about your actions. All war is horrific, but World War I was particularly so. Much of the war was a stalemate that none of the dozens of countries involved could break. Deadly new tools of destruction were available for the first time, and no one knew quite how to use them best or how to overcome an opponent wielding a similar arsenal.

Valiant Hearts has you experiencing the devastation through the eyes of a Belgian nurse, an American volunteer, a German soldier and a French one. Over the course of the game, each discovers that the fierce nationalistic pride and personal quests for vengeance that helped bring them to war aren’t all they’re cracked up to be when accompanied by chlorine gas, machine gun fire and carpet bombings. A family is torn apart and madness takes control of one character. There is no redemption to be found, only the pain and suffering Ubisoft will successfully make you feel before the end.

Sticks and stones — The Allied and Central Powers may have been armed to the teeth during WWI, but Ubisoft rarely puts that firepower in the hands of the player. Instead of storming across No Man’s Land exchanging rifle fire with entrenched enemies, you’re often tasked with activities like healing the wounded, dragging fellow combatants out of fires both figurative and literal, preparing a meal or digging through the dirt. Yes, there are occasions when you must drive a tank or fire artillery on enemy positions, but the worst of the war’s atrocities happen around you and to you, not because of you. Valiant Hearts is more an adventure game about people’s war-time experiences than it is a war game about killing people. There’s nothing wrong with developing a military shooter, but Valiant Hearts is a welcome change of pace.

Puppy love — Valiant Hearts‘ fifth playable character is one of its best. Yes, the time when putting a dog in a game could be considered a novel concept has long since passed. Thankfully Ubisoft Montpellier has instead given players a canine that’s an actual necessity, and one that’s fun to play as to boot. Many of the game’s puzzles are designed around the concept of one or two human characters solving them with the help of the dog, who can be sent to fetch items, throw switches, ride in baskets, pull people to safety and more. This allows for more complex puzzles and gives the human characters a cheerful companion to help them through the terrors around them.

A learning experience — When nearly an entire century goes by without movies, books or TV shows glorifying a war, people tend to forget what happened in it. Ubisoft Montpellier does an admirable job educating the player on the matter. Each new stretch of gameplay brings with it a few briefings on the history of WWI. The use of real photographs from the war pull players away from the game’s stylized graphics and illustrate what things were really like. Viewing this content is optional, but it’s difficult to imagine anyone enjoying Valiant Hearts and not wanting to learn more about its setting. 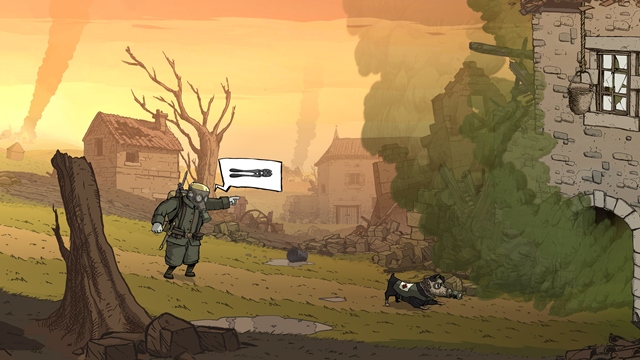 This is a game — Although it’s nice that little of the game is spent running around shooting at people, the puzzles-over-combat gameplay can be a double-edged sword. More than a few sections of gameplay either make little sense and/or are completely ridiculous. For example, there is a segment in which the German soldier Karl returns to the ranks after escaping from a French POW camp. His escape starts off sensibly enough, as you duck behind cover to avoid detection, but it enters Scooby-Doo territory when Karl is made to pick up a scarecrow and run with it, periodically planting it into the ground and hiding behind it. Later, Karl needs to get his uniform and gear back at the German barracks, but he has to rely on tricks and thievery to gather it all up. It makes no sense for the Germans to put one of their soldiers through this in order to get suited up and rejoin the war effort. But this is a video game, so Ubisoft is going to make you do video game things whether they make sense or not.

Is this dog magic? — You’re often dropped at or behind enemy lines in Valiant Hearts and need to avoid enemy detection when you are. You’ll lean heavily on the dog to help you out in these situations. Luckily for you, enemy troops are apparently completely unfazed by a dog carrying around sticks of dynamite, throwing switches and pulling people to safety. It’s game over when the adversarial soldiers see one of the human player-characters during these segments, but the dog can run right by them, solving puzzles and stealing things without anyone caring. On top of that, the dog magically teleports itself to your location when you climb up a ladder or otherwise leave it behind. It’s impossible not to notice this goofiness, and that’s a real shame. 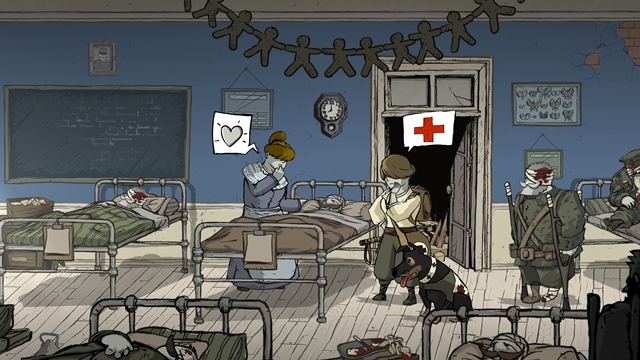 Like the war it’s set in, Valiant Hearts doesn’t always make sense. Its puzzles are at times illogical, but they remain fun, especially when the dog gets involved. Meanwhile, seeing the atrocities of dead, bloody bodies piled high can feel strange when contrasted against caricature Germans who swig beer and eat sausage and Frenchmen who suck down wine and baguettes. The playable characters, however, are immediately likable and relatable. You’ll want to experience their stories, and ultimately, you will feel their pain.