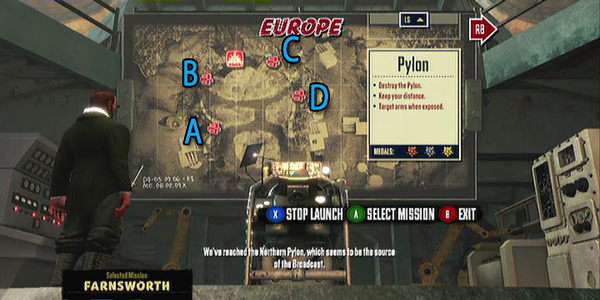 Goal: Defeat the Pylon within 40s.
Defeating Pylon in under 40s at-level (which is level 4 or so) is nearly impossible, especially solo. However, in the interest of simply surviving, many tactics can be employed.

Turtle: Setup shop in the back of the map with the Woodruff and dual snipers. Build a repair crane as quick as possible to keep yourself alive. Tier 1 and 2 can be taken care of safely from back here, just use Tripod legs with quickload to ensure each tier is dealt with swiftly. On tier 3, run up under the boss, there you’ll only have to worry about the Tubes as his energy-pults won’t hit you.

Mass Offensive: Dual artilleries, mid-field, quickload legs and the Karlsson Mk 1 will get the job done here. Ignore the Tubes unless the trench is about to die, and build a repair crane behind the trench. Fire away all day and don’t move. Be careful though, Tier 2’s inhale is magnetized, so all artillery shots will be dragged into the shield if not aimed carefully during that inhale.

The best way to do this is to come back later with bigger gear. Once you’ve got two Gungnirs, getting this boss in 40s is no problem. However, if your aim is to get this on the first try, you’ll need four players following the Mass Offensive strategy described above. Standard Artillery Cannons are recommended here, also purchasable in the shop at this point.