In the not-so-distant future, a company called Bradwell Electronics has taken the helm to help the world with a clean water initiative. In The Bradwell Conspiracy, you are playing a character visiting the Stonehenge museum. There is an explosion suddenly, and you wake up with damaged vocal cords. You cannot talk but can interact with a computer assistant program. Eventually, you meet another survivor (at least her voice), through a closed door. The two of you aim to get to safety, but because you cannot talk, you must take pictures and send them to her. It’s the only way you can really interact with Amber, who appears to be the only other human around. The game revolves around solving puzzles with sort of a 3D printing device. You absorb materials and discover blueprints, then create physical copies of what you’ve found. It’s a very original story that unravels as you progress. Secrets gradually become revealed and the truth may surprise you.

Intriguing Environment — I find the situation the protagonist wakes up to be quite intriguing. I’ve been to a lot of museums and was fascinated. There is no actual museum next to Stonehenge, but I’m now convinced there should be. There are numerous things to look at and read and it’s all connected to the monument as well as the company that is in control. It’s a cool-looking museum, but it’s also partially destroyed. This makes it exciting to explore. I walked around and read just about everything I could so I could soak in what was going on as well as get some information about the monument I really knew nothing about. It was educational and gave me an idea of what the future is like in this fantasy world. Beyond that are employee areas to explore and there are a lot of neat ways you must interact with the world to get to the next area. The progression is smooth, being just the right pace for getting to the next objective.

Story Development — You’re an unlikely piece to the puzzle. You are a civilian who happens to survive an accident and becomes a pawn in unraveling a mystery. Starting off with no clue on what’s going on, you begin to realize there is something amiss. Amber is a joy to help. She asks you to send her pictures of where you are and will respond in funny ways if you send random things unrelated. The progress of the story is steady and makes sense. It seems like just the right pacing. Not too slow, but moves at a momentum that allows you to soak in a realization of corruption.

Creative Puzzles — The phenomenon of 3D printing is extraordinary. It doesn’t even seem possible and has long been a sci-fi element. In this game, you collect blueprints and materials to make them. They are limited in what and how many objects you can create. A lot of the puzzle elements come from limitations and having to keep a healthy stock of material. Make a bridge, then after you cross, collect the plank you used. Besides needing to keep count, you also have to complete somewhat difficult puzzles. One, for example, is moving platforms around and setting up a stopper so that when it rotates, it gets stuck so you can continue on. The application of the 3D printer into creating your own solutions is all about imagination.

Difficult Item Placement — Controls are hard to get used to, and don’t seem very natural. Using the 3D printing device can be quite awkward at times. I was often pressing random buttons trying to use it. That could be just me, but I wasn’t a fan of the button layout. Placing the actual items proved troublesome. Creating a bridge, for example, was a lot of trial and error. You normally have to turn it sideways to make the item “green” which means it can be placed down. It’s a great concept but poorly executed. It needs a lot of adjustment and can almost ruin the experience for the impatient player.

Lack of Detail — Graphics aren’t bad, but they aren’t entirely good either. It seems like it could use a bit of a makeover. I tried the game on a smartphone and it looked identical. Also, items are used a bit too often. You will see many of the same colors on books and objects. Nothing really made me go “wow” except the initial scene in the beginning. From there, it became quite bland. This is all personal opinion. I do think it got a bit dark at times, which seemed to dampen the overall look. It’s not a horror game! While not impossible to see, it could have been lightened up a little bit.

The campaign was enjoyable with smooth story progression. Puzzles were clever though sometimes hard to pull off because of the awkward controls. The setting is awesome, who doesn’t like a chaotic explosion in a museum? With a unique setting as well as a cool 3D printing mechanism, I think this game is fine how it is, but could use a little improvement in controls and graphics. It seemed kind of blocky with little detail. Yet I did enjoy what I played and it was nothing short of unique, which made me like it. Though I wouldn’t play it a second time, I would love some DLC to be added.

The Bradwell Conspiracy was published by Bossa Studios Ltd and developed by A Brave Plan on Xbox One. It was released on October 11, 2019, for $19.99. A copy was provided for review purposes. 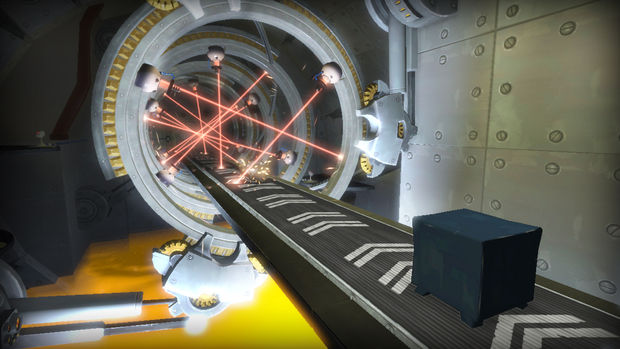