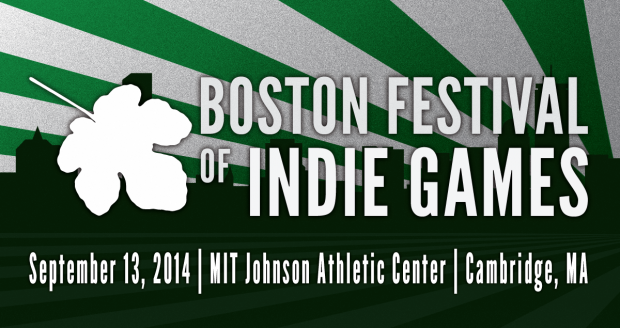 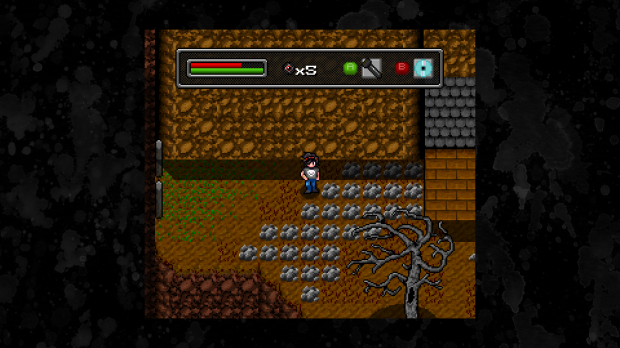 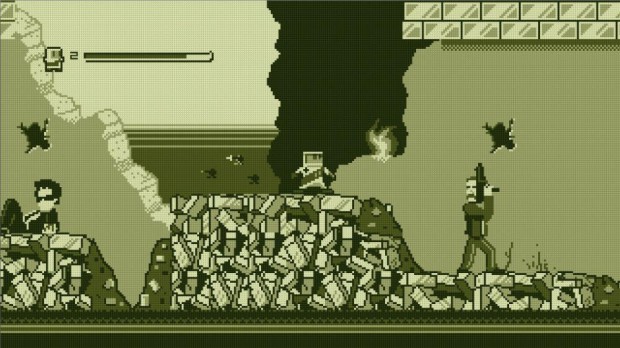 The original Rad Raygun started on Xbox Live Indie Games, but now it’s coming to XBLA in a “Super” sequel with new abilities, upgrades, levels and 80’s pop culture references. Rad, the protagonist, is a science experiment gone wrong, leaving him half-man, half-Game Boy. Now he must save the decade by killing all of the communist robots. Obviously.

Super Rad Raygun is designed like an actual 1980s game. Rad controls like Mega Man, and the monochromatic graphics intentionally replicate the original Game Boy’s. However, it also makes fun of the 80’s in our modern 20/20 hindsight. There’s a boss named Mad Donna, upgrades come from battery pickups and the world map labels the USA as “‘Murica.” It feels like one of your long-forgotten games that was too precious to let go of but surprises you with outdated—yet endearing—tropes.

“This is an homage to my childhood,” lead programmer Chris Bryant reminisced. “Growing up, all I wanted to do was make video games. So once I finally got the skill set to do it, I was going to make the kinds of games I grew up with.” 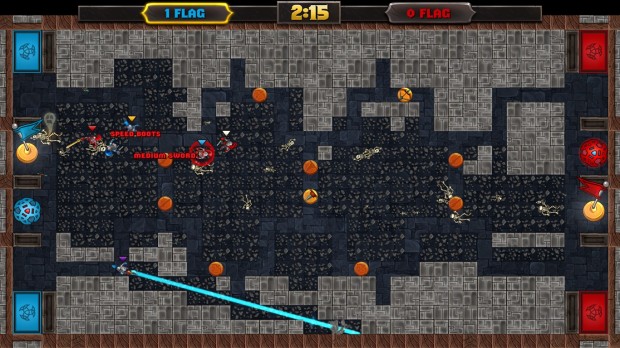 Canadian studio Chainsawesome Games conceptualized Knight Squad at a game jam with one simple concept: crazy multiplayer with eight local players. Knight Squad features nine different competitive game types that turn simple movement and attacking into a ridiculous scramble. I played soccer with strangers and somehow managed to score only one goal. It’s just like real soccer…when real soccer is played with swords, bows and fireballs. Other multiplayer modes include deathmatch, king of the hill and capture the flag. A cooperative campaign mode is also planned with missions and upgrades for four players to fight through.

And yes, that is eight local players. Knight Squad takes advantage of the Xbox One’s capability to use up to eight controllers simultaneously. But if you don’t have that many controllers around, you can still play online.

Knight Squad is aiming for release on Xbox One by the end of February or early March 2015. 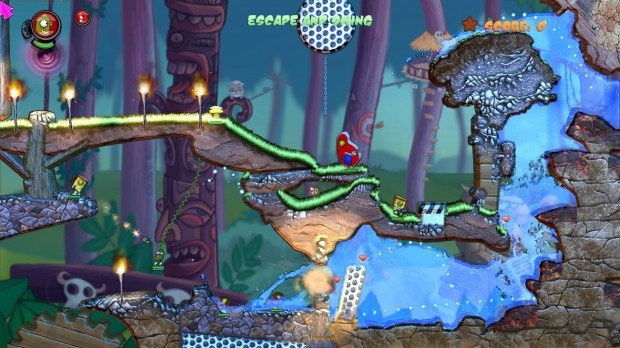 Physics-based puzzle-platformer Organic Panic has been in development for over six years because it uses a homemade physics engine (not Havok). Thanks to that painstaking perfectionism, Organic Panic is not your typical platformer. The type of terrain you walk on in its obstacle courses is just as important as its placement, because terrain types can only be manipulated in certain ways. The varying mix of placement and properties opens up multiple solutions to each level. There is no wrong approach, but many right ones.

Meat and Cheese have declared war against the Organics in their quest for world domination, so Cherry, Kiwi, Carrot and Coconut must push back. Each character comes with different abilities tied to their element. For example, Cherry’s element is Earth, so she can shoot whatever surface she has touched last. If she shoots a more dense material at a less dense material (like metal at wood) she can cut through it to make a new path. Be careful where you shoot, though — one moment I was merrily digging, and the next thing I knew everything came crashing down on top of me.

Two-dimensional terrain destruction has been around for a long time in games like Worms and Lemmings, but seeing pieces naturally fall and interact brings the goofy scene to life. You have to exploit the terrain to get through the terrain, and the combination of abilities, enemies and placement requires creative thinking. Other characters drastically change the way the game is played, too. For example, Coconut controls Gravity, so he can manipulate the level and shift where things are. When these character abilities are mixed into co-op mode, it makes for many possible solutions in an impressively open game.

Organic Panic will come to Xbox One and Xbox 360 “soon.” 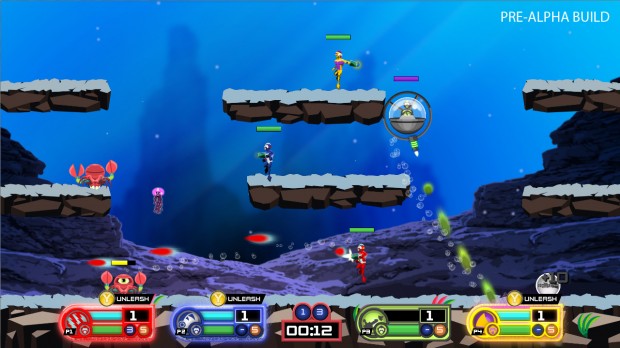 This arcade-style co-op game throws you and three other divers into an ocean of angry sea creatures. The simple premise is to get through alive while racking up points with power-ups. Think the underwater levels of the original Mario games, but you’re packing more heat than fire flowers.

In Swimsanity, the hectic screen quickly fills up with angry animals. I saw dolphin swarms, puffer fish bombs and at one point the swimmers were chased by some kind of rabid whale. Expect the unexpected.

Swimsanity is confirmed for Xbox platforms and should come in early 2015.

Speed and combat, combat and speed. Blood Alloy is all about fluid, powerful motion to counter intense swarms of enemies. You’re given a big gun, a bigger sword and the jet pack of your wildest dreams. Blood Alloy bombards you with enemies while empowering you with the speed and power to fight back. It’s high offense versus high offense.

With the jet pack you can boost in any direction to dodge, retreat and advance. If you boost across a surface, you will go faster and farther. When I boosted from a crouch, the character dropped to her knees and slid across the ground. You can even boost up walls and across ceilings. Dance around the swarms, unleash your attacks smartly, and you can survive the onslaught without a scratch.

Lead Designer Frank Washburn wants to turn Blood Alloy into a Metroidvania-style adventure. “The one thing that’s going to be hard, especially in a Metroidvania context, is the balance of ‘I want to keep going fast,’ but balance that with slow exploration.” If you like games that are faster than fast-paced, this is definitely one to keep an eye on.

Blood Alloy is planned for Xbox One and “hopefully” XBLA sometime next year. 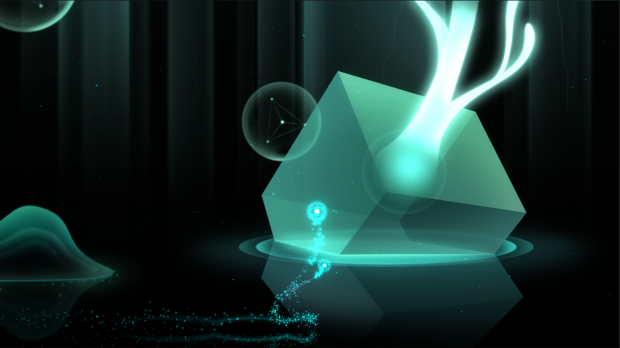 I knew before seeing Gemini that it would be something different, but I didn’t realize just how different it would be. Lead developer Atlas Chen deeply cares for the artistic experiences that are only possible in games, and he believes those experiences should speak for themselves. As we talked, one onlooker asked Chen, “What is the objective? What do you do?”

Respectfully, Chen replied, “You should play the game and find out.”

In the middle of a hot, muggy convention floor after hours of walking and talking, Gemini took my breath away with its elegance. You are a star exploring in tandem with another star that leads and follows you. With zero dialogue, Gemini creates a bond that feels vastly deeper and more intimate than most developers with higher budgets attempt to design. For me, Gemini beautifully illustrates our closest relationships and how they reflect ourselves. Your interpretation may differ, and that’s OK.

This one is still in the dark as far as a console release, but I made a point to tell Microsoft in person not to miss this gem. Keep an eye on Gemini. 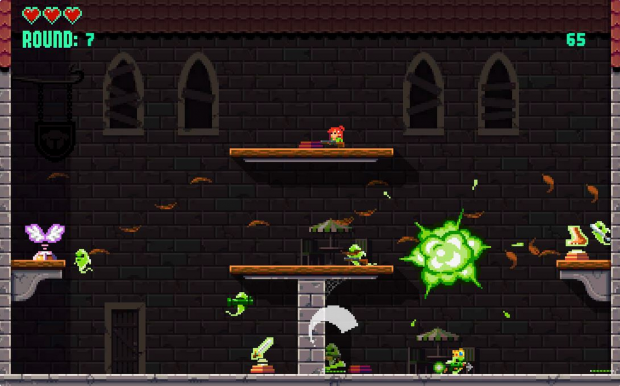 A small booth in the corner of Boston FIG had two demo stations and a small crowd. I was handed a controller and told, “Grab a weapon and kill the chair.” The possessed chair was frantically scrambling up weapons and attacking me. I picked up a sword and killed the chair. Everything reset, except now there was a ghost instead of a chair. “The ghost will repeat what you just did. Grab another weapon and kill the ghost.” This time I grabbed a rocket launcher and blew up my ghost. Everything reset again. “Now you have two ghosts repeating what you did each time.” And so on.

Eventually, I had more than seven ghosts repeating my actions simultaneously, but it looked like they were attacking each other. If their paths happen to intersect, they actually can kill each other. Once a lot accumulate, you can pick up the “Extreme Exorcism” attack that erases however many ghosts it can catch. But still, the game continues in a loop. Extreme Exorcism has a simple concept that goes a long way. Who needs artificial intelligence when you can recycle your own?

Extreme Exorcism is planned for Xbox One, but we don’t know when yet. 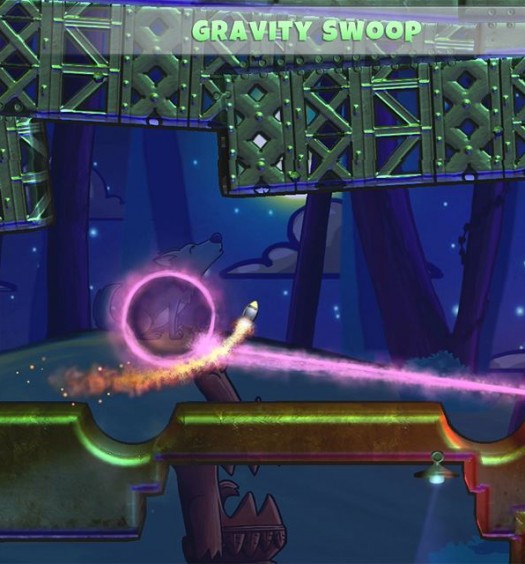