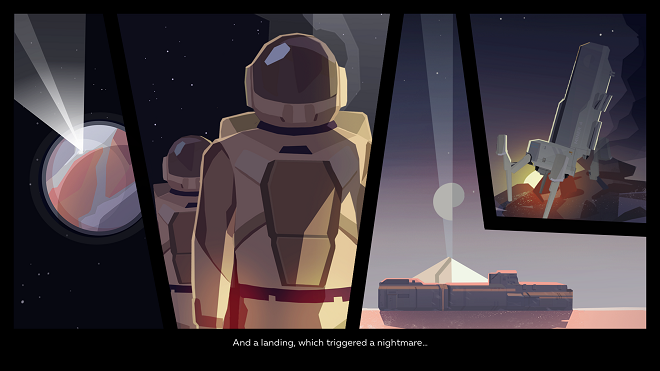 Space: the final frontier. Most space-based science fiction deals with the desire to explore the unknown. However, a handful of works feature more reluctant space explorers. For example, the first act of the original Alien illustrated how the crew of the freighter Nostromo were practically forced to investigate LV-426 and eventually discover the creature that just wanted to give John Hurt a big warm hug (in the face). With Symmetry, developers at Sleepless Clinic have taken a similar approach, stranding a diverse crew on an unforgiving planet where all is not what it seems.

Symmetry almost completely removes the jump-scares and gore from the Alien formula, choosing instead to focus more on the claustrophobia and the occasionally-divergent motives of the crew. In place of the terror, players have to ensure the survival of the crew through adept marshaling of resources and skills, and, if it comes to it, making some rather harsh choices. 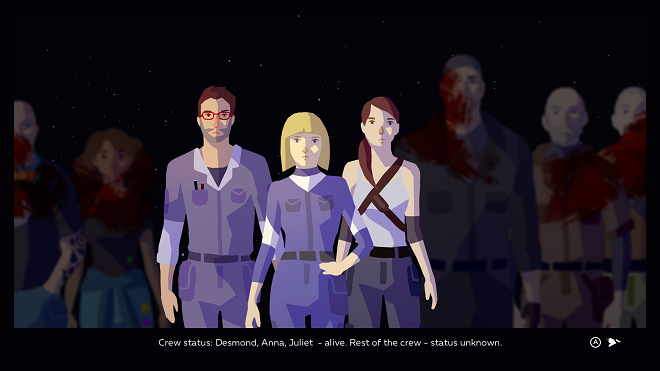 Random – The key to the survival genre is making do with what you’re given. When you start your Symmetry campaign, you’re given three randomly-selected members of the eight-person crew. Each person has a different skill set covering an initial range of three forms of resource production. To survive the first couple of in-game days, you’ll need to assign tasks based on their proficiency in each skill. Fortunately, when things are slower, you’ll have time to improve the skills of your team, and even learn new skills, thus making them more effective at their respective tasks. Similarly, the characters each have their own backstories and motives so that each play-through will have some different story elements. Most likely, you’ll have a number of initial play-throughs, as we’ll examine later.

Style – From an audio/visual perspective, the game works well. The color palette is dull and wintry, to fit the frigid nature of the planet. Our characters are flat 2D sprites that are hand-drawn and a bit more colorful, making them easy to pick out. Game data is relayed through simple icons that take a few moments to figure out but are logically designed. There’s not much music, but what is there sets the mood appropriately. 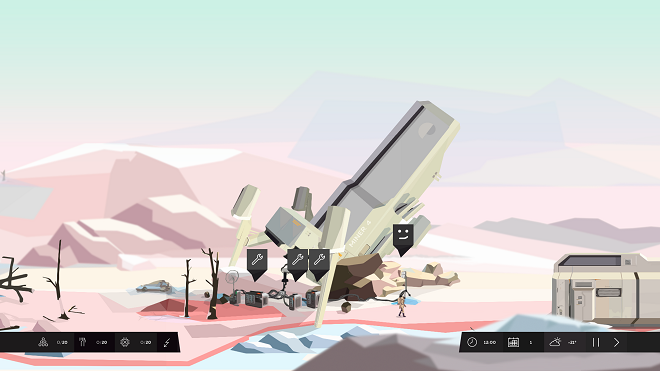 Vague tutorial – The modern way to introduce players to the game is through the interactive tutorial, walking users through the basics while also starting up the game’s story. Unfortunately, this component is rather lacking. Key concepts are introduced broadly, without much indication for exactly how (and when) to deal with them. So, the end result is that you’ll start the game, something bad will happen, and you’ll choose to start over (overall, a wise move). But, as noted earlier, you’ll most likely wind up with a new set of characters and a changing narrative.

Vague progression – After you finally get the hang of how the game works, you hopefully will find a rhythm of how to keep your characters alive and your shelter functional. That’s all fine and good… but then what? There is no indication that you’re making any progress in advancing the story, and when something does occur, it’s not always clear precisely what just happened and what your next move should be. It seems best to keep surviving, and things simply will reveal themselves in due time, which makes for a rather frustrating adventure.

Not-so-vague glitches – During my review, I had at least two instances where something weird occurred, and characters disappeared or were unable to be changed from their current tasks. The other main tell was the game clock changed from showing a 24-hour format clock to showing over -600 hours. Again, all you can do is shut down the game and start anew, with no guarantee that it won’t happen another time. Considering the nature of the game, I was wondering if we were seeing something out of Eternal Darkness, where the game would make it look like your game progress was lost due to a failure of some sort. However, I’ve seen no evidence that this is anything more than broken. Making matters worse is having just ONE game save slot per player.

For most games, there’s a reason you’re doing what you’re doing. Even Pac-Man had his purpose, for crying out loud. Unfortunately, Symmetry doesn’t make itself clear fast enough to keep someone playing in the long term. The collection of resources becomes grindy as you try to last long enough for the game to tell you the next story point, with no indication of how or when that next story point will occur, or what you need to do differently (if anything). There’s a lot of potential here, and I’m trying to see it, but I guess this face-hugger is in the way.

Symmetry was developed by Sleepless Clinic and published by IMGN.PRO. It was released on February 23, 2018, for $17.99. A review copy of the game was provided. Read More
The Flame in the Flood review: Rollin’ on the river
Top