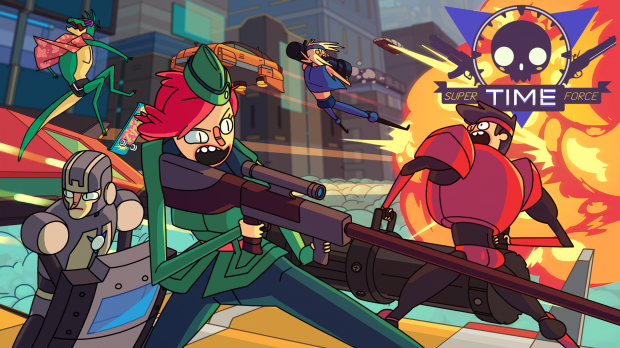 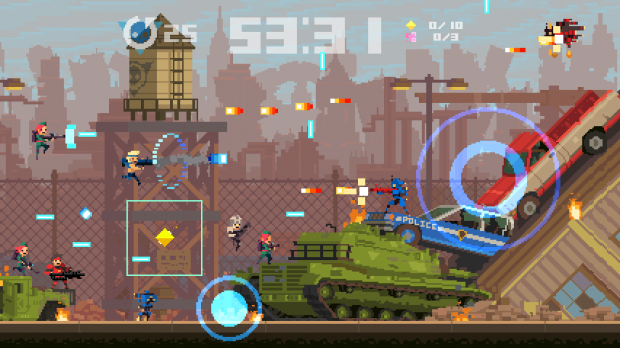 A genuinely unique way to play – Of course, the most important — and arguably most fun — aspect of playing Super Time Force is without a doubt the time-bending mechanic. The system just works, with level design that mostly provides just the right level of challenge despite what might appear to be a rather unbalanced perk. Time Force is certainly no pushover, but at the same time every level except the very last can be completed by a shooter novice using only the blunt force provided by multiple runs using the core few characters. More experienced players and completionists however will love the challenge of replaying levels with some of the whackier characters, or in searching for every last collectible.

Authentic feel – Despite a certain amount of spit and polish and a mercifully solid framerate, Capy’s shooter is immediately recognisable as a classic 2D shooter in the same mould as iconic examples like Contra and Metal Slug. Capybara has created a game that is both visually and aurally delightful, with deep, chunky, pixellated cityscapes, jungles, caverns, castles and more. Each landscape rolls along perfectly beside a light and cheerful theme tune, the only distraction being the layers and layers of explosions and gunshots that fold in as the timeouts mount up.

Love you long time – Most importantly of all, Super Time Force is a game that offers extremely challenging gameplay over seven multi-stage levels but still manages to remain fun throughout. It has a light, amusing style that permeates its design, gameplay and mechanics and ultimately keeps players coming back for another attempt. Once you’ve completed the game once, not only can you retry levels with a completely new mix of characters, but you will also unlock a new hardcore mode, in which every life becomes exponentially more valuable and forces the kind of perfect run which die hard shooter enthusiasts will love. 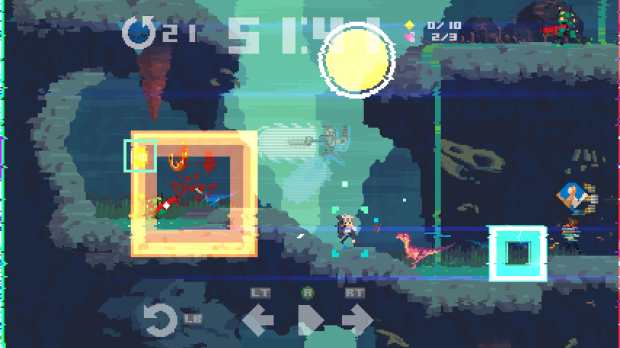 Samey bosses – The mix of levels and characters in Capy’s shooter mostly offers a huge amount of variety and scope for different play styles. Unfortunately, most of the bosses boil down to one thing: spamming the attack button until either death or timeout, then repeating with more and more characters until the boss is dead. Although it isn’t surprising to see that the main mechanic becomes key for boss encounters, it seems a shame that there is relatively little in terms of smart interplay between characters or scope for amazing single-life runs.

Balancing act – Super Time Force is generally a well-balanced game that allows novices to feel good about themselves for making progress, and it offers experienced players the chance to show off. However, it features one major difficulty spike towards the end that is pad-smashingly frustrating. It’s a minor concern, however, especially in a genre that prides itself on being so tough that only the strongest survive until anywhere near the end. 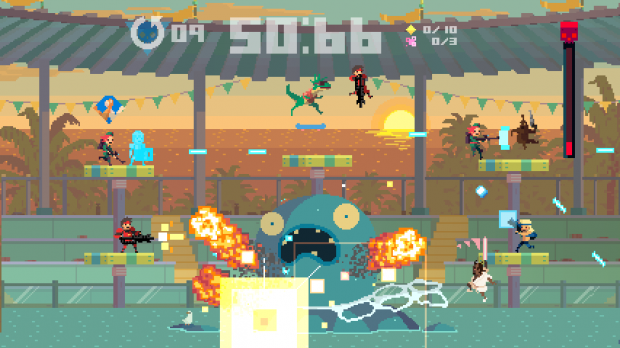 In a nutshell, you owe it to yourself to try Super Time Force, because it really is a very good game. If you’re a fan of 2D shooters in general, then you will be delighted to know that Capy has created something that is true to the heritage of the genre, but that also offers something genuinely new. For anyone else, this is still a polished game that has been lavished with the love and attention of a design team that really cares.