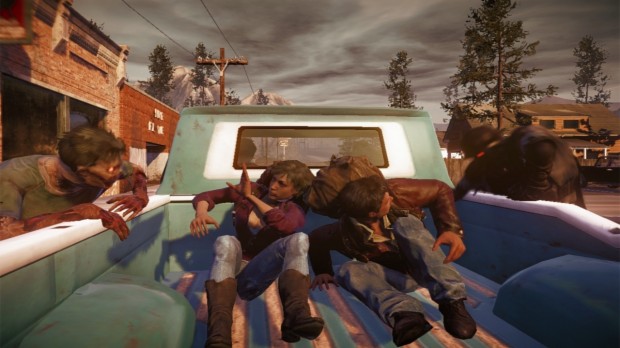 The latest XBLA darling, State of Decay, received its third title update yesterday, across all servers and regions. Undead Labs, developers for this zombie-survival open world game, thinks they have addressed the freezing issues associated with a community bug. For most survivalists, this title update will not require gamers to restart their campaign. For those with large communities and whom are relatively early on in the game, then there is a chance that those gamers will have to restart their campaign. Hit the jump to see what the update contains.

– You can now ask a community NPC to follow you and watch your back. Followers can also accompany you on most non-storyline missions.
– NPCs who have been told to leave your community no longer remain in your Journal and take up bed space.
– Jacob can no longer be selected for a “Mercy Shot” mission before he gives you the “Home Away from Home” mission.
– You can now train members of another Enclave in your Dojo immediately upon construction of the Dojo.

– Fixed Snyder Warehouse not repairing vehicles.
– Fixed community NPCs sometimes blocking the door to Snyder Warehouse.
– You can no longer move to a Home site that supports fewer Outposts than you currently control.
– Vehicles are no longer teleported to Home parking spaces at 6:00 AM.

– Outposts are now numbered on the map.
– Added Journal log entry for establishing an Outpost.
– Outpost bonuses to Stockpiles are now retained when the game is restarted.

– Added Journal log entries for “Memento” mission.
– Changed AI to ensure zombies are present when you get a training mission or a morale mission.
– You are now reminded every 15 minutes, starting at 30 minutes, that your progress is not being saved while in a mission.
– Fixed bug that allowed save spinner to sometimes display during missions.
– Additional polish to “The Law” mission.