Seizonrenda was developed by Inland Studios. It was released October 30, 2010 and retails for 80 MSP. A copy of the game was provided for review purposes. 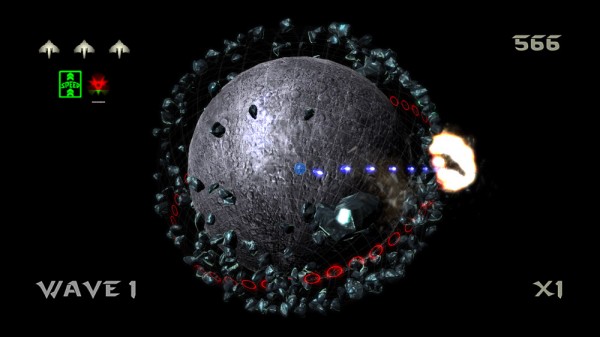 Seizonrenda is a twin stick shooter taking place on a barren moon. The goal of the game is to survive and score points. Waves of floating asteroids and sentient enemies continually fall to the moon in increasingly complex patterns. The action is fast and gets complicated quickly as more and more enemies pile onto the screen.

Geometry Wars + Asteroids = Seizonrenda – The gameplay in Seizonrenda is strikingly similar to Geometry Wars–even several of the enemies look and behave very similarly. The only real addition is the floating asteroids which feature so prominently. Make no mistake, this game controls every bit as precisely and plays every bit as quickly as its forebears. While not as visually stimulating as Geometry Wars it certainly plays just as well and actually adds a few twists.

Spherical playing field – Most twin stick shooters trap you in a rectangular box. Seizonrenda has an interesting solution to this though. The playing field is spherical. In this way you traverse the moon and are free to go up, down, left, or right for as long as you want. This frees gameplay up a great deal and saves you from getting trapped in a corner. It is also a neat effect to watch your bullets arch around the moon itself.

Red warnings – With asteroids literally crashing down directly on top of you destruction is a real threat. Fortunately red circles will populate the playing field indicating wherever danger is about to be. 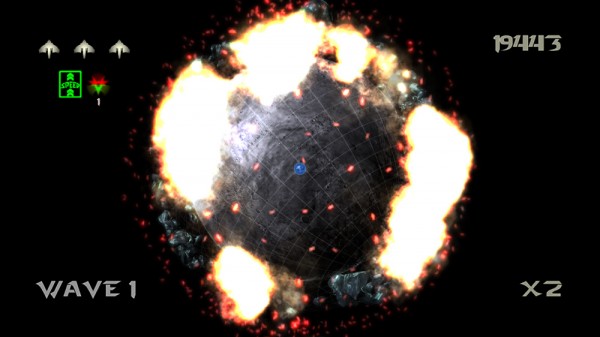 Graphics occasionally too dark – The playing field is generally grey. The asteroids that populate the playing field are dark grey or black. There were several occasions where it was too difficult to distinguish them in a hectic situation and resulted in unnecessary deaths.

Dash gets you killed – The main gun is usually enough to get you out of trouble. But when you are completely surrounded the bomb will save you but net you no points. The other option is to use the dash. But this proves completely useless because it almost always dashes you into a worse situation than you were in before. In truth this often led to instant deaths the moment the invincibility wore off. Seizonrenda is a generally polished game so it is a strange for something so out of place to be left in.

Uninteresting scoring system – The gameplay is solid but the scoring is boring. There are any number of established scoring mechanics that could have been added that would have tremendously spiced up the game. It’s a shame that the scoring system implemented is virtually non-existent.

Ultimately Seizonrenda is a very effective twin stick shooter but really doesn’t do anything special to differentiate itself. It is only 80 MSP so it is well worth the price of admission. Still, most folks will have already experienced everything this game has to offer somewhere else. Twin stick fans should certainly give it a look and others will definitely enjoy it if they haven’t burnt out on the genre.