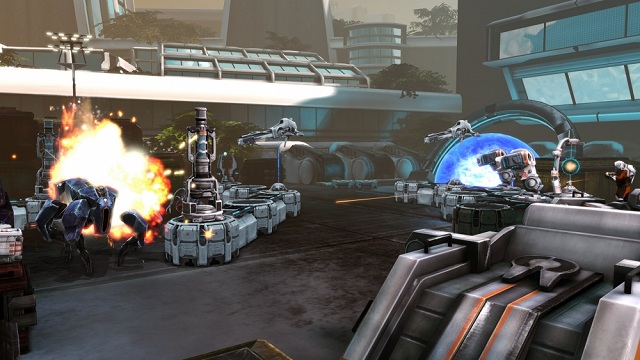 Sanctum 2: beauty and the beasts 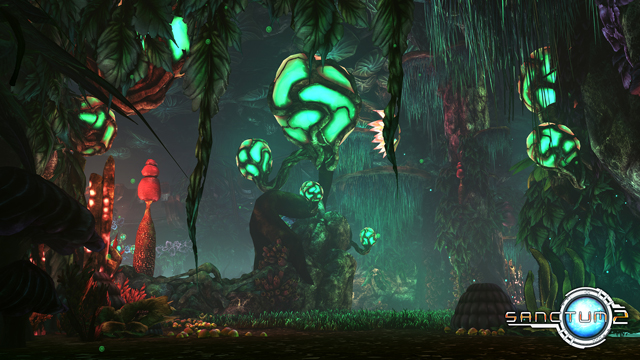 “To take what everybody loved about Sanctum and elevate it,” Reverb Publishing’s Ted Lange says, speaking to the motivation behind Coffee Stain Studios’ upcoming sequel. Lange is leaning comfortably in his chair, discussing Sanctum 2 with XBLAFans in a small white room on the second floor of a San Francisco gallery. As point man for the game, you would expect a flurry of information and glossy rhetoric about the many wonderful things that are in store. But Lange exhibits a calm enthusiasm, content to let the game speak for itself — which says quite a bit.

The original Sanctum released exclusively for PC and Mac markets, garnering praise for its innovative concoction of methodical tower defense and furious FPS elements and selling notably well for an independent venture. Though there were criticisms. Sanctum shipped with only three maps and a similarly restricted number of weapons. There were no connecting threads between each of the maps or explanations for these vibrantly glowing aliens in the first place. Who was this spunky redhead with an arsenal of future-tech? Why must she single-handedly stem the onslaught?

Sanctum felt like a fantastic but rushed idea – a proof of concept shipped a tad too early for its own good. As Lange boots up the demo and offers the controller, we discuss those arguable missteps and what that means for bringing Sanctum 2 to Xbox Live Arcade.

“I think that’s why they sat back and kind of wanted to take the time to do it right,” Lange says. “They took a lot of feedback from the consumer base of Sanctum, what stuff they wanted to see. It was definitely a thought-out process on delivering the best game that they possibly could.”

It would seem the consumer feedback has been well-received. Sanctum 2 connects the previously disjointed map structure through a loose plot that evolves with every level. “Throughout the whole campaign there’s a comic book-style narrative that kind of guides you through,” Lange explains. “So it puts a little more background story to the series.”

That narrative revolves around Skye – the fiery protagonist from the first game – who appears a bit battered since she last defended hearth and home, though this time she’s not alone. A supporting cast of playable characters helps to fill out the ranks, each with his or her own special talents.

The four playable Core Guardians now utilize default weapons and unique characteristics. Skye’s a versatile all-around defender, working the assault rifle with a double-jump ability. Sweet Autumn, the teenage demolitions expert hoists a dual-purpose rocket launcher while the shotgun-blasting Haigen is better suited to close quarters. The most mysterious of the bunch, the robotic sharpshooter Simo, packs the workhorse of the original game, the sniper rifle, and benefits from better accuracy.

Though default weapons and traits are locked to a character, players can still outfit their remaining item slots with whatever they choose, further augmenting their play through the addition of perks. “When you first start out you can only select one perk,” Lange explains. “But as you level up in the game you’ll get more perks and more selectable towers.”

Perks add another layer of customization, providing dynamic assistance where you need it most. One perk transforms your ammunition into high-explosive projectiles, while another doesn’t impact you at all but laces the core with a protective barrier. “It automatically does 750 damage to anything that reaches the core,” professes Lange, who is either unable or unwilling to hide his fondness for this particular effect. “Especially the little guys, because they’ll run right by and just get taken out.” 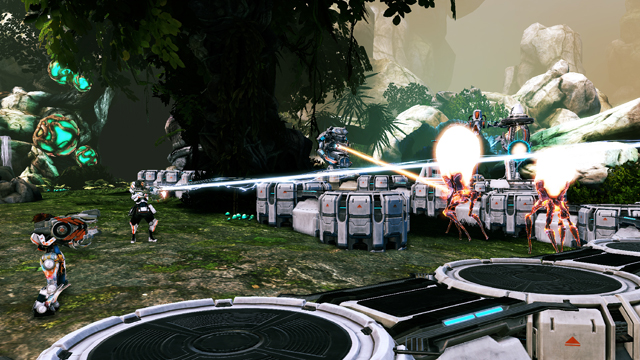 The steady stream of unlockable rewards harks back to Coffee Stain Studios’ effort to source its audience for ways to improve upon the original game. Although players were able to select their weapons and turrets for each level, there was no sense of progression since everything was immediately available. As the Swedish developer wrote on its blog, “It should be rewarding to play a game. By adding a nice progression system we also hope that Sanctum 2 can appeal towards a wider audience.”

Your characters aren’t the only aspect this newly implemented sense of progression will influence. As the story develops and each level unfolds, the difficulty and complexity will gradually increase. “There are four different worlds and each world has four different levels,” Lange explains. “It ramps you up. The introduction just gives you basic training so it shows you how to fire, how to jump, how to place towers. Though once you get to The Gate [level], it’s more of what you remember with Sanctum.”

In other words, the trademark brutal difficulty that Sanctum employed. The original game had a tendency to spike without warning, spewing unconquerable masses of bioluminescent creatures that would leave you scratching your head as to how to handle such a blitzkrieg. From what Lange says, that challenge hasn’t gone anywhere, but the learning curve is much more gradual this time around. “They spent a lot of time trying to keep it hardcore, because that’s what it is, but let people not actually get their asses kicked in the beginning.”

Rather than simply spit out more minions with more health and less resources, Coffee Stain has taken steps to create new mechanics to test your mettle with more variety. Sanctum already offered a diverse bestiary of glowing creatures, though this time around the studio has brought out the big guns. “One of the first big bosses you encounter – I believe on the fourth level – you start setting up all your towers and all your paths, and he has the ability just to smash your towers,” Lange warns with subtle laughter. “When you first face him it’s a little shocking. You have this whole path set up and you’re like, ‘Oh this is perfect,’ and he just starts plowing right through it.” 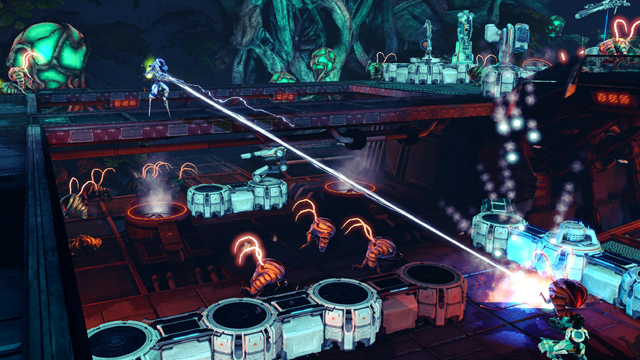 To top it off, boss encounters automatically begin after a set amount of time, requiring you to think and prepare quickly for the coming storm. “When they’re introducing a new kind of bigger enemy, they’ll do a 90-second wave timer. But most waves aren’t timed,” Lange explains. He’s quick to clarify that you’ll meet many new creatures throughout the campaign, not just benchmark bruisers. “There’s a ton of new enemies. As you progress through the game you’re constantly seeing new ones.”

Managing the many creatures en route to your core has been overhauled. While in the past monsters were one-track-minded — always hauling full-bore toward the objective with little care for you or your efforts — that’s no longer the case. “They built in a full-on aggro system,” Lange instructs us on the finer points of monster-kiting. “If they’re at the core and you start doing a lot of damage and walk away, you can guide them away from the core, which is really nice.”

Just about the only thing that hasn’t changed in the transition from Sanctum to its sequel is the distinct look of the world. Sanctum 2 is breathtakingly gorgeous and it’s a pity that the frantic pace of the gameplay doesn’t lend itself to admiring the unique creatures and scenery powered by Unreal Engine 3. “They spent a lot of time really polishing it,” Lange explains. “All the textures are really so smooth and they spent a lot of time on lighting and shadows.” He’s right, of course, from our brief time with the game we couldn’t help but admire the aesthetic. The lush greenery clashes with the white sterility of manmade construction, and it’s hard to deny that the Sanctum series has ever looked anything other than provocative.

The only portion of the upcoming title that we weren’t able to preview was the obvious inclusion of multiplayer. Remembering that each character has their specific strengths and function it’s clear Coffee Stain Studios envisions a squad of core defenders working in unison. “With the 4-player co-op, everybody can work together,” Lange confirms. “Where if one person selects Simo he can stand back and use the sniper rifle while other people actually set up more towers and you can better manage your resources.” It seems a promising addition and a no-brainer for an Xbox Live Arcade title.

Coffee Stain and Reverb have also outlined a plan for post-release support, preemptively ensuring the concerns over a lack of content in the original title aren’t echoed through Sanctum 2. “There’s already planned DLC. We’re basically going to be building four big packs to really expand upon the game, almost making it a full new campaign,” Lange teases. “It’s also going to be offered — similar to what you’re seeing a lot nowadays — where you can buy a season pass and just get them all upfront. Any game you know you’re going to be investing time into you might as well.” 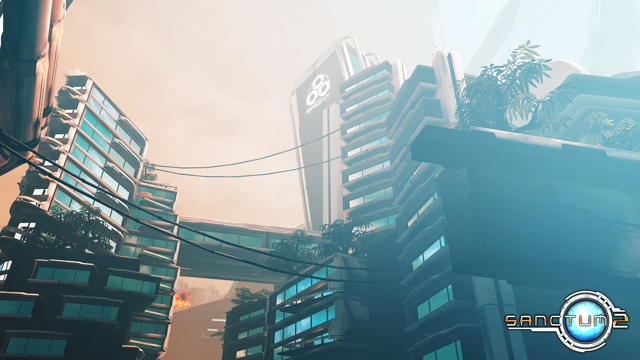 While we can’t say for sure how much time we’ll be investing in the next entry of the Sanctum series just yet, we walked away convinced you could do much, much worse than what Coffee Stain is cooking up. When Sanctum released it carried that ambiguous look and feel of an Xbox Live Arcade title, and we’re excited to see the next chapter land on XBLA where it belongs.

When can we expect that to happen? “Right now we’re saying spring; so coming very soon. It’s looking really polished and we’re really just fine-tuning stuff. Difficulty scaling and different things like that to make sure that the offering is what they wanted to do and what we wanted to do,” Lange reveals. As he said, “To take what everybody loved about Sanctum and elevate it.”