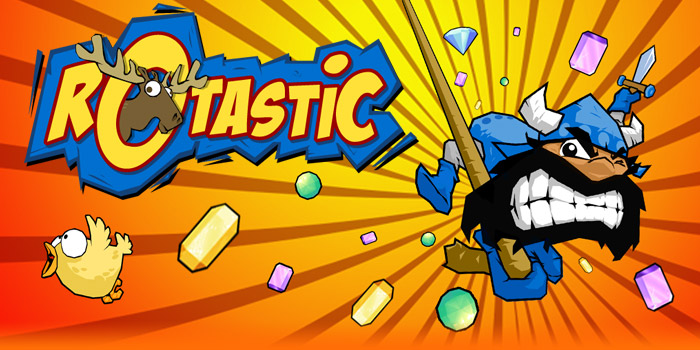 Rotastic was developed by Dancing Dots and published by Focus Home Interactive. It was released September 21, 2011 for 800 MSP. A copy was provided for review purposes. 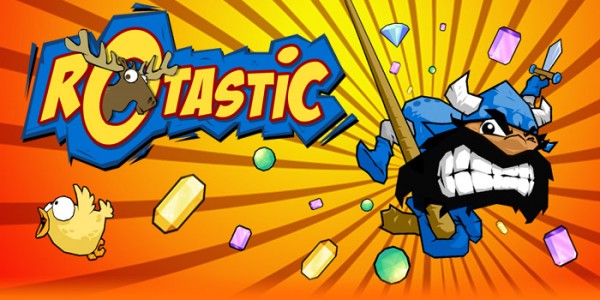 Action-puzzler Rotastic has been teasing us for a while with hilarious pictures and a steady stream of multiplayer info. The only controls in the game are the A button and the bumpers, which are just enough to let you grab on to pivots and change the direction you’re spinning. Armed with this knowledge, you’ll take to the skies to gather up crystals, evade monsters, battle enemies, flick switches, explode birds, and collect helmets made of progressively more expensive rocks. So what did we think after completing the 60-some levels and playing a bunch of the multiplayer? Read on! 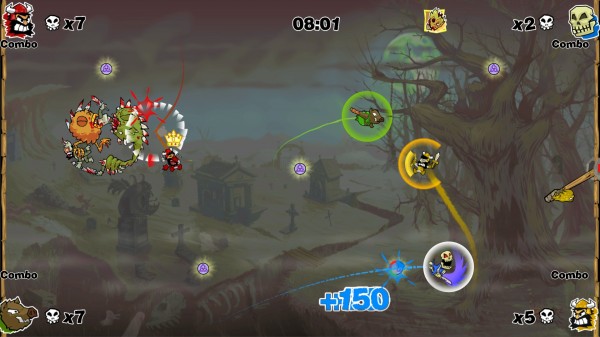 Addictive – As you’ll see later, we found parts of the game frustrating and parts of the game slow, but make no mistake – this game is addictive. It’s not quite up there with some of the heavy hitters, but you’ll definitely find yourself saying “OK… just one more level” or playing the same level over and over to try to make up that last few hundred points between your score and the diamond helm. It was quite easy to get sucked into the game for hours at a time.

Progression – The scoring system in Rotastic grades you on time, tricks, lives lost, and gems collected. Depending on your score, you’ll receive a copper, silver, gold, or diamond helmet. There are seven worlds in Rotastic, and each one takes a greater and greater number of total helmets to unlock. Normally this can be kind of annoying, but the required number of helmets was perfect. It encourages you to go back and replay the earlier levels without being an anger-inducing pain to obtain.

Multiplayer – The multiplayer is a swingin’ good time. Terrible jokes aside, flying across the screen just in time to cut off your frantic opponent before they can save themselves is incredibly satisfying. If you can’t round up three other friends to play with you, the game added the ability to include bots. There are two different game types (jewel collecting and kill-based) and a number of levels for each type, giving the multiplayer mode a surprising amount of death.

Humor – Rotastic did a great job looking around at the gaming industry both past and present and inserting some fun references. There’s a multiplayer level called Angry Birds where hitting a trigger releases a couple of birds that fly around knocking everyone off the screen. There are puns aplenty. One of the characters is an egotistical elf named Legalos. OK, it’s kind of cheesy, but in the best possible way. 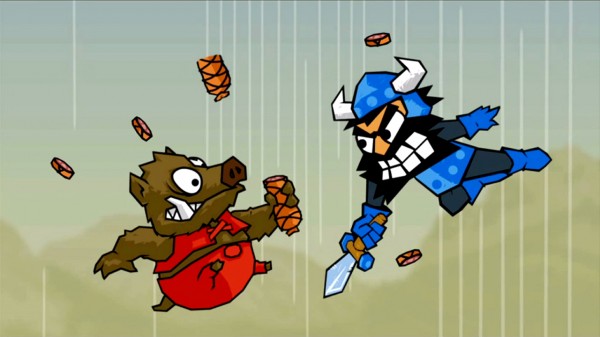 Repetitious voice acting – The 300th time you hear “Please don’t forget… THIS IS ARTISTIC!” you will know what we mean. They would have been better off not having voices in the game than having them repeat the same few lines over and over.

Difficulty swings – The beginning of Rotastic was so easy it was hard to get into. Once you get to the fifth or sixth world, it gets so difficult you’ll want to stop playing. Even within the same world there will be levels that are almost impossible to not get a platinum on surrounded by levels that are just impossible. Instead of a gradual progression encouraging mastery of the game it just got frustrating towards the end.

Cheap deaths – This is the main reason the end got frustrating. As more and more tools of death and destruction begin getting piled up all over the screen, the likelihood that you will be unfairly jettisoned into a corner that you cannot escape from at the end of a 5:00+ minute level increases exponentially. For example: in the middle of the seventh world there is an excellent level. The kind of level you’ll want to fire up the ol’ Xbox to show all of your friends the next time they all come over for whatever it is you kids do these days. It’s essentially a string of references to classic games, from Pacman to Zelda, and it is awesome. However, there’s a Tetris portion that goes from the top to the bottom of the screen over and over, and if you die you will be forced to watch as you respawn and instantly get dragged off the map with no hope for survival until all of your lives are gone.

No online multiplayer – We’ve already sung our praises of Rotastic‘s multiplayer. It’s the perfect thing to fire up for a couple of quick, intense matches before switching over to campaign or another game, which makes it completely befuddling as to why there is no online multiplayer. The lack of online multiplayer cuts the shelf-life of this game right in half. Luckily the developers included leaderboards, which help the replayability some as you try to best your friends’ scores on each level. Even these aren’t great though, as they take forever to scroll through and seem to have trouble loading sometimes. 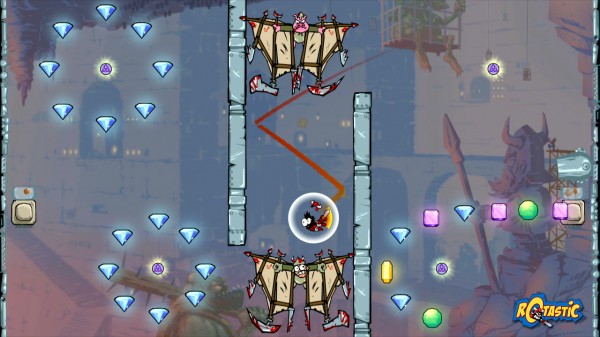 All in all, Rotastic isn’t a bad game. It even draws some comparisons to Peggle – but a Peggle where you can actually maintain control of the direction you’re going in. Unfortunately, it just didn’t pump the adrenaline to the extent that some other top-tier puzzle games did, and coupled with a few very distracting issues we can’t tell you to definitely go out and get it. That being said, it’s definitely worth a long look. The middle levels are quite good and the game as a whole is quite addictive. We can’t wait to get four friends together to get the full multiplayer effect, but it’s fun for a little while even with just the bots or one other person. Unfortunately, there’s just a lingering sense that this is a solid game that could have been a great game with a few tweaks. What we are playing: Week of September 25

Read More
What we are playing: Week of September 25
7 years ago
News

Read More
Bound by Flame pushed back to early 2014
Top