Usually, when you think of the types of games that get re-releases, they’re games that are pretty well-known even among people who never played them. That’s why Rogue Trooper Redux seems like such an odd choice – nobody seems to have heard of this game, let alone played it. I’m left to wonder why this re-release even saw the light of day. Maybe the original was a diamond in the rough, a hidden gem that’s been overlooked for the past decade, or perhaps it was just super easy to polish up and push out the door for a quick buck.

Originally released in 2006, Rogue Trooper Redux is adapted from the comic 2000 AD, an anthology series most well-known for giving the world Judge Dredd. The game adapts the story of lesser-known character Rogue, a blue-skinned supersoldier fighting a never-ending war on Nu-Earth. As the last surviving member of his squad (in a physical body, at least) it’s up to him to go beyond enemy lines and find out what caused the massacre that wiped out his allies. 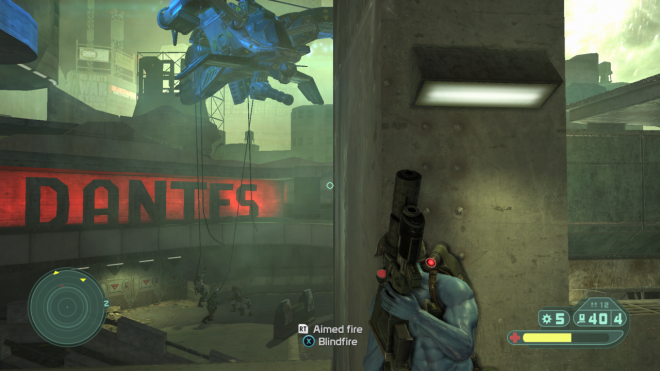 Campaign – If you’re a fan of angrily shooting things, the single-player campaign has you covered. The story really isn’t all that special, but Rogue and his comrades are fun leads. The game’s revenge plot against a traitor and an enemy army is really just an excuse to show off an alien planet and have you shoot everything in sight. The levels do a good job at feeding you new abilities and giving you scenarios open-ended enough that you can use whatever tools you like. There’s also a couple on-rails turret sections to mix things up, although I wouldn’t consider them a huge highlight. It’s a little on the short side but at least it doesn’t overstay its welcome, giving you just enough time to experience all its ideas before becoming stale.

Run for cover – Rogue Trooper Redux is a cover-based shooter, and for a game that originally came out before everyone jumped on the Gear of War train, it plays pretty well. You automatically snap to cover, and from there can either blind fire or aimed fire, the latter more useful but exposes you to danger. The cover mechanic is a little too sticky at times, and there’s no special way to move from cover to cover, but I never found that to cause a lot of strife. It’s simple but effective, and the shooting feels good to boot. You’re mostly shooting at grunts with weapons similar to yours, but they’re incredibly fun to take down. Most carry oxygen tanks on their back, which will satisfyingly explode with a carefully placed shot.

Options – The game gives you a full arsenal that allows you to approach combat in a variety of ways. Most of the time you’ll probably just run and gun; the game’s got a good array of standard but effective weapon types, and you carry them all at once. You can go in guns blazing with an assault rifle or shotgun, or go for a more long-range tactical approach with the sniper or mortar launcher. Rogue’s got a few tricks up his sleeves to help him in battle, including a portable turret and a controllable hologram that draws enemy fire. Going stealthy is a bit more rudimentary but still totally possible; you can quietly snap an enemy’s neck from behind and can equip your weapon with a silencer. It’s a play your way kind of game, so long as the way you want to play involves killing. 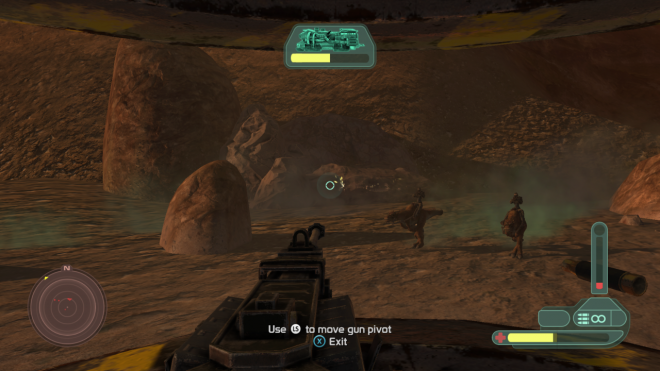 Multiplayer – The game’s online multiplayer isn’t doing too hot at the time of this review. Due to the lack of information while searching for a match I don’t know if the problem is ineffective matchmaking or a community that was dead on arrival, but finding a match is almost impossible. I did get to at least try out the game types available. Both are essentially co-op horde modes, where one has you defending a point, while the other needs to get from point A to B. These modes feel a bit more arcade-y than the main game, with power-ups and lives, and the focus on pure shooting with a much more limited set of skills really lacks the appeal of the main game. These modes are playable solo, but really feel meant for a full squadron.

Barely Redux – The game’s visual upgrade isn’t all that impressive. The character models look pretty good, and it’s all technically in HD, but everything else still looks stuck in the bygone original Xbox era. It certainly doesn’t help that the world isn’t much to look at; for an alien planet, most of the game looks like your average bombed-out cities and beaches. It’s almost indistinguishable from an ordinary military shooter which is smothered in grays and browns, although to the game’s credit it does have plenty of blues mixed in.

War has changed – There were some odd decisions and omissions in designing the gameplay. The most obvious is that there’s no manual reload. Instead, it occurs automatically when your clip is empty or sometimes when you stop firing. Weapon switching is brutally slow; you press Y to cycle through the list, then once you pick one you get a long drawn-out switching animation that makes switching mid-battle inadvisable. Getting more ammo is also a hassle, as you must first manually loot corpses to find scrap, then use that scrap to manufacture clips, grenades or upgrades. This would probably be a fine system if it wasn’t the only way to get more bullets for standard weaponry, thus forcing you to pause and manufacture more after every other shootout. The standard gameplay loop is bogged down by these bad decisions, and it’s too bad they weren’t streamlined for this re-release. 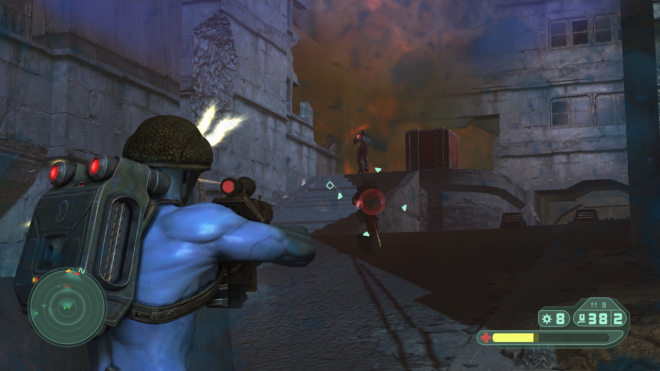 After finishing the game, the question still lingered in my head: why did this re-release happen? It’s not that I didn’t have fun with it, but it’s such an average game. It does many things well, but aside from the source material, there’s nothing here that makes it stand out. Age hasn’t degraded the game, although the edges do feel a bit rougher. It’s not a bad choice for those wanting some old-school shooting action, but anyone who passed on the game a decade ago can still overlook it now without missing anything.

Rogue Trooper Redux was developed and published on Xbox One by Rebellion. It was released October 17, 2017, for $24.99. A copy was provided for review purposes.