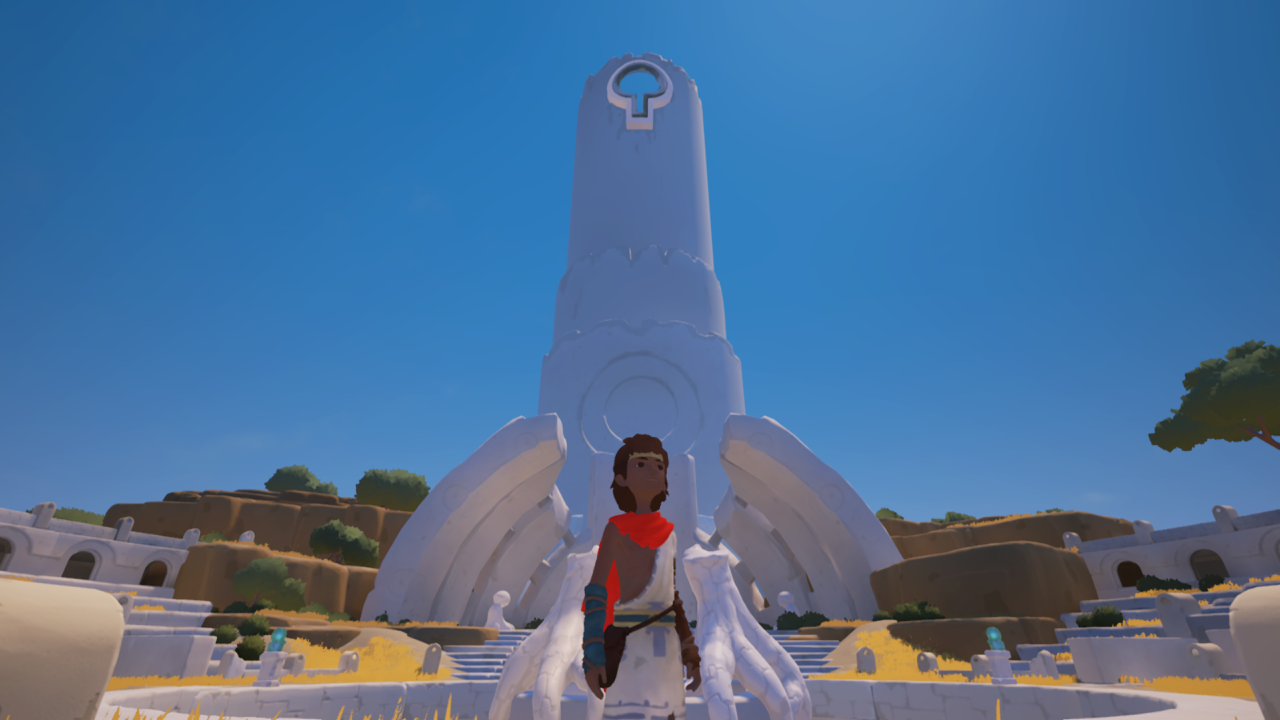 RIme begins with a young boy washing up on the shore of an island. The giant tower in the distance shows there is a significant human footprint, yet presently its only inhabitants are a few species of small animals. The little boy gets up and starts to explore, stumbling around the beach and clumsily climbing a cliff. Before long his path is blocked, but there are some glowing idols calling his attention. He does the what anyone would do in this situation – shout at the statues until they give him what he wants. I’m pretty sure the moral the developers were going for wasn’t “yell at your problems until they go away,” but the gameplay kind of supports that idea. Yelling just causes so many satisfying effects, from making fire glow brighter to shattering clay pots. If one of the major themes wasn’t meant to be that shouting at inanimate objects is good, they shouldn’t have made it so fun. 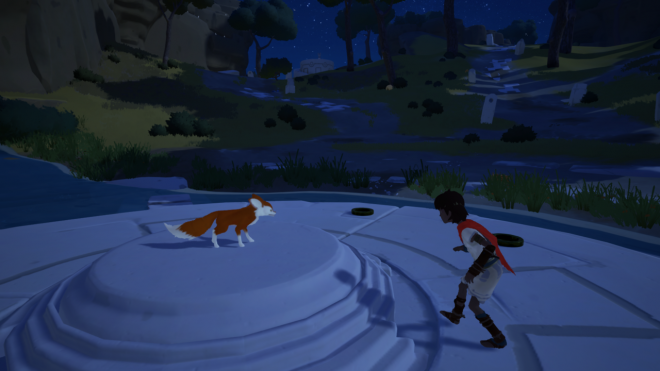 I took way too many screenshots – Let’s start with the obvious – this game is beautiful. Just look at these screenshots, they’re amazing. The vibrant colors jump off the screen; what would look mundane in any other game looks stunning here. The game also looks great in motion, in large part due to the detailed animation work that went into the main character. Beauty is much more than skin deep here; every sight and sound in the game goes towards building up a heartfelt and very human story. Told without dialogue or narration, the game starts off simple enough but gets incredibly deep as it reaches its final act. The majestic soundtrack adds a grand, sweeping sense of emotion to every moment of the game.

Fox on the run – Rime began its life as an open-word game, but although its scope changed to become more linear, it still feels like an open world. Each level is huge, filled with collectibles and mysteries off the beaten path. Every level is vastly unique from all the others, centering on different visual, emotional and gameplay themes. Despite areas being so open, the game does a great job at guiding you through it linearly. Beyond some smart level design that funnels you through the right path, there’s also a cute fox companion that will show you the way when the path isn’t obvious. After beating the game, you unlock the chapter select so you can go back and get everything you missed, which is worth checking out for a clever little reveal.

Make me wanna shout – The game’s puzzles are incredibly varied but revolve around central themes of sight and sound. Beyond being able to climb and move objects, you’re primary means of interacting with the world is your voice. By pressing Y, you can shout or sing to activate objects, a mechanic used in just about every puzzle. It’s used to activate switches, rotate spinners and shatter objects; for how simple the mechanic is it manages to be really fun to use. When you’re not around interactable objects using your voice causes the boy to hum or give a wordless reaction to the world around him, which doesn’t help with progression but is a great added touch. Puzzle variety is fantastic, leveraging perception, shadows, time, AI and many more concepts to constantly create new situations. Everything is presented in an intuitive manner, always presenting new concepts in a manner that’s easy to grasp. Situations tend to be pretty simple without being downright brain-dead, constantly remaining interesting and engaging without a huge amount of mental effort. 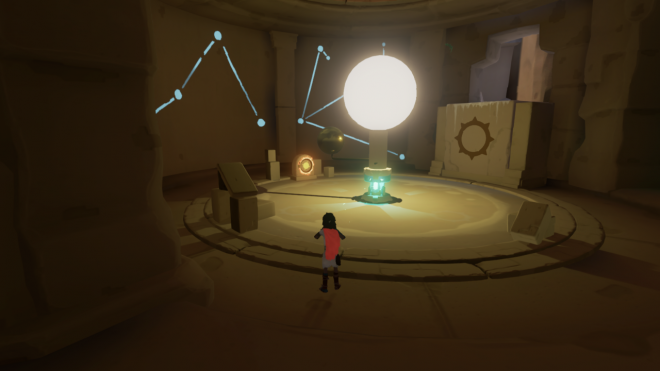 Walking simulator – The problem with Rime’s great art direction is that it knows it’s beautiful. This game has long bridges and winding staircases down to a science, making sure players spend ever second possible enjoying the scenery. There are a lot of instances where it feels like you’ve been doing nothing but walk (or swim) for a long time, with no puzzles, challenging platforming or major storytelling. These moments are just padding to show off the graphics, and can really screw up the pacing of the game. Sure, the art is great, but let me enjoy it on my own time.

Stumbling simulator – While basic movement functions well in a broad sense, I’ve come across a bunch of little issues throughout my playthrough. I’ve got caught on geometry while swimming, had fixed camera changes screw with the climbing controls, struggled to back-eject off ledges and the list goes on. Climbing in general just feels a tad too slow and stilted, awkwardly having to press A to do any sort of action while on a wall. Running is also awkward, as it automatically kicks in after walking for a while. It’s useful when you have to go long distances, but it can kick in at medium distances and make you accidentally run into walls and fall on your butt. Probably the most annoying bit involves finding your way through a maze of thin walkways above a bottomless pit in the dark. Approach an edge, and the character’s first instinct is to shimmy down and grab the ledge. Of course, you can’t see in this area, so this happens a lot. All the control issues come down to nitpicks, but boy did I come across a lot of them.

Button pressing simulator – Rime tries to tell its story without text or spoken word, which obviously painted the developer into a corner when it comes to crafting a tutorial. Their solution was to show button prompts on the screen the first few times you encounter something so that you’ll react and learn. That works fine in the opening sequence, but it’s continued throughout the game. Pressing Y to yell at a glowing object is outlined pretty quickly, but the game feels the need to remind you every time you see a new type of glowing object It reminds you to press B to dive underwater long after you’ve mastered the technique. The game already has some smart built-in visual clues to know what you can interact with, so these constant reminders seem useless. After a while they’re more annoying than helpful, practically handing you solutions before you have a chance to attempt the puzzle yourself. 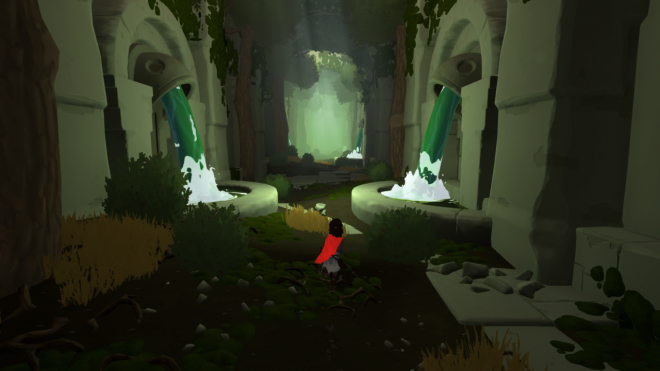 Rime feels like a game that honestly believes itself to be a masterpiece, but it falls a tad short of that lofty goal. It needs to tighten up its pacing, polish its controls, ease up on the tutorials and maybe add a few more puzzles for good measure. While it’s not perfect, most of its issues would be fixed with some minor tweaking. It’s still a gorgeous, fun, engrossing and powerful experience. From beginning to end, Rime is something incredibly special.

Rime was developed by Tequila Works and published on Xbox One by Grey Box Games. It was released May 26, 2017, for $29.99. A copy was provided for review purposes. Read More
The Sexy Brutale review: To die for
Top