Puzzle games are an interesting lot. They not only make you think but also to become an uncontrollable addiction. It’s all about being the best: having top scores, the best moves and lively competition on leaderboards. Popcap created the game that may have been infused with sugar for more addictive qualities. Don’t drink caffeine while playing this one, it could be dangerous.

Peggle was inspired by Pachinko, which is a huge sensation over in Japan. You fire balls at a series of pegs and must collect all of the orange pegs in the level, hitting extra pegs for more points. It’s a simple setup that takes a life of its own and soon you realize you’ve played too many games yet still crave more. 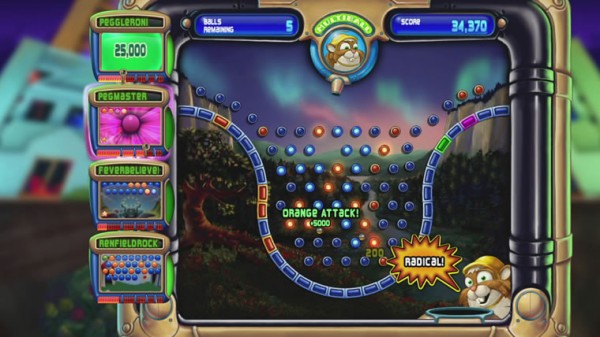 Addictive yet simple gameplay – The feeling of “one more game” is paramount in making a game feel longer and there’s a lot of that in Peggle. There’s so many ways to getting more points. Players can do anything from long shots to bank shots to lucky bounces for extra shots to gain high scores. There are also some pegs that alter the gameplay like direction help, extra balls or it could be anything that helps you in your peg collecting. All of these elements are wrapped up nicely and provide players with the thirst for more points.

Wonderful presentation – In the game’s opening the sun begins to rise and you’re greeted by a unicorn. Going into a puzzle game after seeing the introduction just makes you wonder where they’ll take your imagination. All of characters, scenery and art even in the tables are detailed with nice, well-lit animation and are full of life. The immersion helps make this puzzle experience breathe full of life.

Off-kilter music and sound – From the calming music at the beginning to Ode to Joy blasting after you hit the last orange peg, the music is as charming and wild like the other sugary elements. They like to go from 0 to 60 in seconds flat with the music, starting out with a calm elevator-y tune with peg noises differing by color. But they want to make you feel like when you finish the level, it’s a spectacle of a great accolade and it’s great to make completion all the more rewarding. 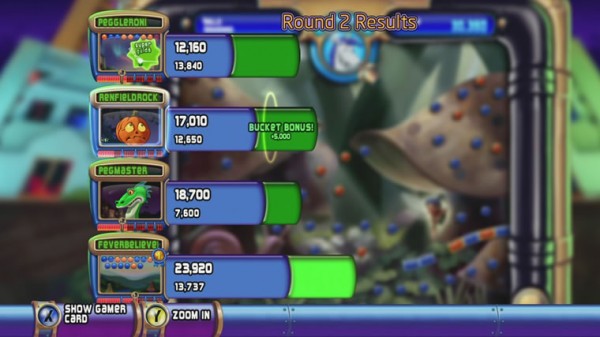 Addiction – Yes it’s a good thing but it’s also a very bad thing. You’ll play a bunch of games, win a lot of points, use the dragon and before you know it, 3-5 hours went by in seconds flat. Be careful when you play this game, while it’s a great time-waster, it can also be a deadly distraction. If by some crazy chance you have an Xbox 360 at work be sure never to play Peggle. The boss won’t like your drop in productivity. 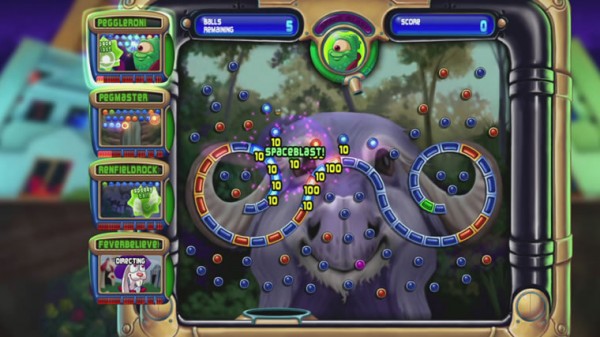 After unicorns, dragons, magic bunnies and whole lot of points, you’ll catch the Extreme Fever before you know it. Peggle is quintessential for your Xbox Live Arcade collection as a casual simple puzzler you can play whatever mood you’re in. Just be careful to watch the clock so you don’t find the whole day gone before your eyes. Popcap has created a most addictive puzzler and you’ll just want more of its sugary contents.