Afterburner Climax was developed and published by Sega. It was released April 21, 2010 and retails for 800MSP.

Afterburner Climax pits one sole fighter pilot against an entire air force of opposition. It’s classic, arcade style gameplay; players must down hundreds of planes in a matter of minutes. Far from being a simulation Climax takes the idea of dog fighting and pushes it far beyond the logical extreme. The end product is a super fast and beautiful experience that is over all too soon. 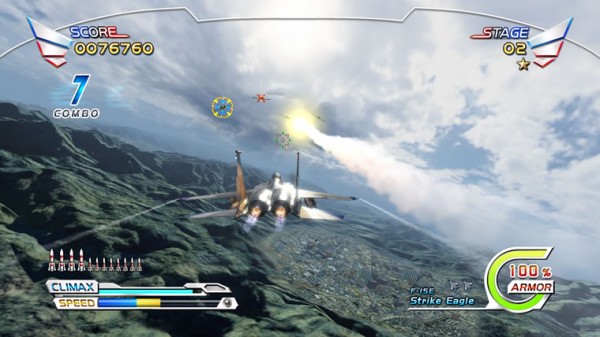 Beautiful look – The entire presentation and look of Afterburner Climax is top notch. Beautiful and colorful, this game is a treat for the eyes. Nicely modeled planes and a colorful environment fill the screen. It is a nice touch to be able to modify the colors of your fighter as well. The explosions are convincing and your armory certainly looks lethal. Everything on screen is polished and beautiful. It also has the telltale look of a Sega game we love so much.

Great sense of speed – A game about jet planes should feel fast, and this game does. When you hit the afterburners to escape an enemy plane you really feel that you’re on the brink of losing control. Flying around mountains and through tunnels is as white knuckle as it gets. So few games convey speed well, but Afterburner Climax does it effortlessly.

Tight controls – To perform well in a game this fast, excellent controls are required. We found them to be tight and responsive. Our only complaint is that we occasionally barrel rolled without really wanting to. It didn’t ruin the game, but it was a surprise at first.

Arcade gameplay – The gameplay here is simple and to the point; shoot down the enemy with your guns and missiles. Afterburner Climax sticks to this formula and does it well. One innovation is the Climax Mode. It essentially works like bullet time and allows you to effectively destroy everything on the screen in slow motion. It’s a cool addition that’s a lot of fun to use. There’s good reason to shoot down the planes quickly as well. Continuing a chain of kills will earn you a multiplier that will give you a serious score boost. The letter grade ranking system at the end of each stage is a nice touch as well.

Vintage Afterburner – The gameplay formula for an Afterburner game hasn’t changed much over the years. Fortunately this is embraced in Climax. There is a lot of nostalgia to be had for veterans. A particularly welcome addition was including music from Afterburner II. 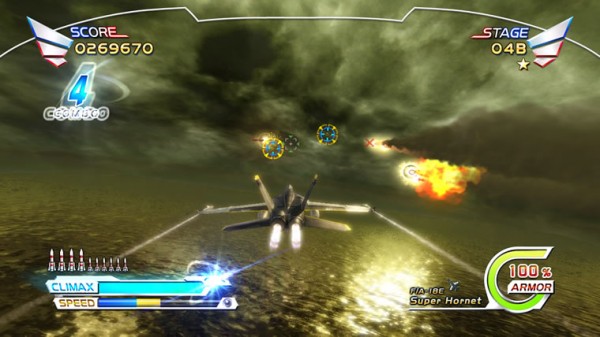 Over too fast – Sometimes it comes as a compliment to a game when fans complain that it is over too fast. It means that they don’t want the game to end. This isn’t the case in Afterburner Climax. It’s ridiculously short. There are a few branching paths to explore and power-ups to unlock but that doesn’t change the fact that the game is short.

No thruster chair – Those lucky enough to have played Afterburner in the fully functional thruster chair know how much it adds to the experience. Obviously this could never be a peripheral for home use, but there’s certainly something missing without it. 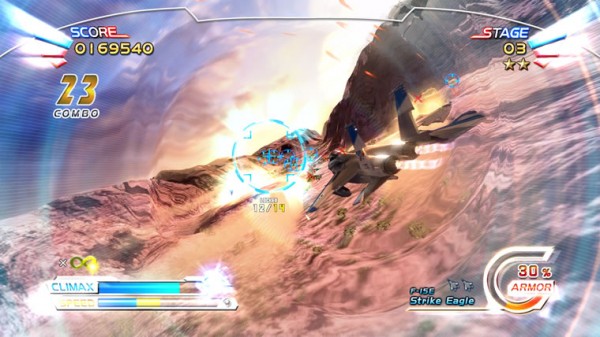 Afterburner Climax is a fun ride that any gamer will be able to enjoy. Despite its short mission there’s plenty of incentive to replay it and gain all the power-ups. Branching pathways and multiple endings give plenty of content to explore. For all of you achievement hunters out there this game is a very easy 200/200 as well. If fast fun is what you are looking for then Afterburner Climax delivers.