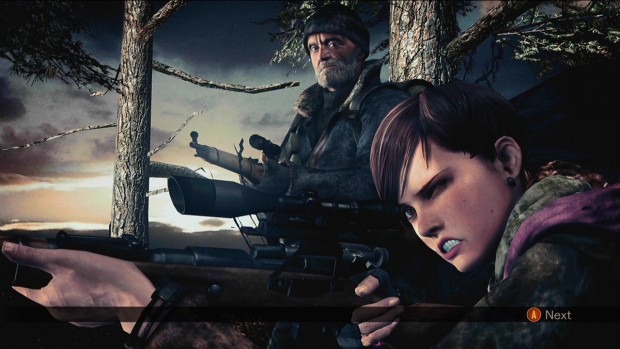 Ehh, it depends. I mostly recommend it only if you’re looking to see Revelations 2‘s storyline expanded.

The gameplay takes you through different parts of the main episodes, adapted in a manner that suits the narrative of this alternate take on the game.

The second hunting segment is a bit awkward in that when you’re spotted by the offending monster, the timer drops to 30 seconds and does not reset even if the creature is killed. Without bearings of the exit, it’s quite easy to fail, and with your ration supplies acting as the continue system, it’s very easy to run out of continues if you’re not careful.

The second combat zone features a significant amount of revenants and flingers as well as multiple durgas. Each of these monsters is pesky in its own right, making fighting them together a long protracted battle that’ll leave you worn out and turned off of playing this mode after finishing it.

One benefit of completing The Struggle is unlocking the old man for use in Raid mode. I can imagine most players passing on using him, but I plan to, if only to spam his sorry command, which says “That was your fault” in future co-op Raid mode play sessions.

My recommendation is for fans to play it once on Casual and call it a day. It’s nice to see Moira grow up and become a more battle-hardened individual, but additional play sessions are better spent on playing Raid mode than the main missions.