It’s been known for some time that the best thing to keeping the brain healthy is to test it consistently. Using even the most minor of brain functions can help keep the brain functions running and overall improve motor skills. Whether you’re filling out Sudoku or solving for X with a math problem, there are many different fun activities to help peak your interest. The first Q.U.B.E. game was a delightful start to the series, and with the upcoming sequel Q.U.B.E. 2,  the developer, Toxic Games, continues to push your brain with a little shape and color.

From the start, you’re met with a short sequence between the main character Amelia Cross and her husband Robert Cross, who are communicating to each other through a radio frequency as you steadily pace through a dust storm in an undisclosed location. As you press further forward, you start to see Amelia fading in between consciousness to the point she eventually blacks out. Amelia awakens in a makeshift cell to a radio transmission from one Emma Sutcliffe. Emma is quick to offer some details as to Amelia’s location and the overall current situation, but the questions answered only make more questions. 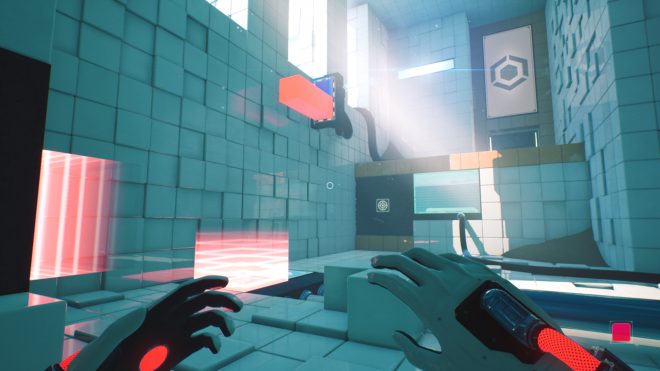 As with the first game, puzzles are completed by manipulation of specific color tiles, each of which has a unique ability. The color is splashed on a white tile and then interacted with in some way to illustrate it’s use. The left hand is used to splash on a particular color to a tile, and the right hand is the essential “use” key of the operation. In regards to the colors, players start with the suit’s default color blue, which when applied to a tile acts as a launch pad. The red color you pick up a little bit down the road is the main function of a platform. When applied to a tile and interacted with, it extends out and can be stepped on or used to hold up objects. The green ability spawns a solid green cube which is useful for holding down switches or as a wrecking ball in other situations. While it sounds convoluted, when set in motion, everything comes together like a symphony and orchestrates itself very well.

The way the different color elements work is phenomenal. Placing red on the floor will make a vertical platform, while on a wall the platform is horizontal which is useful in blocking objects or making a small ledge for you to stand on. The blue platform can launch you vertically, horizontally. The green color is the color to mess with when you want to experiment with physics. The cube that spawns from a green tile follows the laws of gravity, so placing it up in the air will cause it to fall to the ground. What is interesting, is placing a green tile up high, a blue wall tile right below it, and an orange horizontal platform across the way. When you spawn the cube in, it drops towards the ground. However the blue tile interferes and causes the cube to bounce horizontally across the room, at which time the cube lands on the orange platform, and makes a stairway that can potentially guide you to the exit. The Rube Goldberg-esque physics problem solving is always a joy. 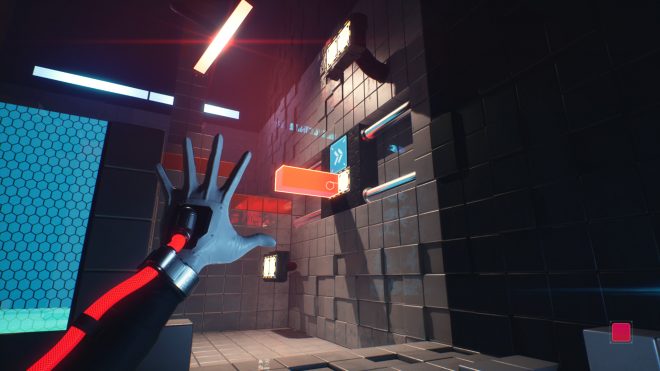 In later rooms, you’re met with a new concept to the series, shifting walls! These walls have a blue tile with white arrows, usually pointing in 1 of 4 directions. (Up, down, left, or right). Interacting with this tile with your right-hand causes the wall to shift in that direction. Once it reaches the end, interacting with it again moves it back to its default position. At this point, the game has taken another step up. It’s not just about solving the puzzle and getting to the exit. You still have time to think about what actions you want to take to get there; however, the overall execution will require you to be in constant motion. The steps required to solve the puzzle require timed interaction of not only the tiles but of the walls as well to get you where you need to go. One false move and you’ll find you need to start the sequence over. That might sound frustrating, but personally, after I had strung together all the moves and the pathway to the exit lie open to me, the feeling of what I had just done was ecstatic.

In some rooms, there are fans that are on by default and will push anything that stands directly in front of them forward. If a fan is on the ground, it will push objects (or humans) upward towards the ceiling.  The fan element is a concept made so simple but placed so purposely to cause chaos and interrupt the very infrastructure you are trying to surpass. It can really expand the game even further beyond static puzzle solving. 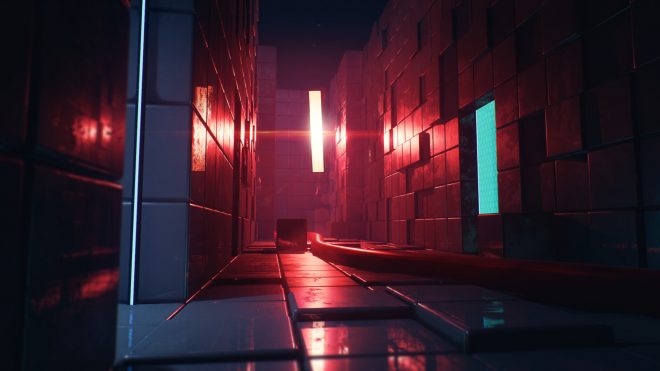 There are times when I’ve come up against a certain puzzle that had me a little scrambled, but never to the point where I felt utterly stuck. In most cases, I was shown where I needed to go. However, it was up to me to put the cogs in the machine and run through it. One great aspect the game does well is offering a challenge that’s enough to make one feel accomplished after they’ve surpassed it, but not so difficult to the point where someone would need a guide to find a solution. The key to success lies in recognizing your surroundings, seeing how each area operates and putting a plan in motion. The puzzles add to the overall plot of the game instead of acting as a barrier.

I was able to play through a good portion of the game, but it leaves me wondering how much further will the rabbit hole go? How much more in-depth will the puzzles become? There’s plenty of room for potential. I would love to see some tie-ins to the original game, perhaps even have some light shed on what has happened to the original protagonist, and the events leading up to this sequel… All these ideas have me excited for when the game fully releases early this year.

Check out a new video for Storm

Read More
Check out a new video for Storm