The Civil War table for Pinball FX2 is the latest in what is now a large string of Marvel-themed pinball tables. Zen Studios continues to innovate with each new release — the improvements they have made since earlier pinball tables are evident here. Civil War is oozing with nods to fans of the comic books — this might be the best-themed Marvel pinball table yet, and it shows through in the very polished presentation.

Multiball for everyone – The Civil War event begins as the result of civilian casualties at a public school where superheroes fight supervillains. The very beginning of the table offers an optional multiball event where the player attempts to round up survivors. As soon as one ball is lost, the event ends; but because the table tracks this score separately from the total score, it’s as if a whole bonus game exists at the beginning of every round of pinball. Your highest score in the Stamford Multiball event is added to your score each game, so multiple playthroughs of the event are meaningful even for high-scoring players. It’s a great move by Zen Studios to allow casual or unskilled players to experience the intensity of multiball play, and it fits in well with the Marvel universe.

Differentiation between superheroes – After multiball, before the standard game begins, players must choose to side with either Iron Man or Captain America, the two faction leaders in the comic book event. Which choice the player makes will affect how the table plays out. While it’s not quite two tables in one since the table architecture doesn’t change, the announcer, theme music, and cameos from other Marvel characters are all altered. This is a good effort towards following the plot of the Civil War arc, and will be very engaging for fans of the comics.

Stellar presentation and table design – The clear red and blue colors for the ramps help make identification of goals very simple, which allows players to focus on how to position the ball without wasting time figuring out where targets are. In terms of table mechanics, the two main ramps allow for positioning of the ball to either flipper. This is amazing, as it gives players choice over how to position the ball as often as possible. This table has a fairly high skill ceiling, so improved ball control is a welcome addition. 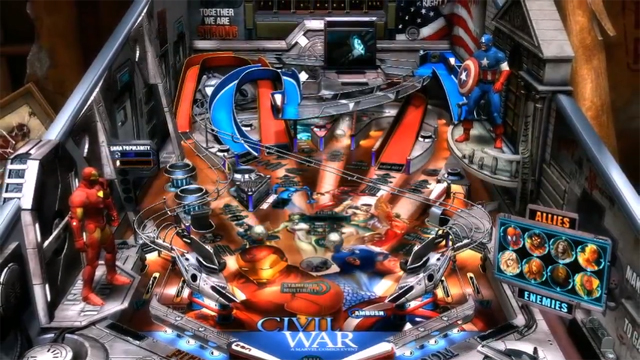 Quick pace of recruitment – While normally a fast-paced pinball table is a plus, players find themselves in a timed competition with the other faction to recruit Marvel superheroes for their faction. The timer is a little too short, especially for casual players — keeping up with the opposing side is a challenge, let alone outright outpacing them. As a result, this is not a table for new players.  Similarly, while the ramp control mentioned above is a huge plus for proficient players, there is zero deceleration of the pinball as it exits the ramp, which will fluster some players until they adjust over the course of several games.

Lackluster “fight” sequence – The throwdown between the pro-registration faction (Iron Man) and the Secret Avengers (Captain America) should be the highlight of the table. When the fight sequence is triggered, there is a beautiful cut to a dark red that highlights the Civil War logo on the front of the table nicely, and things appear visually to be set for an incredible climatic battle. Unfortunately, it is not entirely clear how to make progress in the fight sequence, or how relevant your ally/enemy count is. It’s the one poor mark in an otherwise fantastic table.

While new players may be put off by the sheer speed of the Civil War table, this table will please both pinball wizards and Marvel fanatics alike. Having the option to play multiball every game makes great strides toward inviting newer players to take a shot at the more difficult table. Hearing Spider-Man quote directly from the comic book while playing as Captain America was an incredible moment not to be missed by anyone with an investment in Marvel’s world.