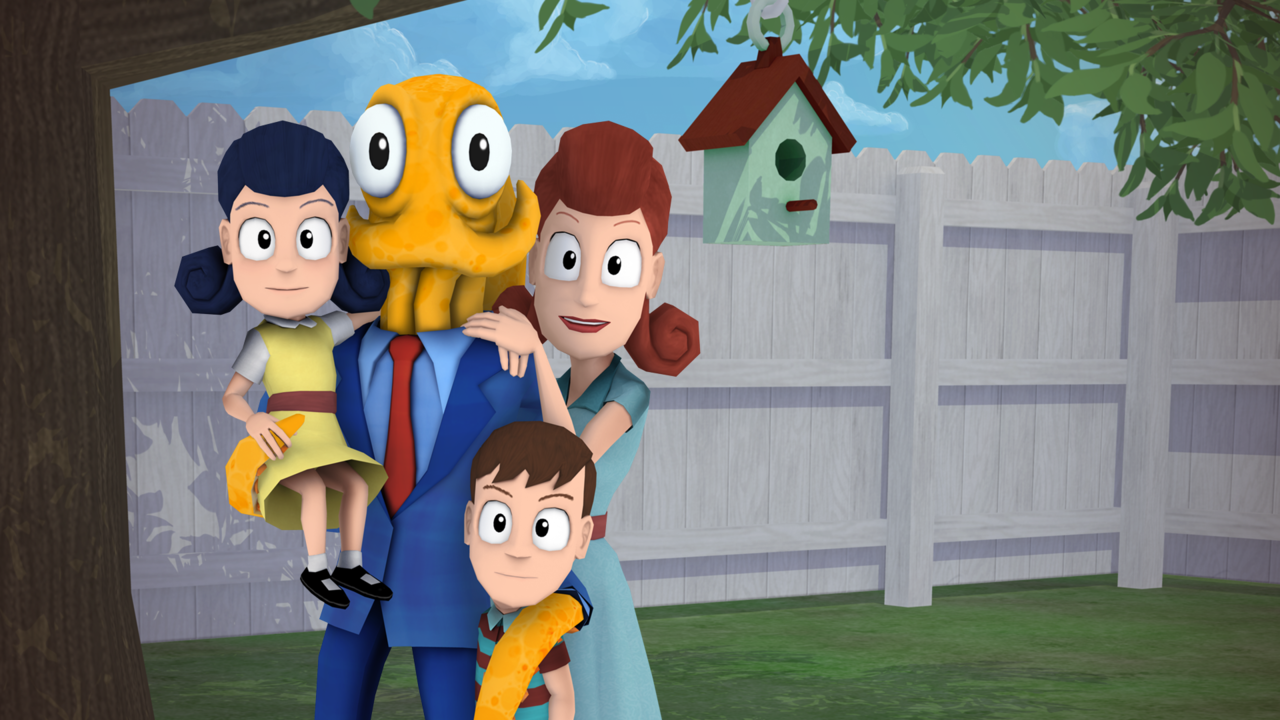 They say the suit makes the man, but Octodad takes that old idiom to the extreme. Somehow, an octopus was able to get married, raise two human kids and become a functional member of society all thanks to some nice clothes and a good attitude. I don’t know what’s more amazing: that the entire world is oblivious to his true identity, or that an octopus actually makes a very good father.

Octodad isn’t a new game; it’s been making the rounds on other platforms for over a year now. The Xbox One release remains the same its predecessors, with the added benefit of having a year’s worth of updates and new content out of the gate. If you already have experience with the game, all you need to know is that the game makes the jump to Xbox One perfectly. If you’ve yet to experience life as a jiggling no-longer-aquatic creature, keep reading. 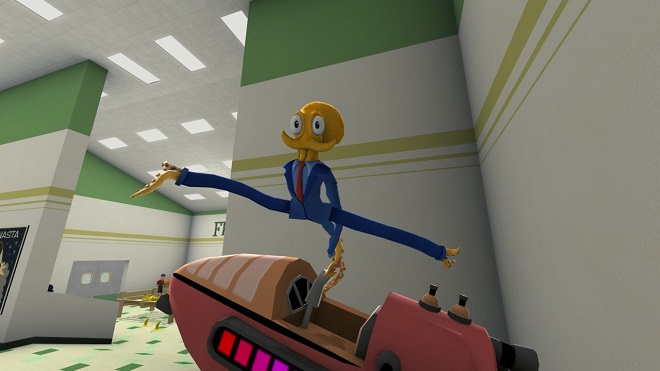 Squishiness – We may take our daily rituals for granted, but acting like a human can be really hard for someone with no bones. Octodad has you controlling the titular character’s tentacles as if they were human limbs, walking around and picking up objects like any normal person would. As octopi aren’t known for their rigidity, you’ll be doing a lot of slipping, sliding, squirming and knocking things over. While he’s practically a one-man Three Stooges show, for a character who’s constantly under attack by his own physics he controls fairly well. Completing your objectives is always within the realm of possibility, it’s just that the path to get there may turn a bit messy.

Nobody suspects a thing – While the overarching goal of the game is to act human, there’s a lot of leeway in term of acceptable behavior. Basically, as long as you’re not hitting people or getting spotted by marine biologists, you’ll get away with almost anything. The best way to play the game is to mess around with everything, as each level is built like a physics-filled sandbox. There are lots of fun toys hiding throughout the environments, ranging from wearable hats to ridable Segways. Straying from the beaten path is always a rewarding experience, as you’ll never know what you’ll find.

Fun for everyone – Octodad fully embraces its unusual concept. Humor is not only part of the gameplay, but it’s baked into the world around you. Everything in the game feels like it was pulled straight out of some children’s cartoon, right down to its incredibly catchy theme song. The writing and story are goofy, filled with puns and surreal logic. The whole experience is head-to-tentacle silly in a very kid-friendly way, making it a game anyone can enjoy. 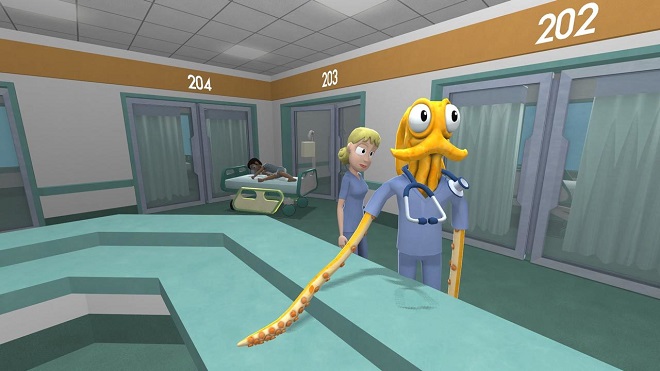 Precision – While much of the game is about being clumsy, there are times when the game asks you not to be. In a game where controlling your character is intentionally awkward, it makes sense that walking up ladders or across tight platforms isn’t easy. The legs have a tendency to gently slide towards the body if over-extended, making it hard to take your time. The later levels can get a bit frustrating, but have some leeway built in if you get stuck. The same can’t be said for the collectables, as some are hidden in the most devilishly out-of-reach places that feel almost impossible to get to. 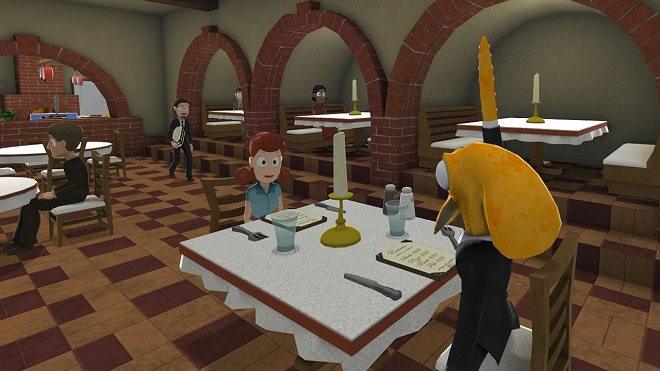 Octodad is a fun, physics-filled romp that does a great job of creating a story and a game around its unique central character. While there are some moments of frustration, they are easily lost in a sea of goofing off and accidental destruction. As much fun as I had with this game, reviewing it was a pain, as its ultra-catchy theme was constantly popping into my head. The game’s definitely worth a look, as long as you’re not afraid of earworms. 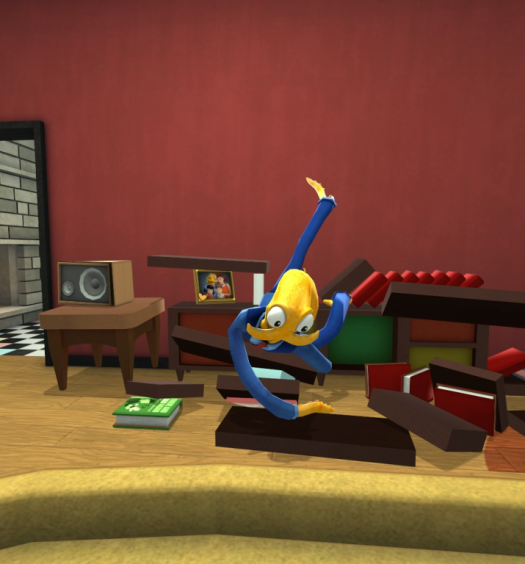 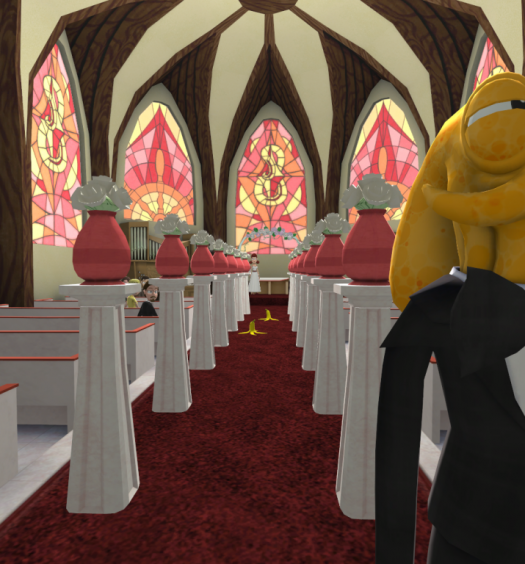